Today was a bit rainy so not much work was done at the boat. Even with lightning flashing around the area, I still setup my metal ladder and visited the boat for a moment. Probably a good thing I did. I found a screw used for one of the hand rails above had drops coming down. I will need to reseal that screw and probably should do all of them while I'm at it.

Here, you can see the drop showing up the the discoloration of the wood nearby. The drops were pretty steady and this part of the handrail was not covered by the tarp currently on top. 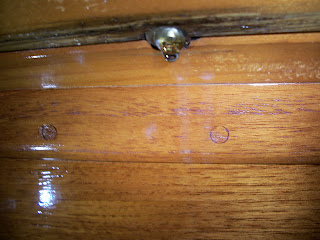 Good news is the gaskets on the portholes are working nicely. Here, you can see the water collecting at the bottom. I used a flashlight to find water dripping and everything was dry. 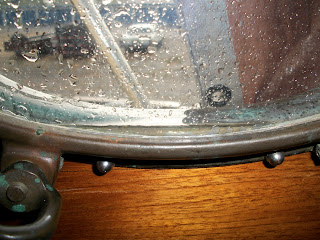 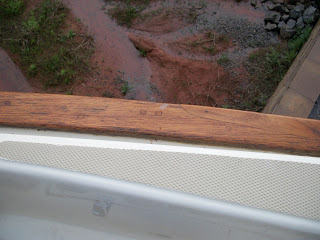 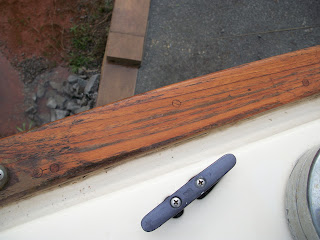 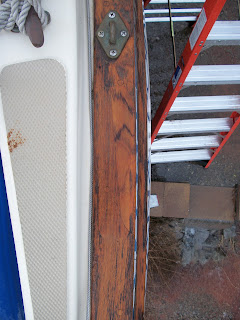 Something else I noticed on the boat is a thru-hole item. I had to look it up and found that it is a transducer used for depth, Airmar P319. I thought it was odd that the cord was still coiled up so I assume that it was a fairly recent upgrade/addition from a previous owner. I looked at the compartment where the cable would be routed and saw a plastic housing that might have held an old transducer. This other one had the cable routed toward the stern. So, another project, take the old plastic housing and cable out and route the cable for the mounted transducer. Oh and I found out the cable connects to the Garmin 546S. 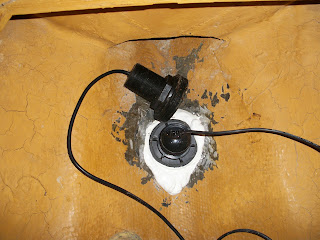 Lastly, I got a new battery switch in the mail today. The case was slightly deeper than the old one so I had to go to the store for longer screws. I'll update how that looks in another post.
Posted by Dan at 10:06 PM