First, I want to show my idea of another project, a deck mounted vent for a new head. 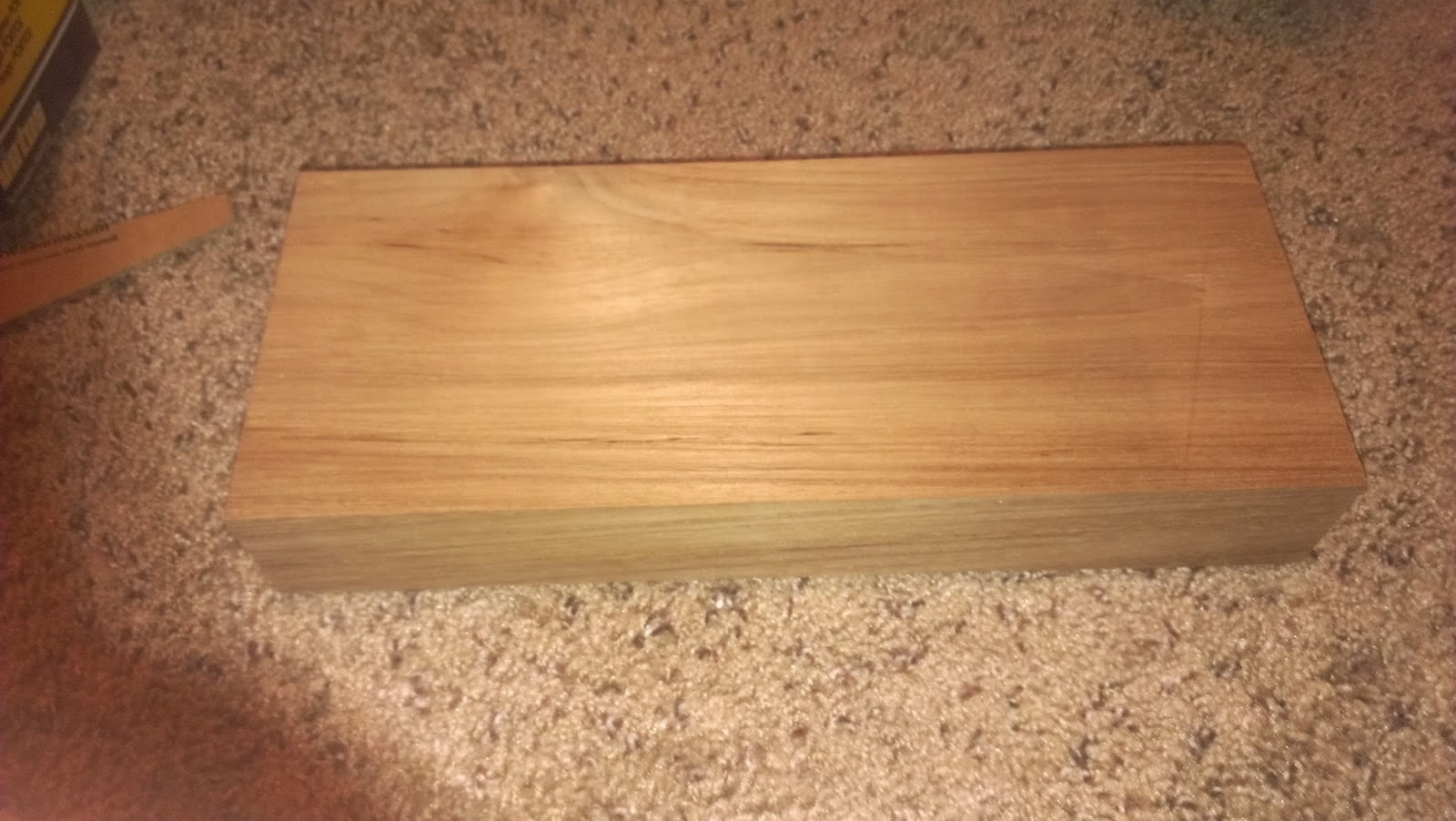 I cut it down to a 5" square that I will shape to the curve of the deck. I also plan to install a Vetus Mushroom vent to it. Others have mentioned I should use a dorade box, but this way I'm going will be lower profile and I think better suited for my boat. I mainly placed the block to show size and placement. 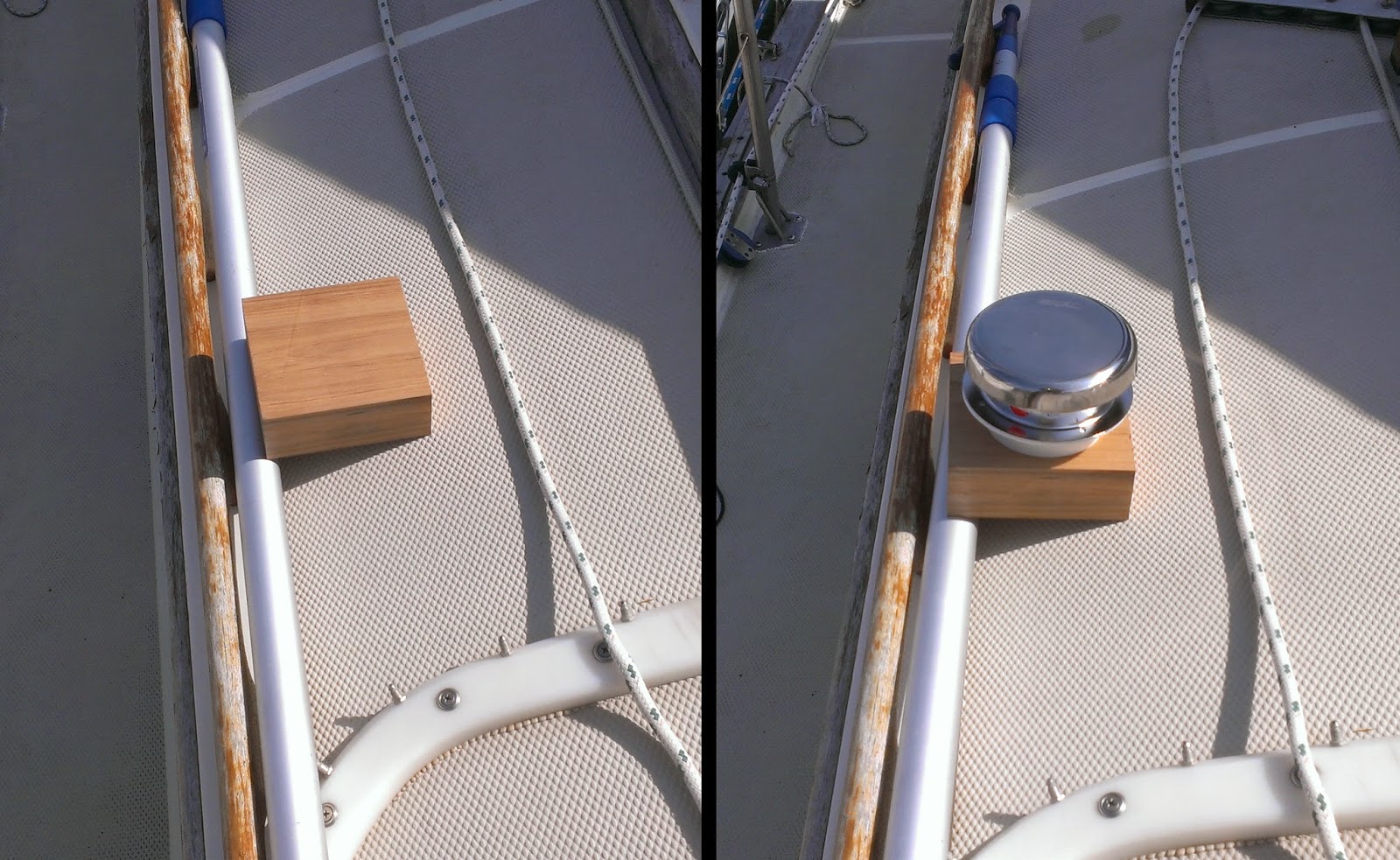 The main project was to clean the fuel filters. I found some nice instructions for the Racor fuel filters from a guy known on boating forums as Maine Sail. What was nice is the picture showing the gaskets and what they go to. I guess the seal kit was supposed to come with it but the two kits I got didn't have it. I printed the picture and placed the gaskets over it to make sure I had everything ready. 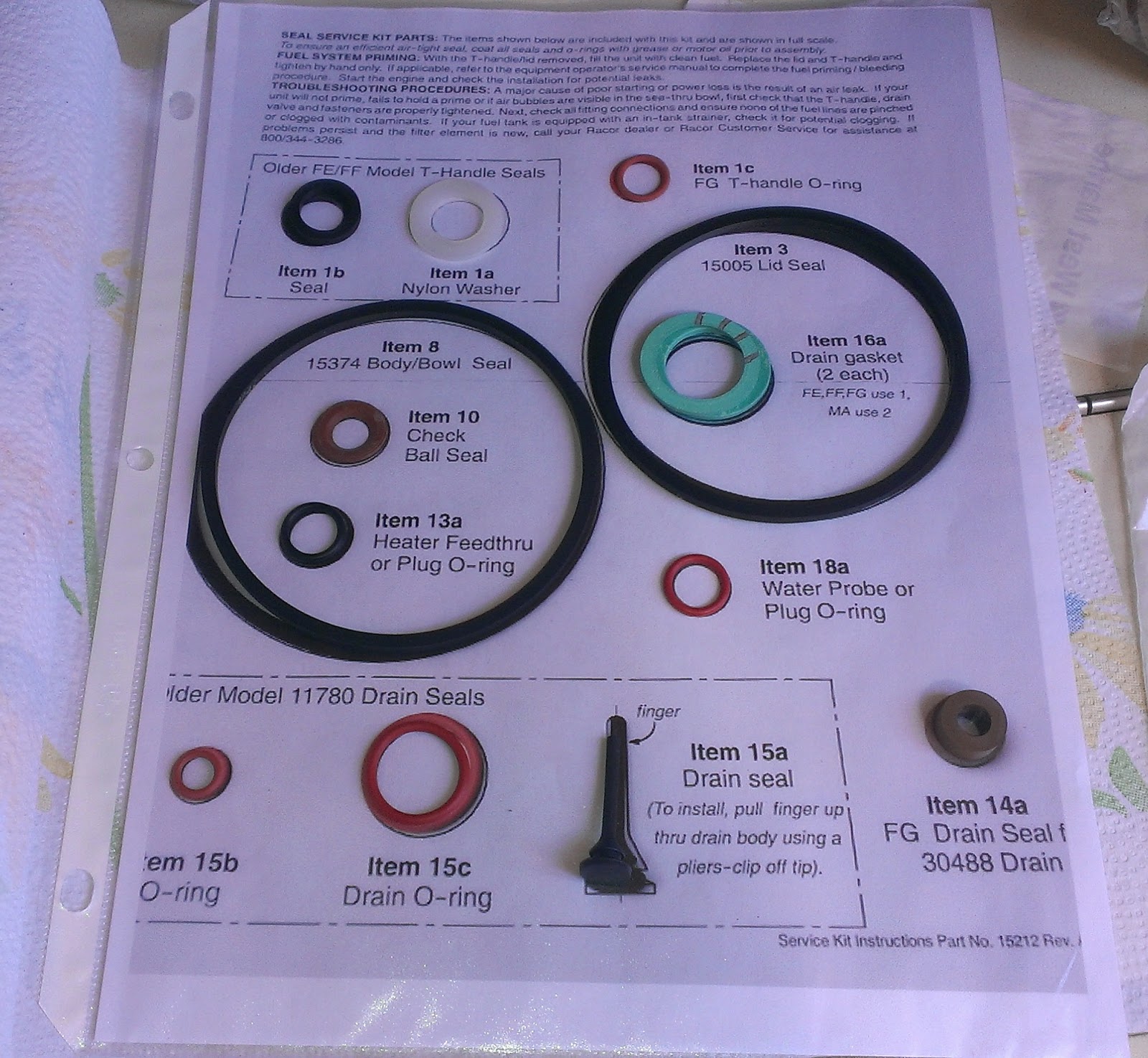 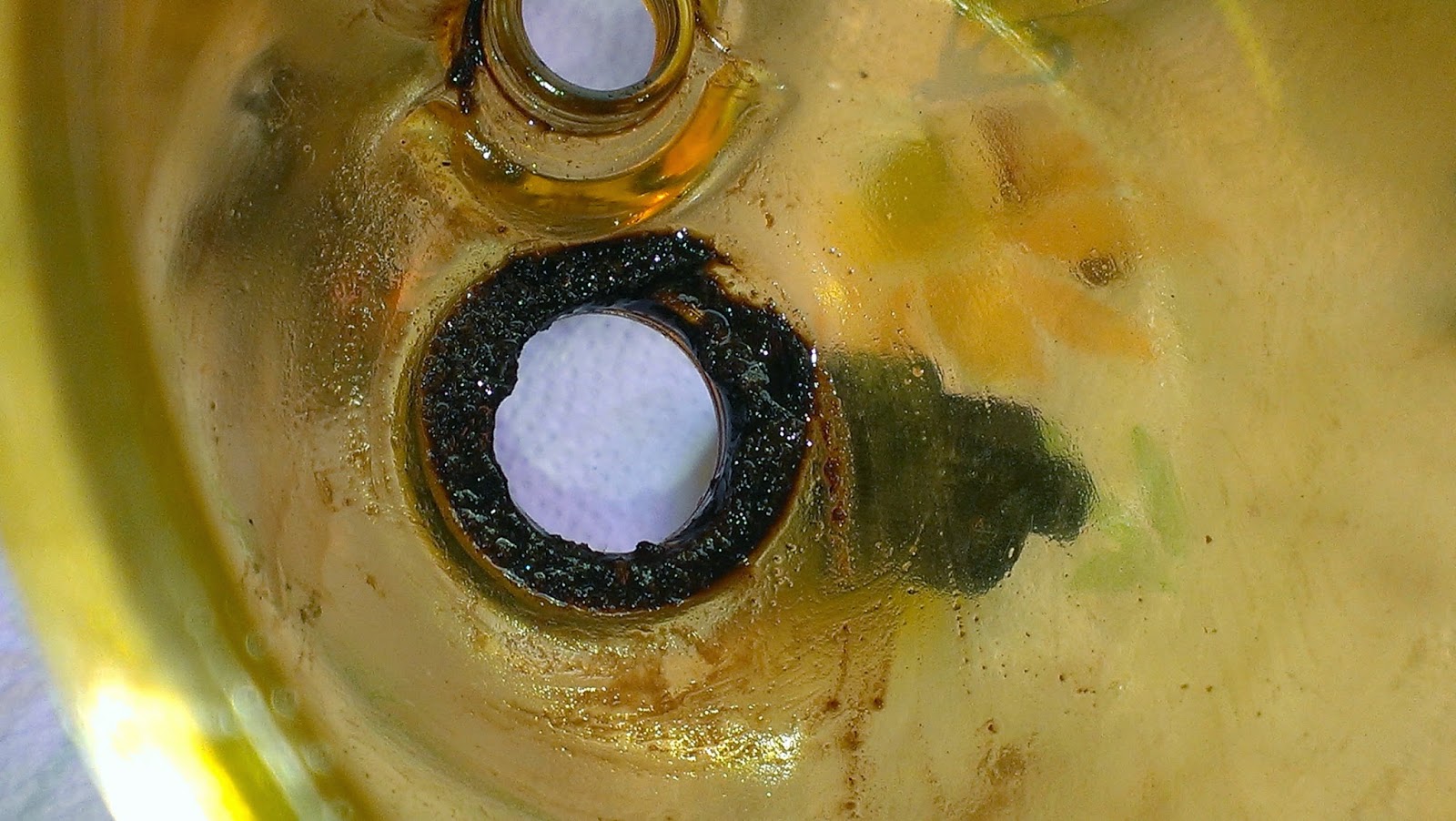 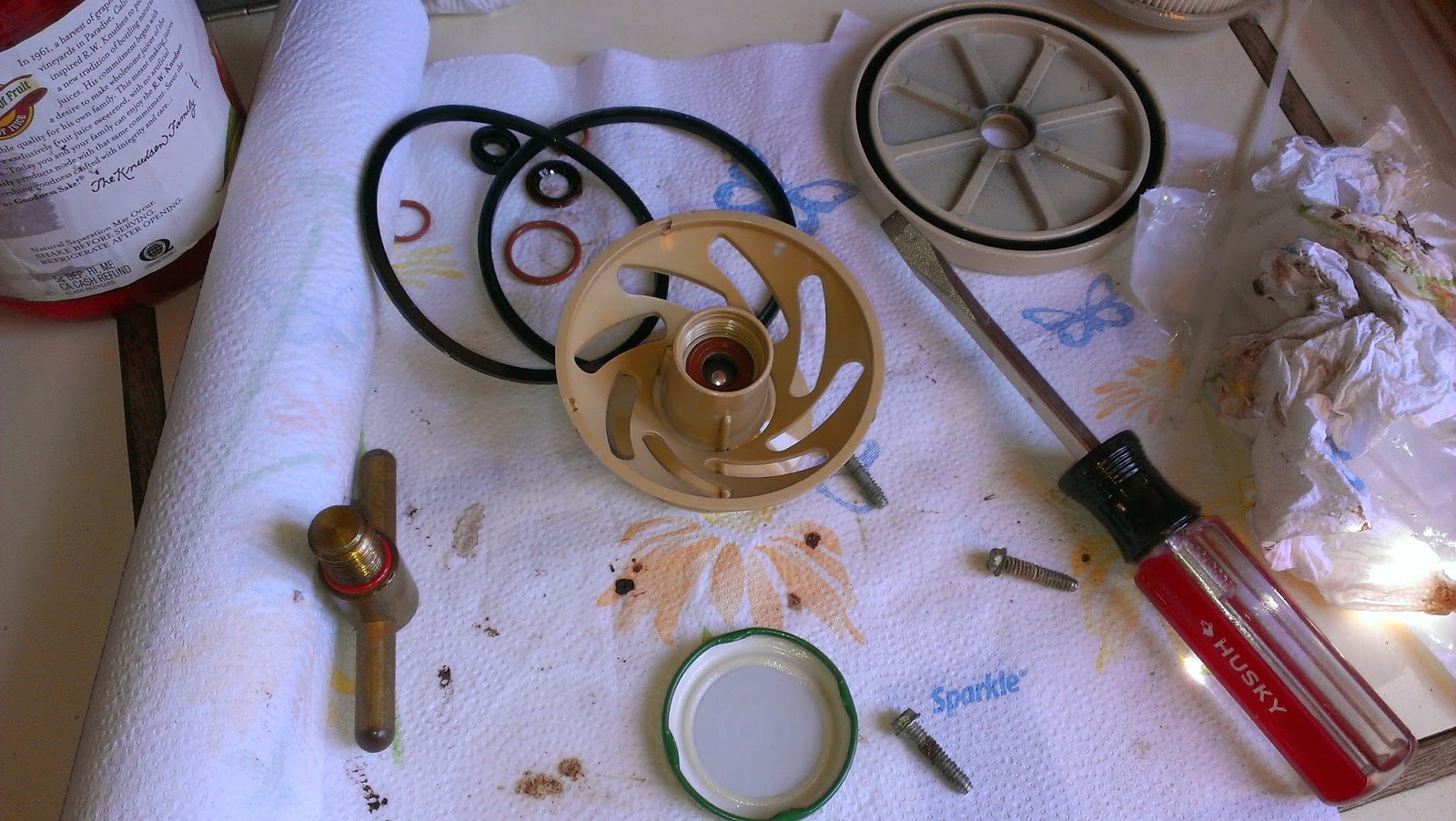 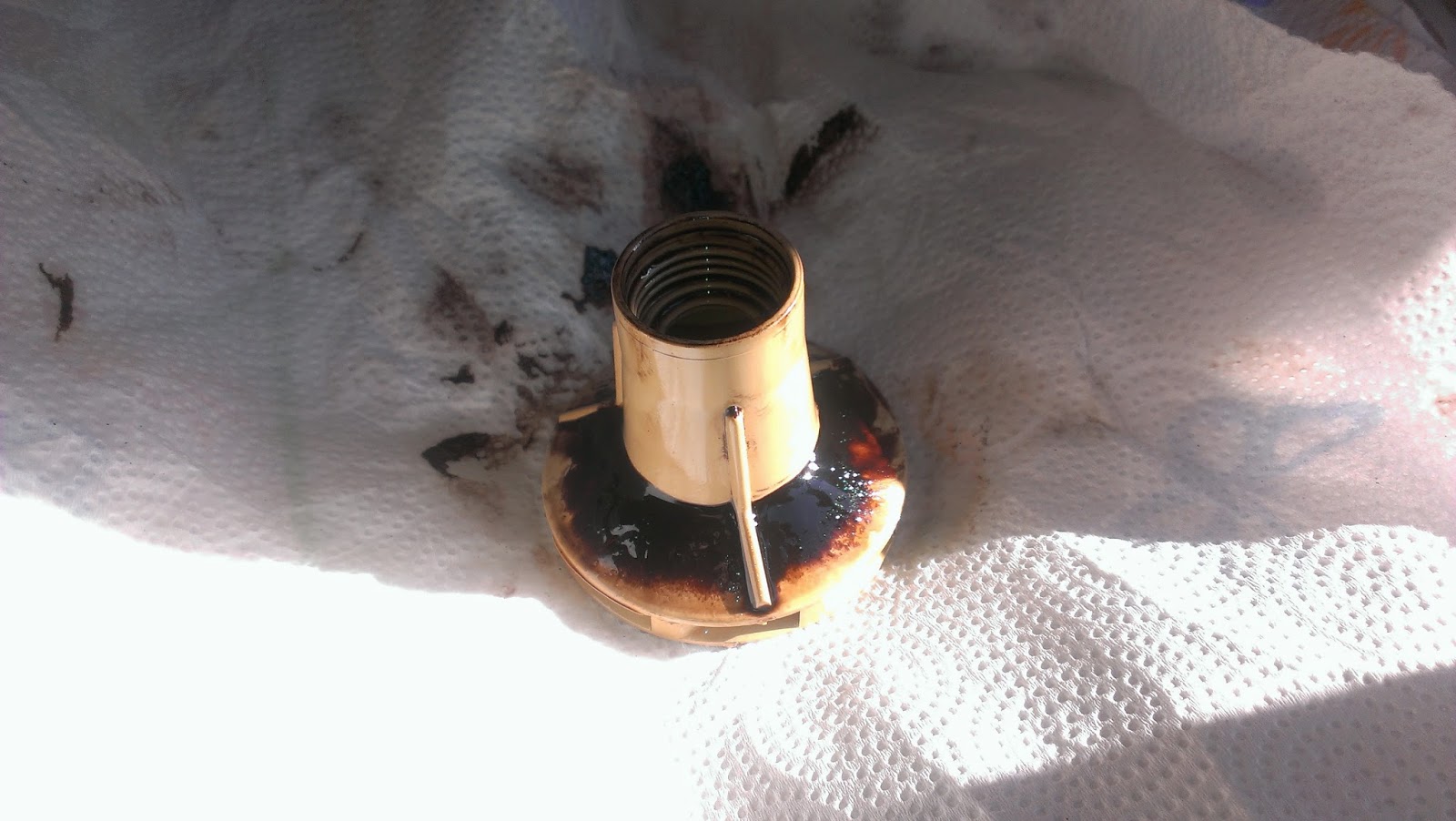 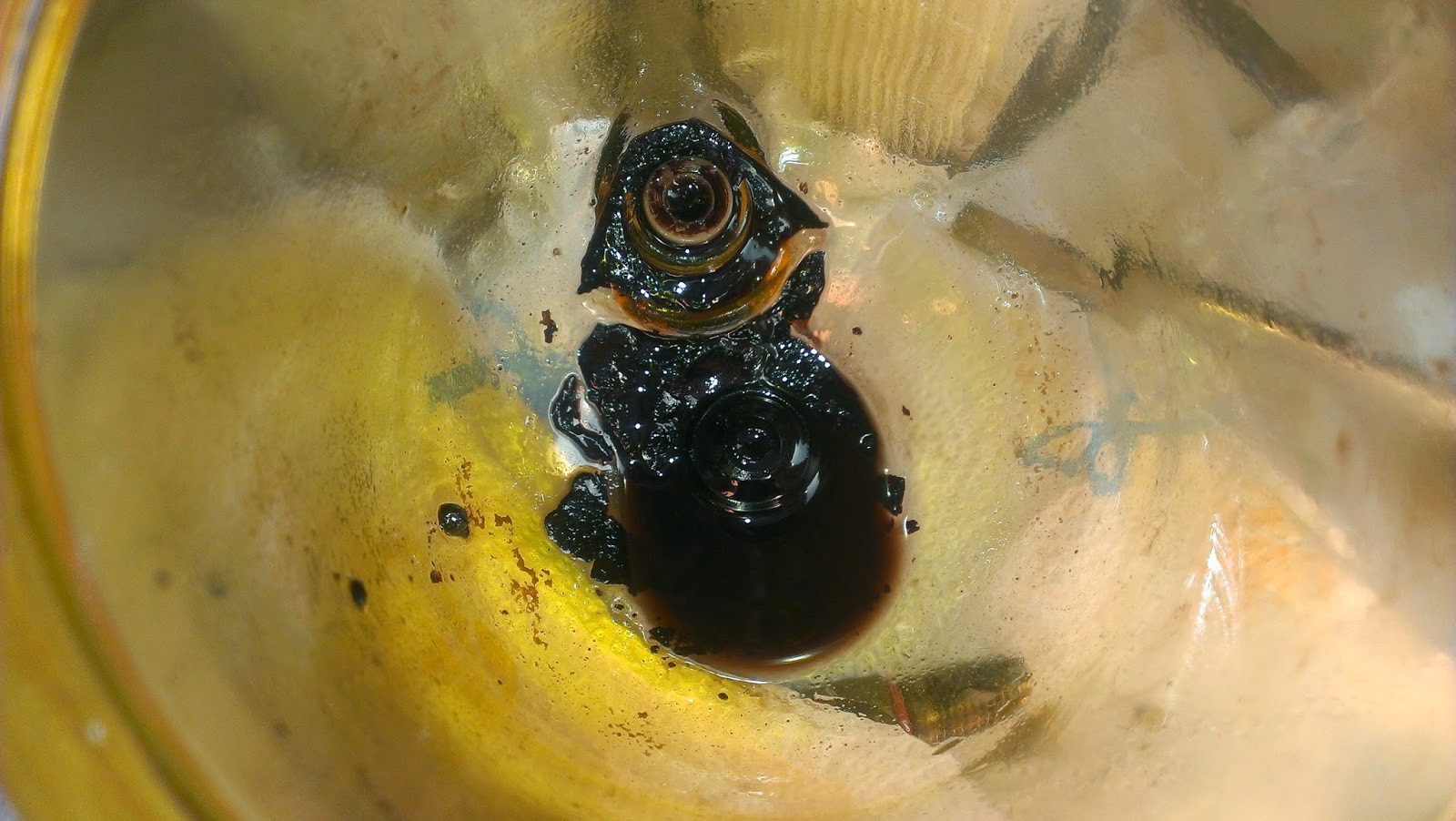 It just shows the importance of regular maintenance or servicing something when it needs it. I think debris like this could have made its way into the engine causing it to stall. Definitely not a good thing if the engine is needed in a hurry. Since getting the 3gal tank, the engine has seemed to run better with cleaner fuel, so hopefully cleaner filters will help too to keep it running.

The last thing I did for the day was to mix up some epoxy with some low density filler to cover the hole left over from the old holding tank vent. I put enough on it so I can sand it down flush with the surrounding surface. Sometime in the future, I'm looking at repainting the blue stripe so this little patch will then be covered up. 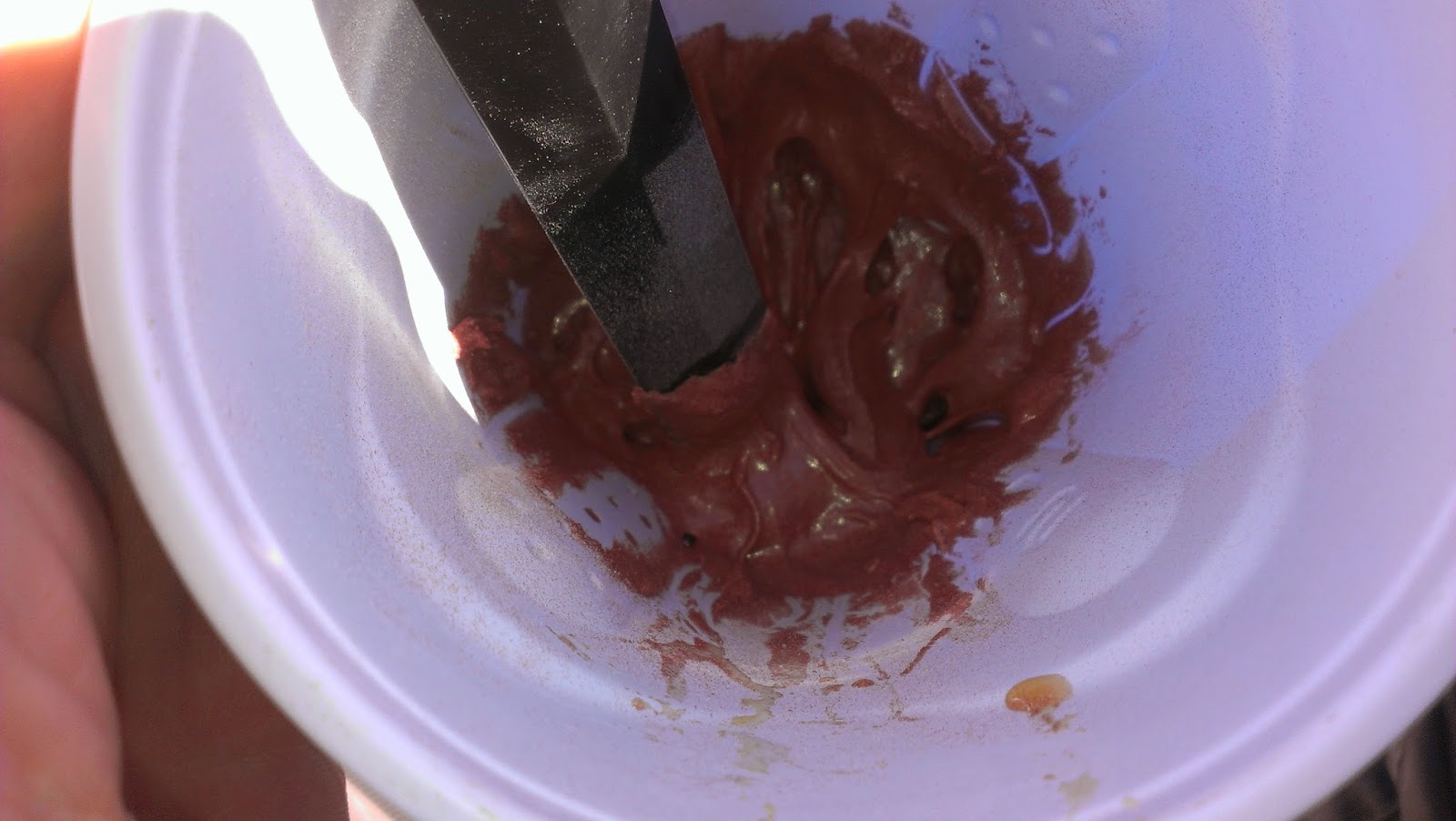 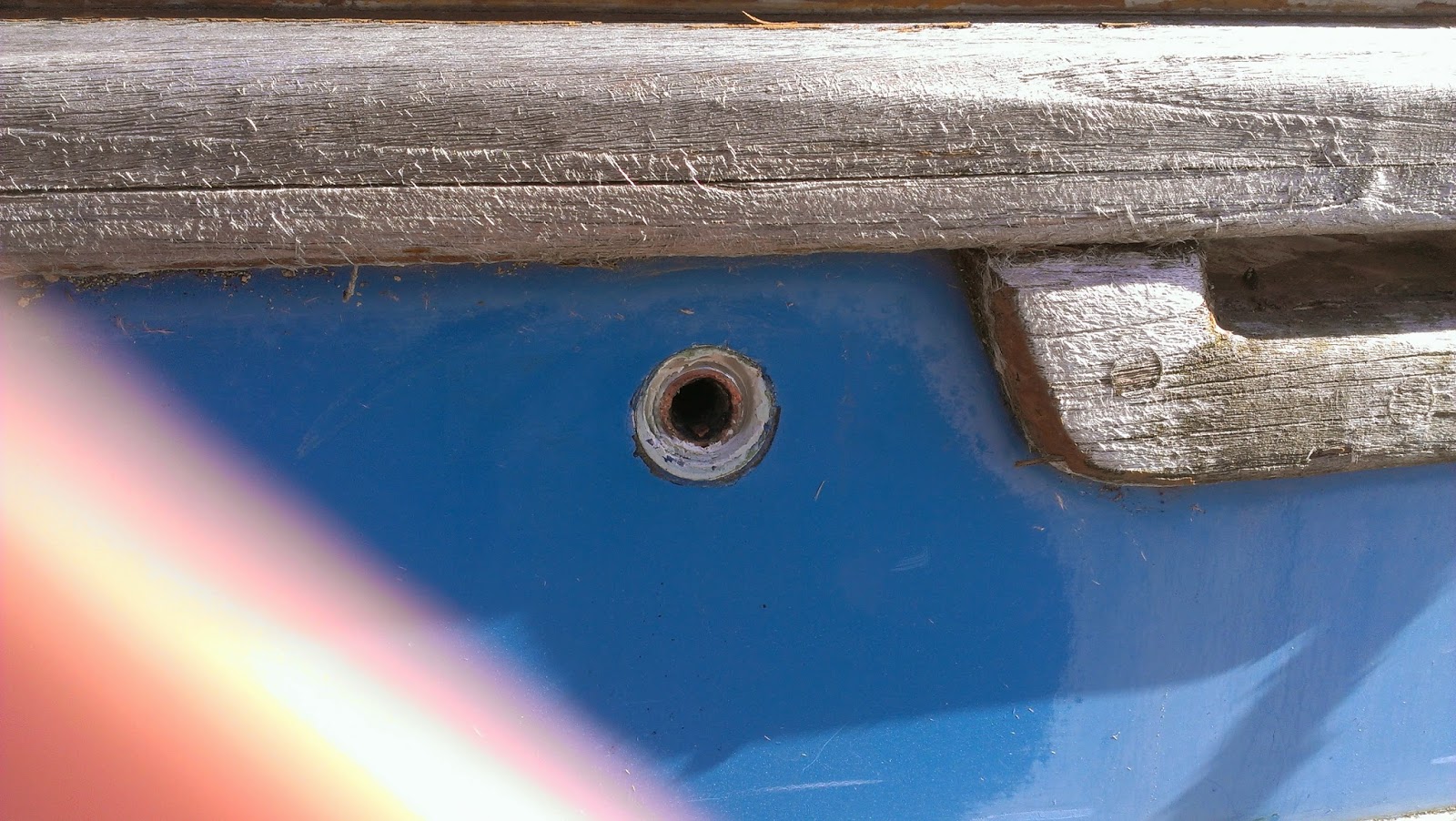 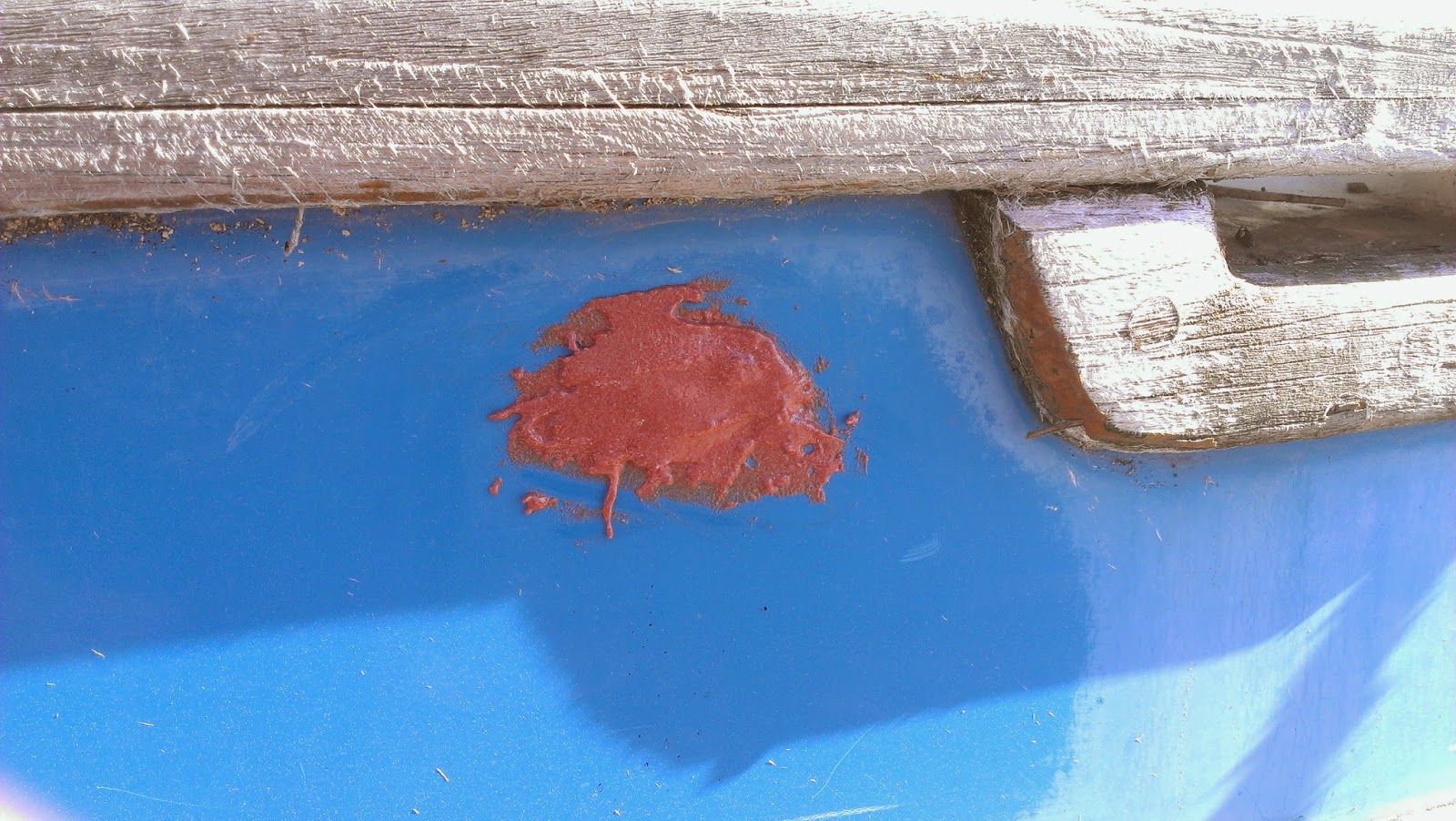 A week ago, there was a nice little weather system that went through the area dropping about 4 inches of ice and then a little snow on top of that. The last couple days, it was starting to warm up enough to melt the ice. Today turned out to be a very nice day with a high of 60F. A visit to the boat turned out well although there were always more to be done.

There was still ice on the dock and the boat. I had to use a boat hook to chip away at the ice on both to get rid of it. The cockpit had about 4-5 inches in areas that I broke up and threw into the lake. By the time I left, the ice on the dock was gone and there were still a little bit on the boat in the shaded parts. 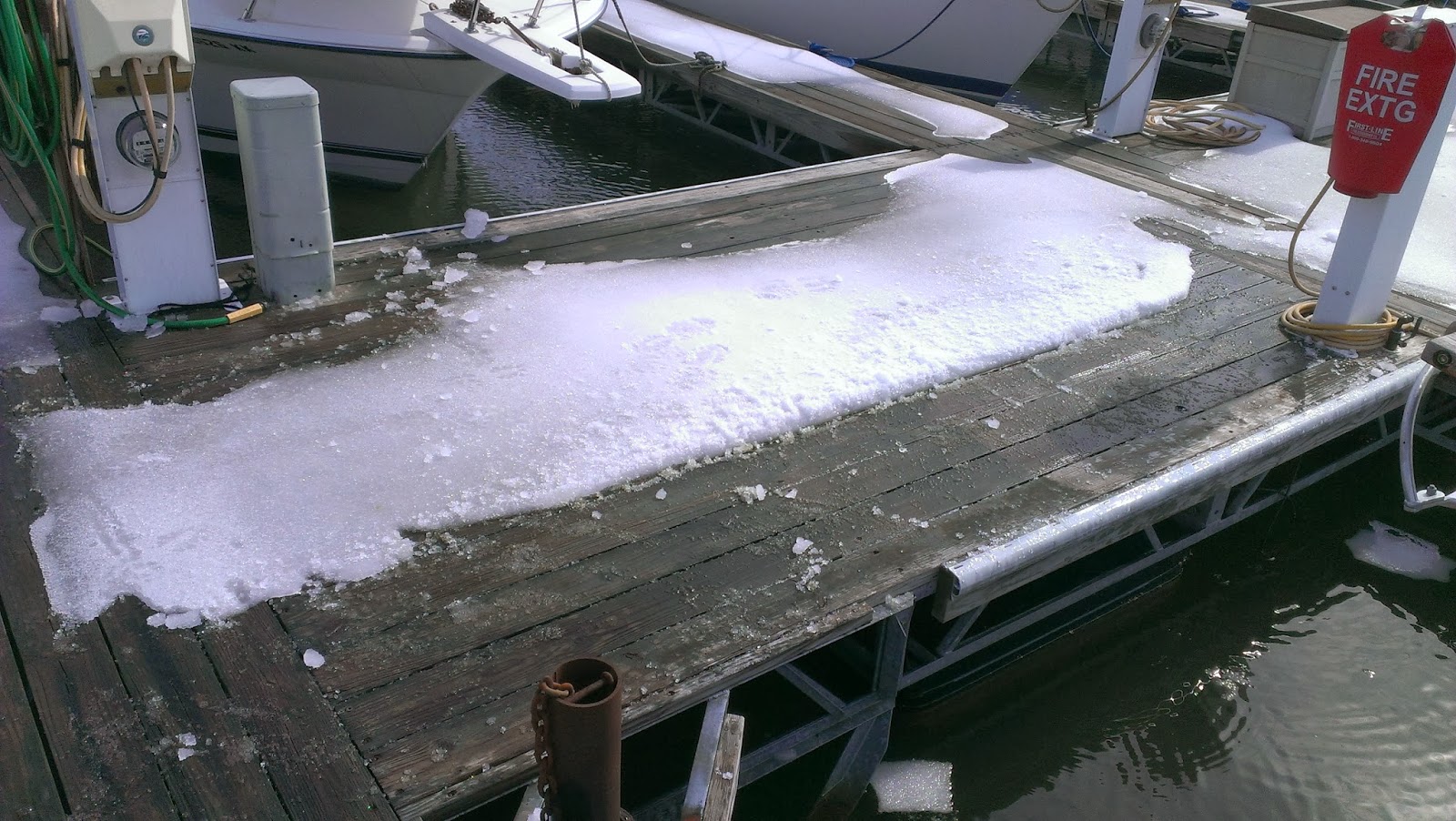 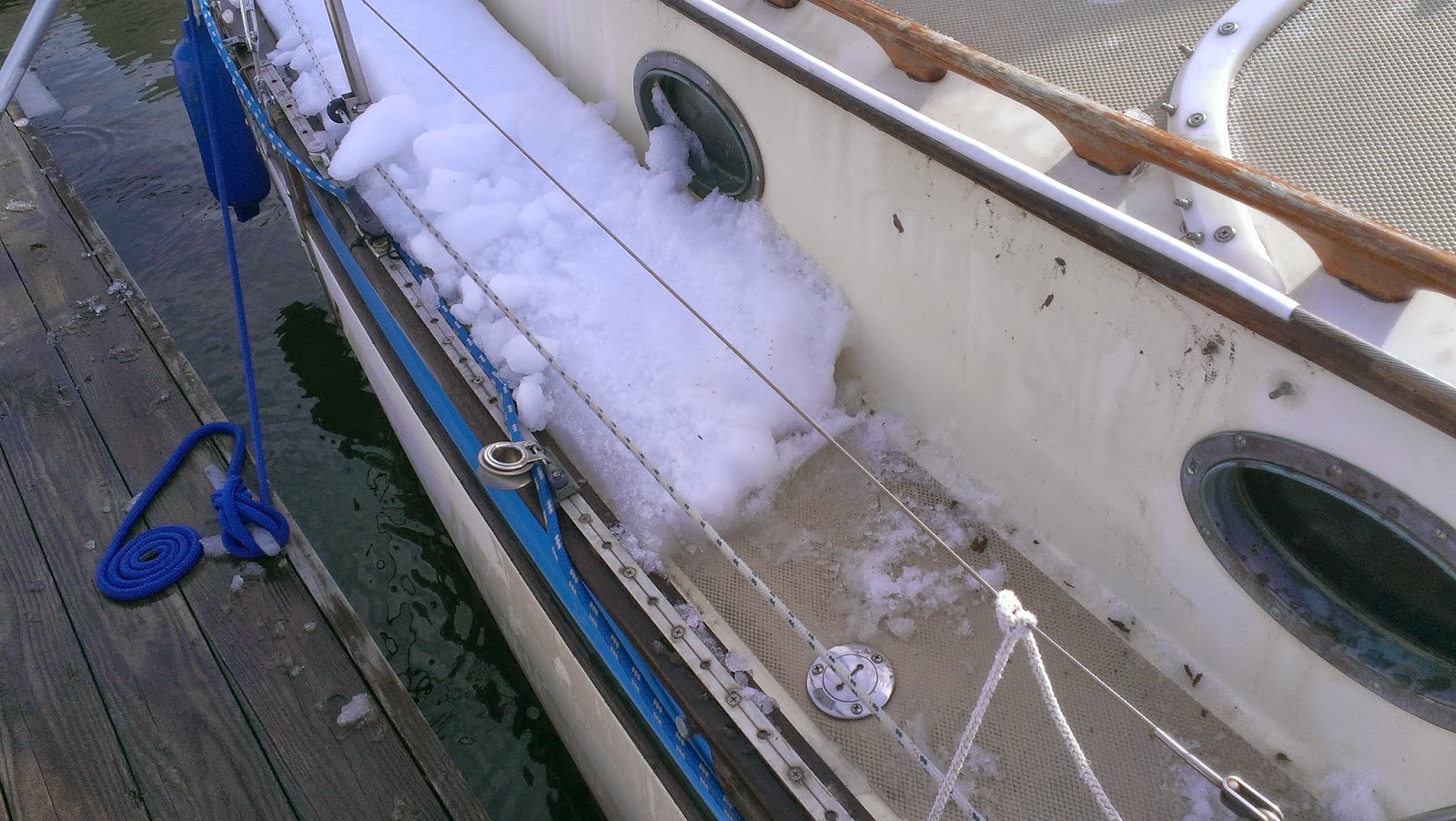 One thing I wanted to do was to measure the space on the deck in preparation for venting and getting ready for a new head whenever I'm able to get one. After clearing the ice on the deck, I was able to see the space I had to work with. 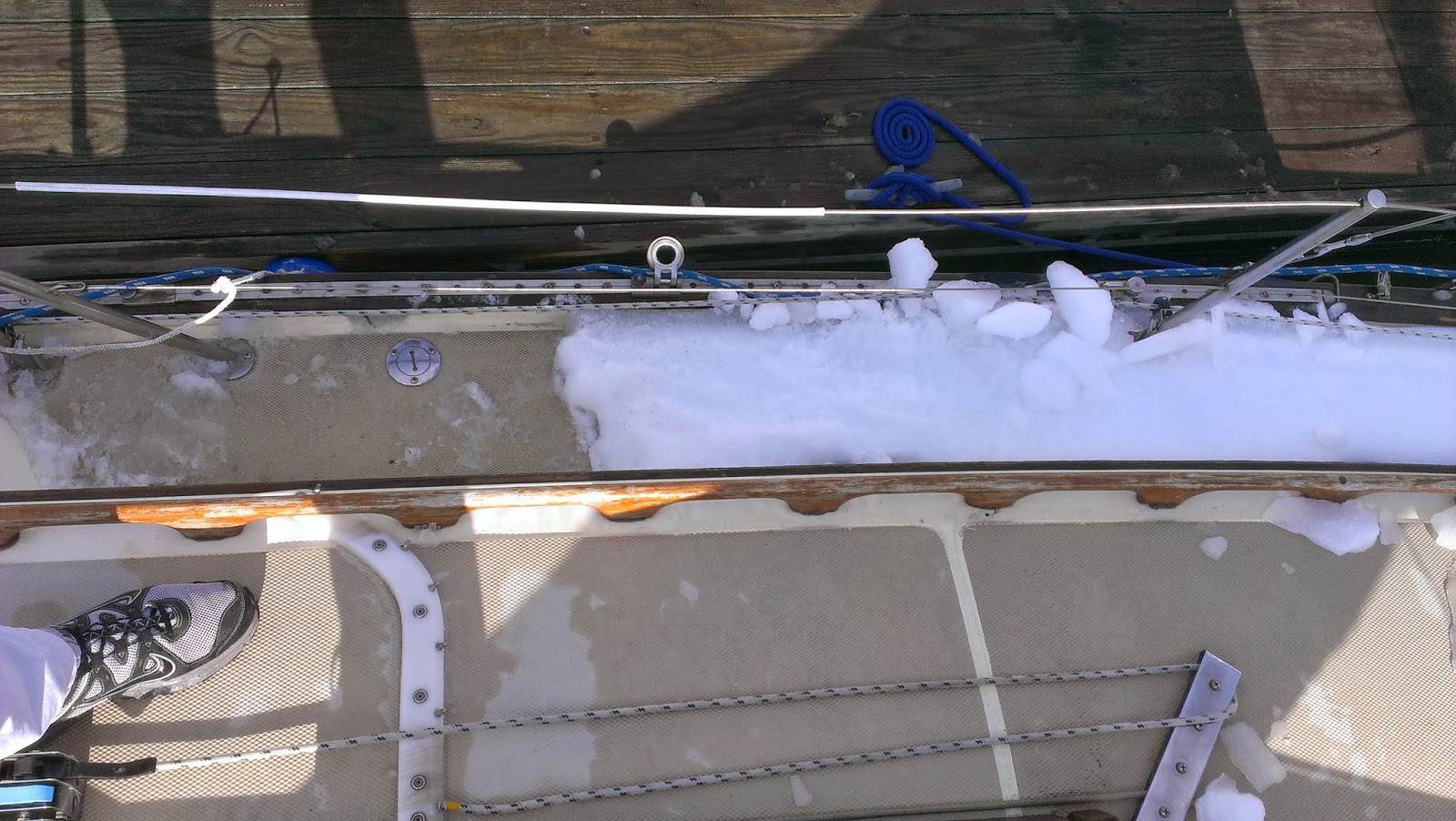 The space I have for vent placement is between the handrail and the line shown in the picture above. My original idea for venting was to use a solar vent in place of the waste deck plate. There are many boats that have these solar vents and a couple of them, I could hear the fans spinning as I walked the dock. One downside to these is the size of them. At 9" overall width, it seemed to take up a lot of space. After measuring the space I had, it would be too big anyway.
﻿﻿﻿
﻿

﻿﻿While talking with others about this idea, it was suggested that I use a dorade box with a cowl vent. I looked into these and getting the idea that this could work but started to think that maybe the size would be more than I would like. Here are examples of dorade boxes on other boats in my marina. 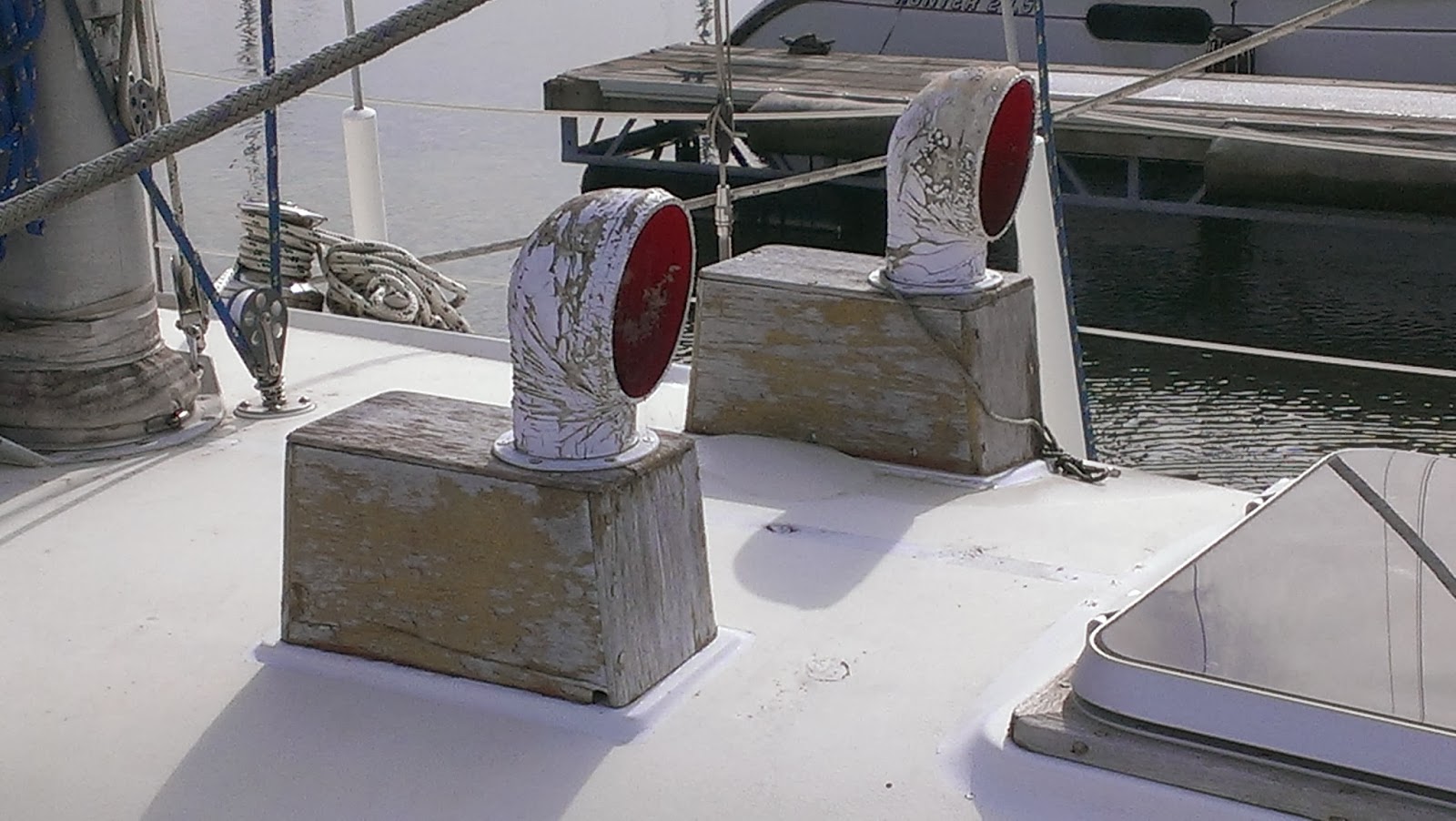 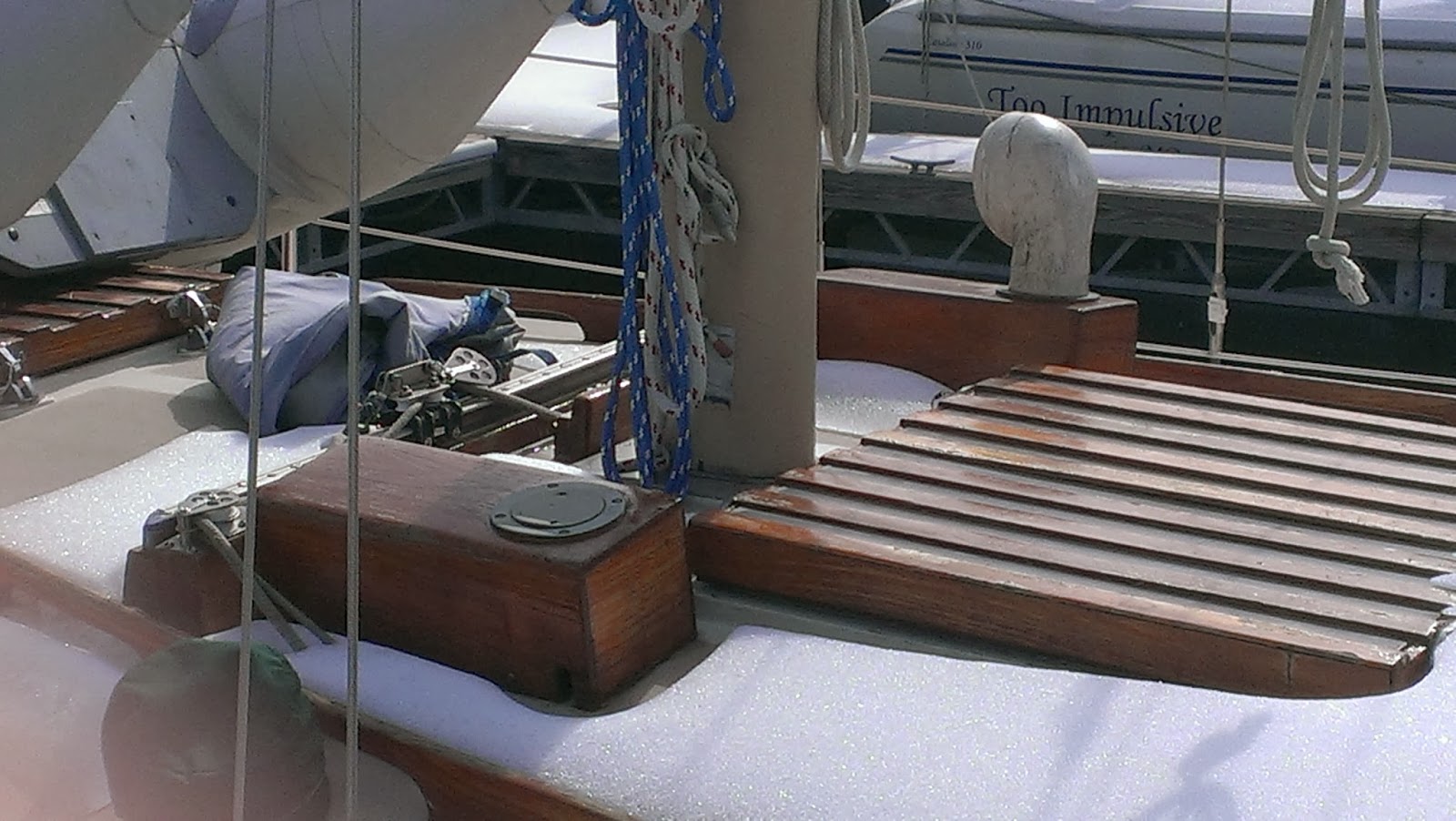 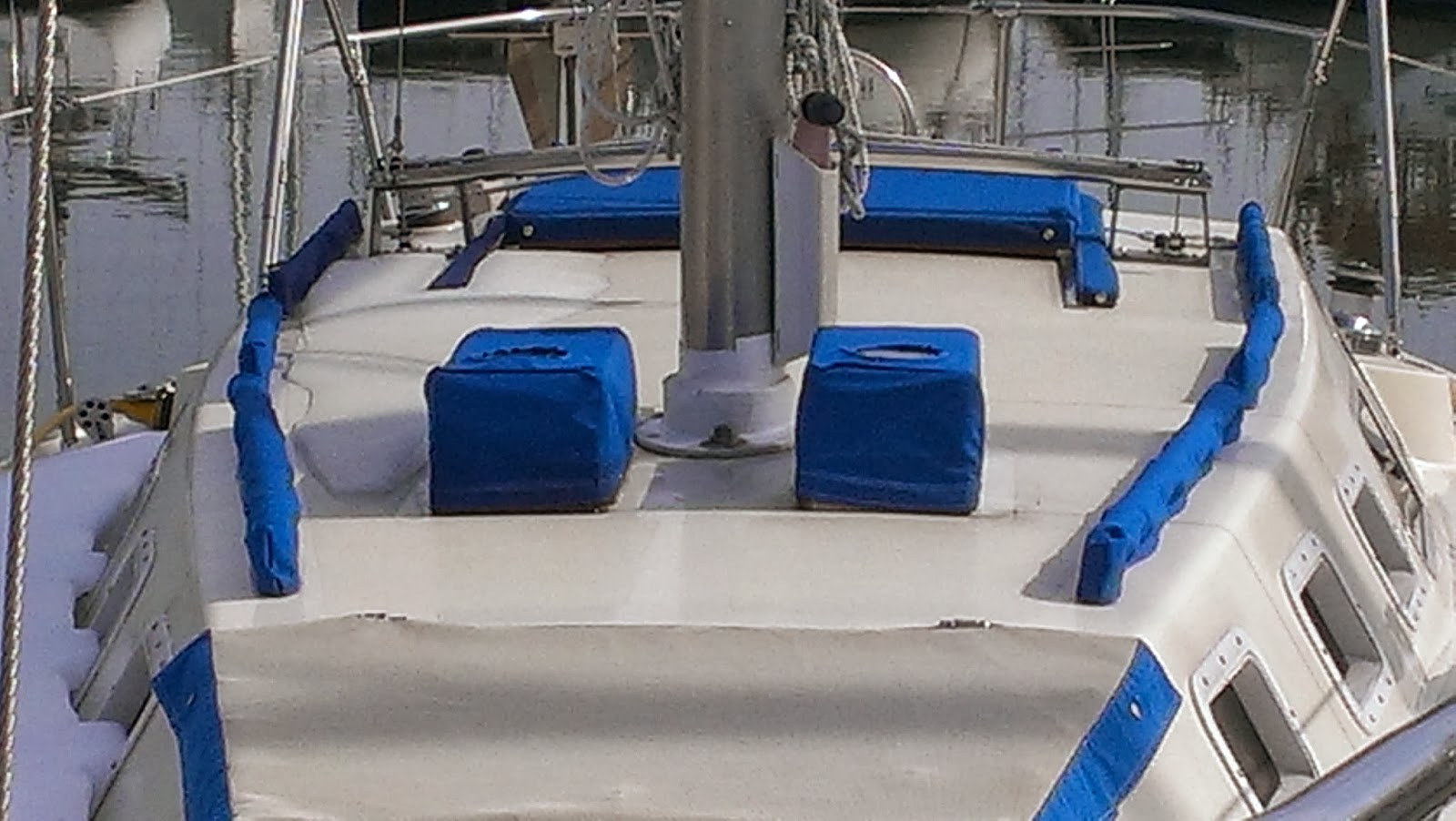 These dorade boxes allow air flow into the cabin of the boat while draining water back out through holes along the bottom edges. Instead of these large boxes, which would be near the cockpit, I decided to go with something a little lower profile that wouldn't stand so high by using a Vetus Mushroom vent along with a block of wood used to mount it on shaped to the curve of the deck. 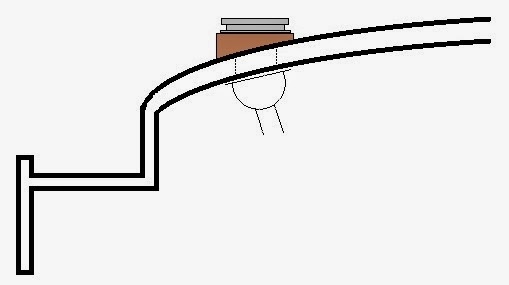 On the inside, placement would have to avoid the light on the ceiling, but also allow the placement of the hose that it's not in the way either. I'm not too crazy about drilling a large hole in the deck but I think it would be useful for venting. In this picture below, I'm looking at placement just off the third handrail bolt. 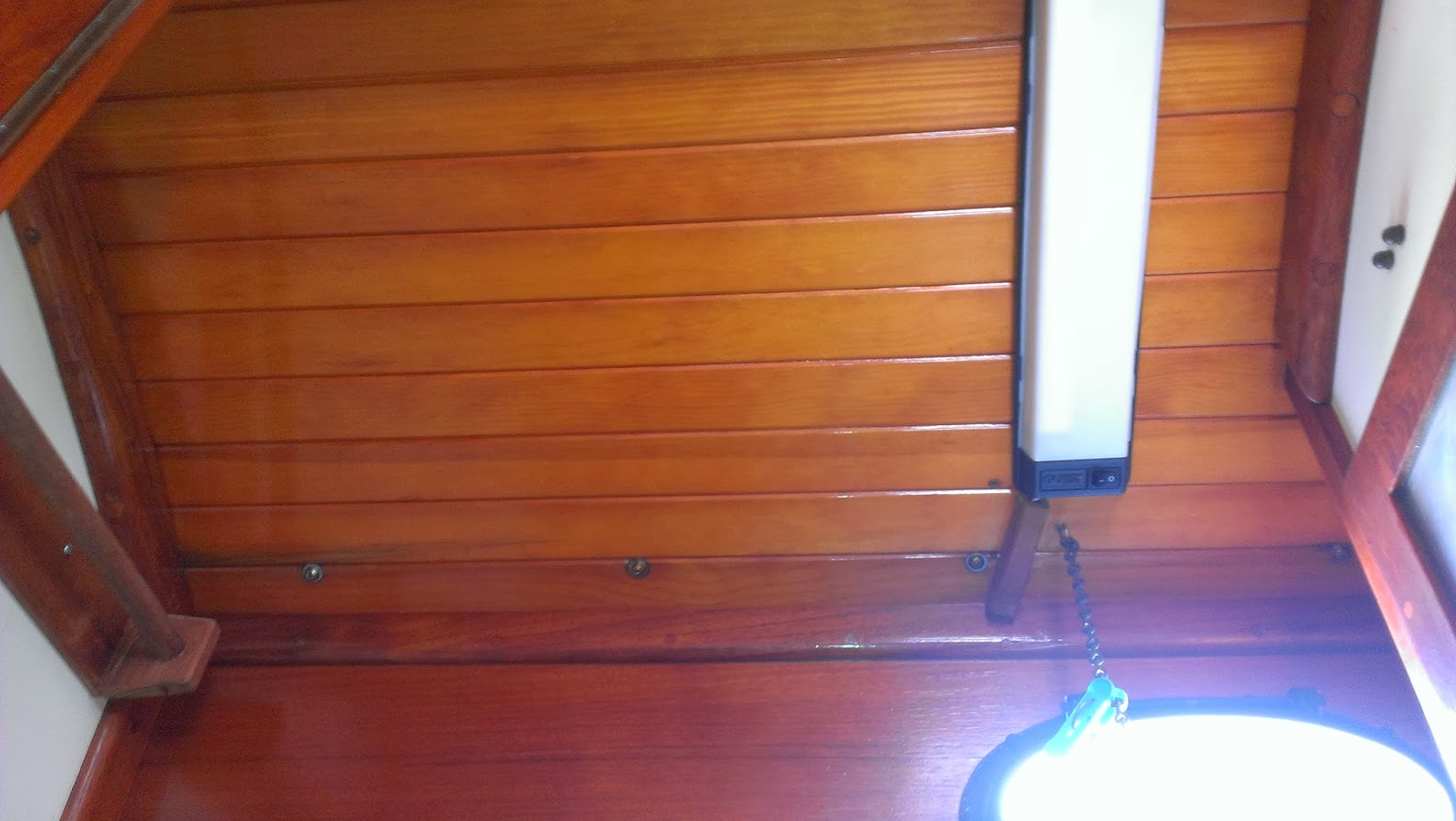 Routing the hose would keep it along the back wall toward the head. 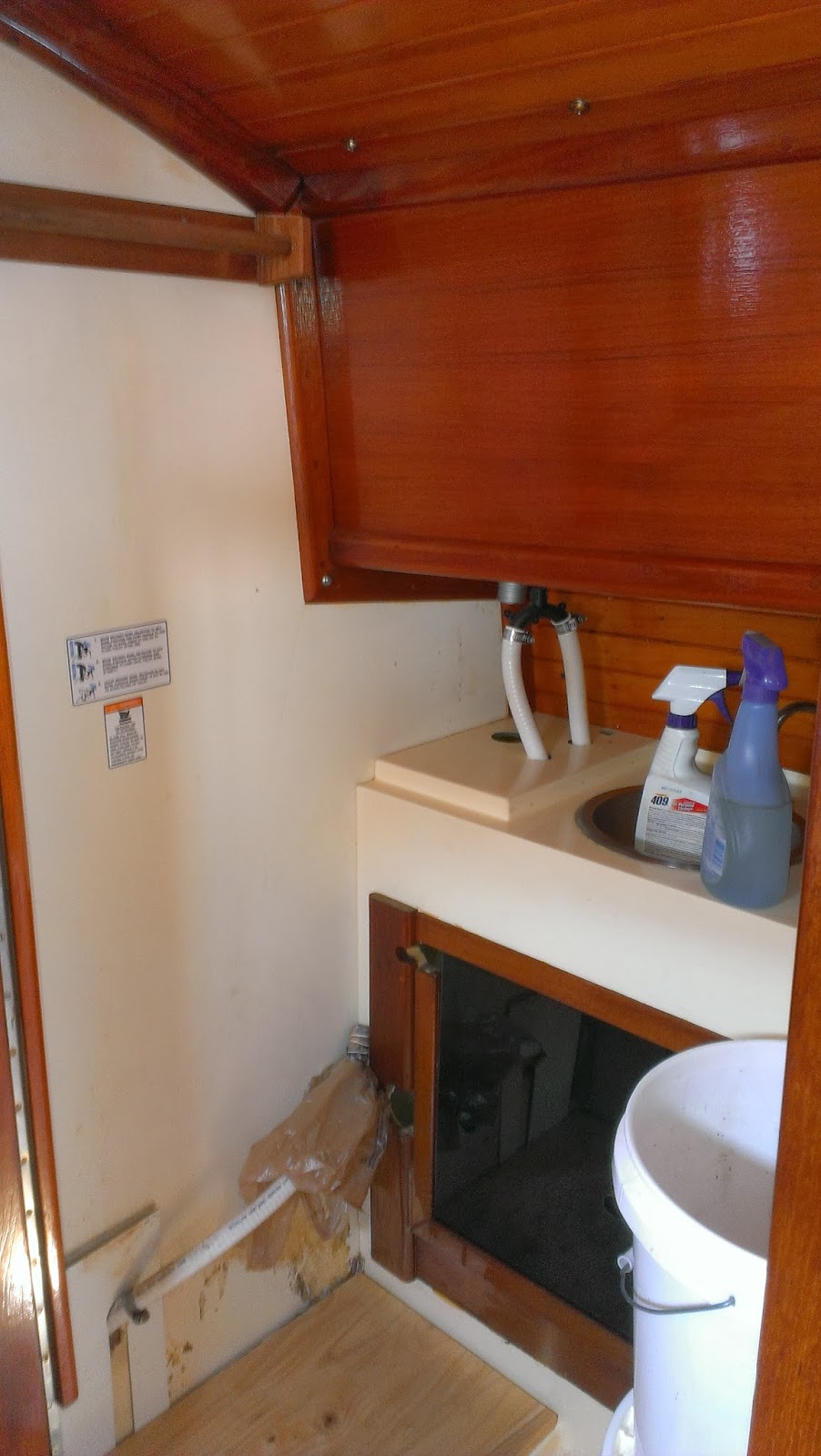 Since taking out the old head, I have been left with a hole from the holding tank. I recently got a board that is sold as a tool box cabinet top. I cut it to the size I needed and I thought it turned out pretty good. I have space where I could drill into the board and the mounting surface and bolt it down. I'm thinking I could use a caulk to seal it when it's bolted. I've also had the idea to paint it over, after sanding to rough it up a bit, with bilgekote to protect it too. 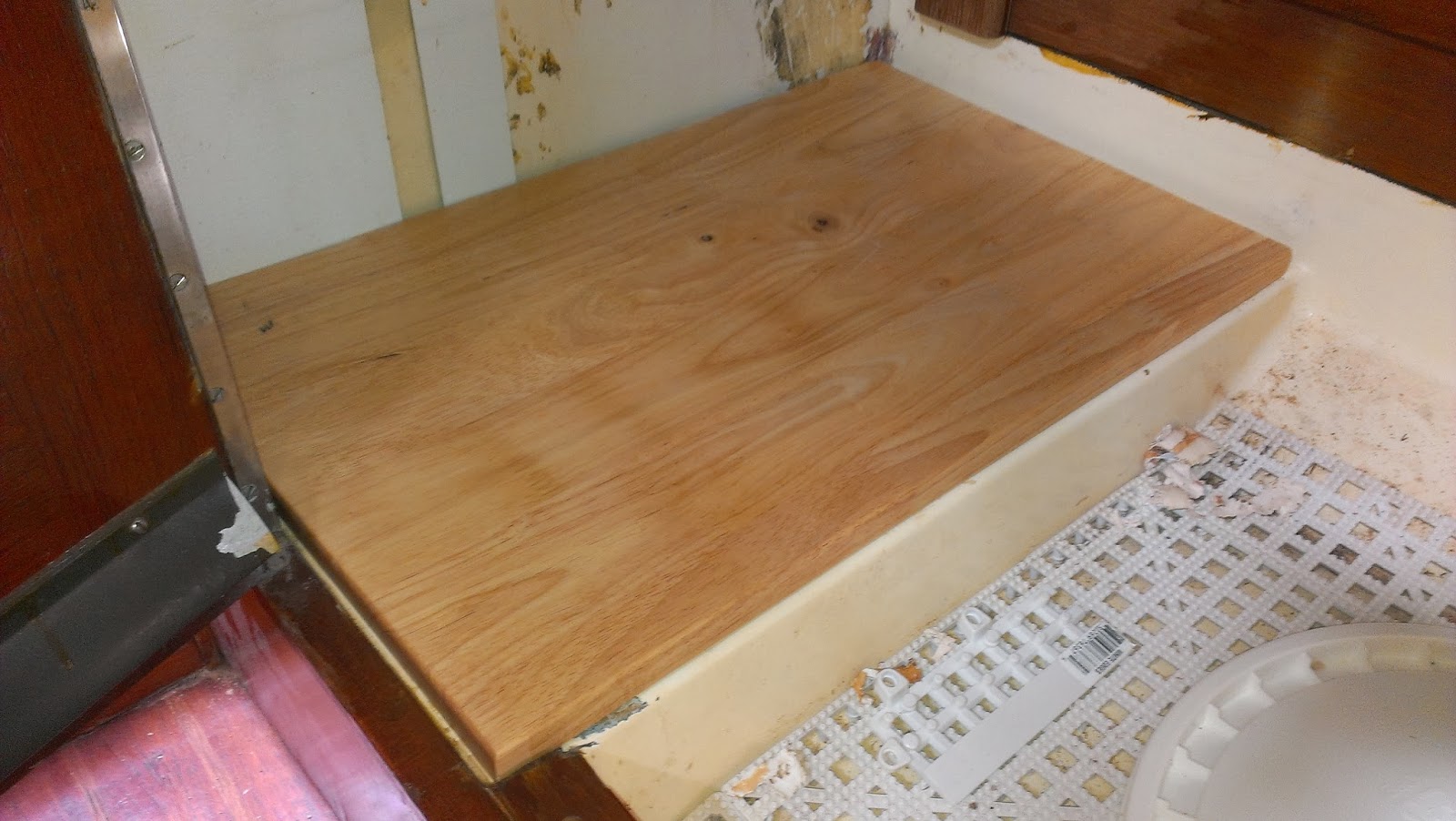 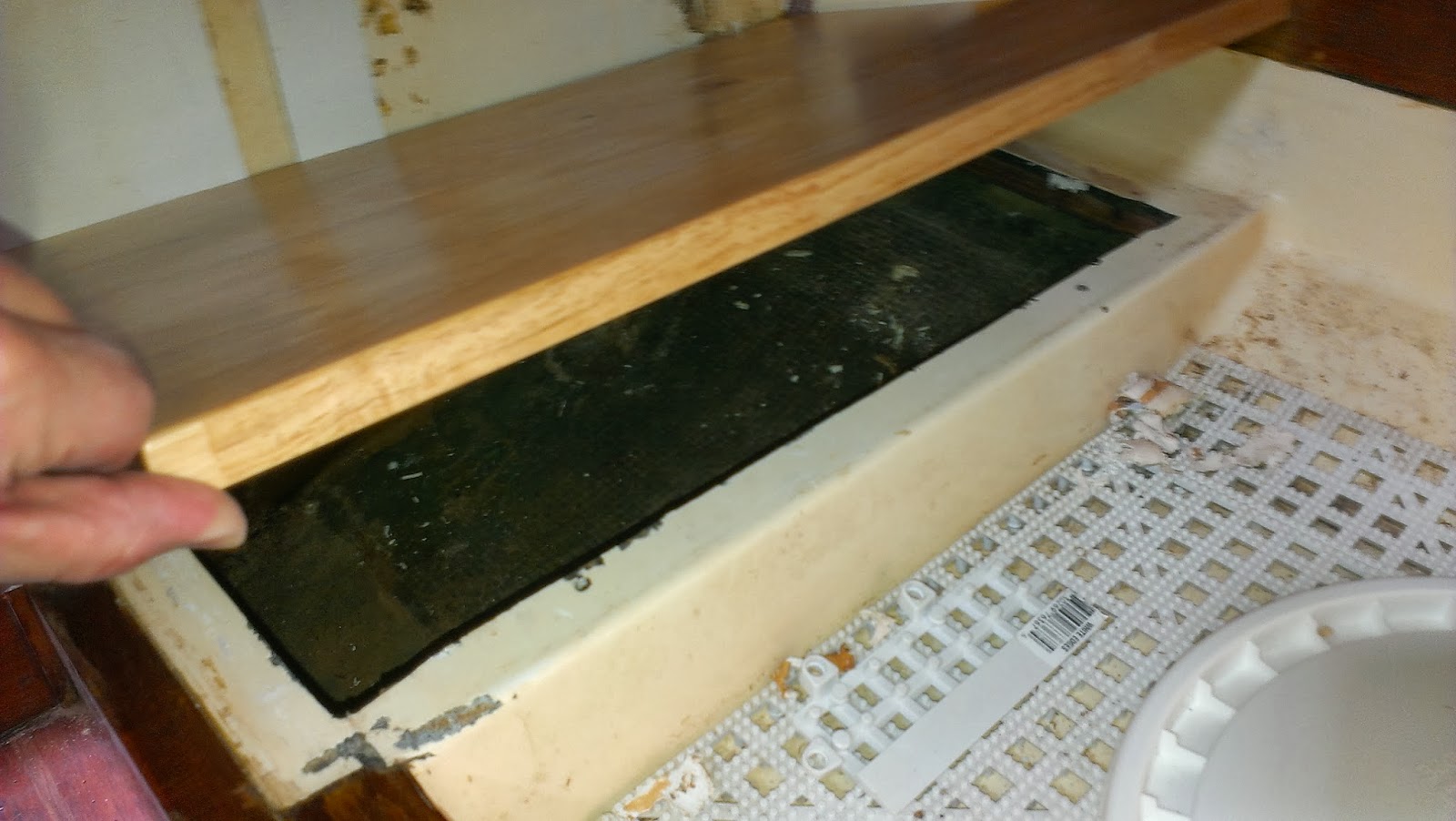 I also have a little bit of the cut off material that could be used for the back edge. I'll also have to clean the back wall and/or paint over it. 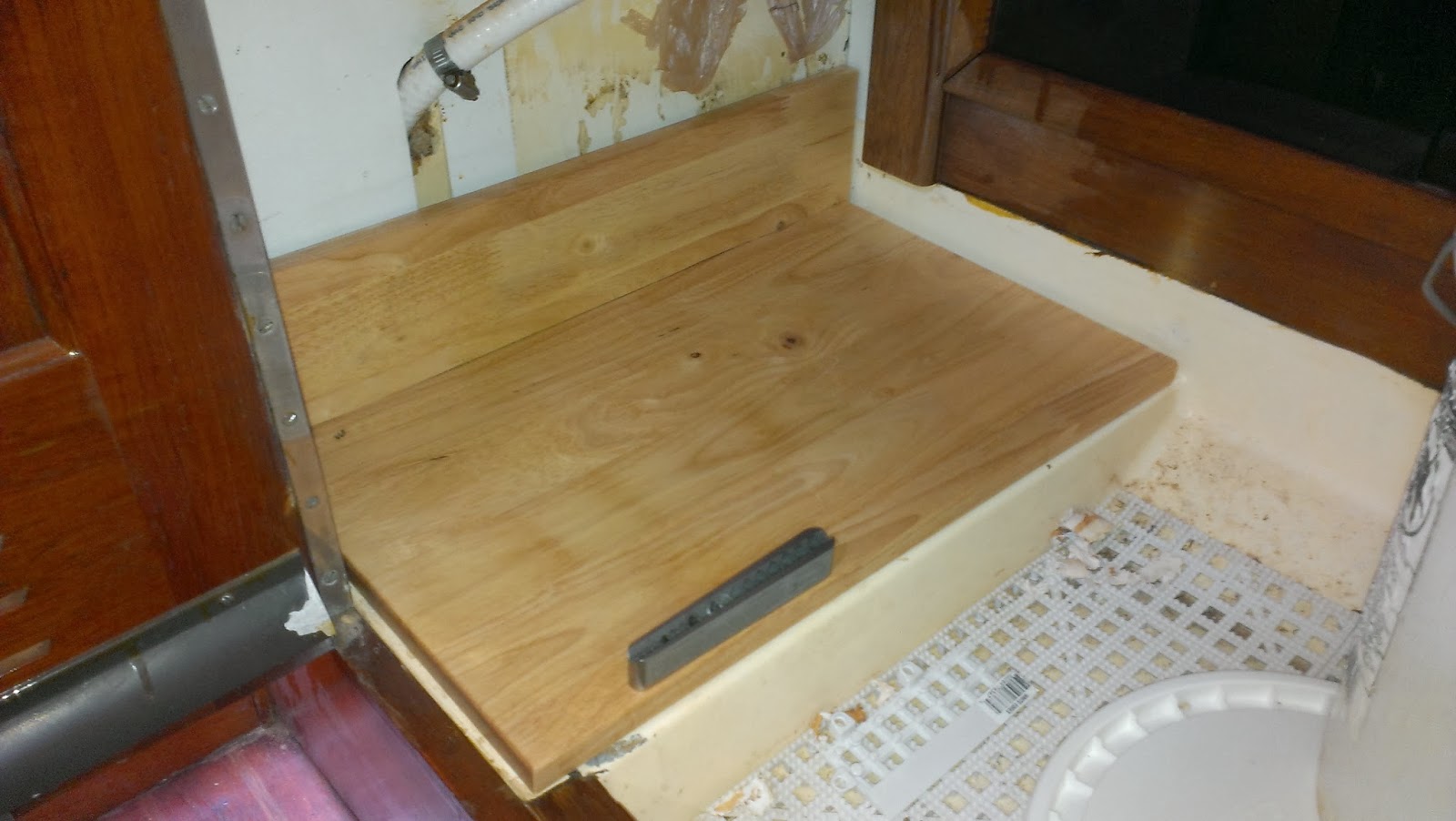 When I took the head hoses out, I broke part of a fitting that was used for venting of the holding tank. I wanted to remove it so I took a couple wall panels off and attempted to take it off but it didn't work out. I ended up breaking the exterior part of the vent off but nothing else would move. I didn't have the supplies with be, but I was going to mix up some epoxy and fill it in. Then, if/when I get to it, I was going to repaint the sheer stripe on each side. 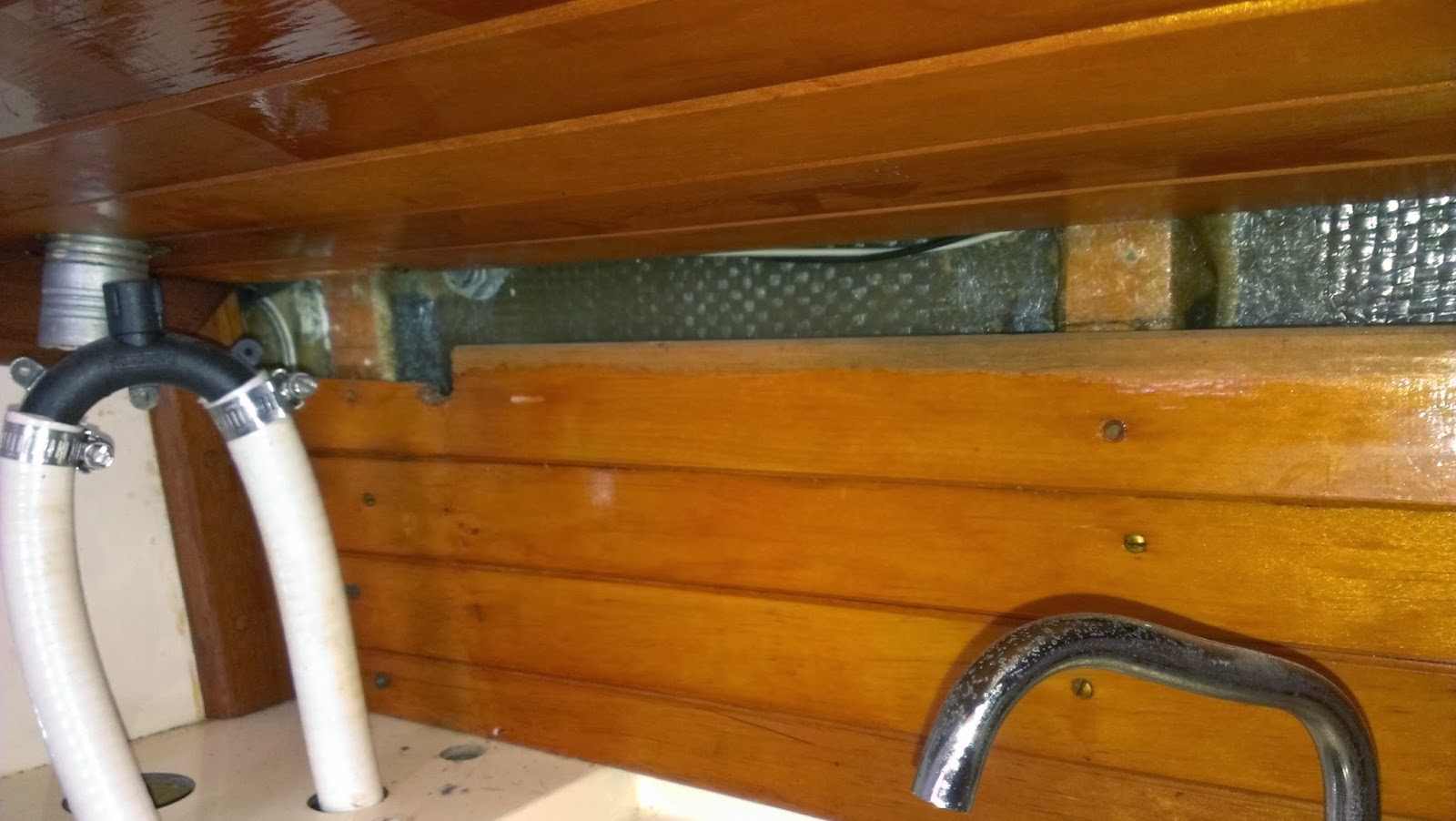 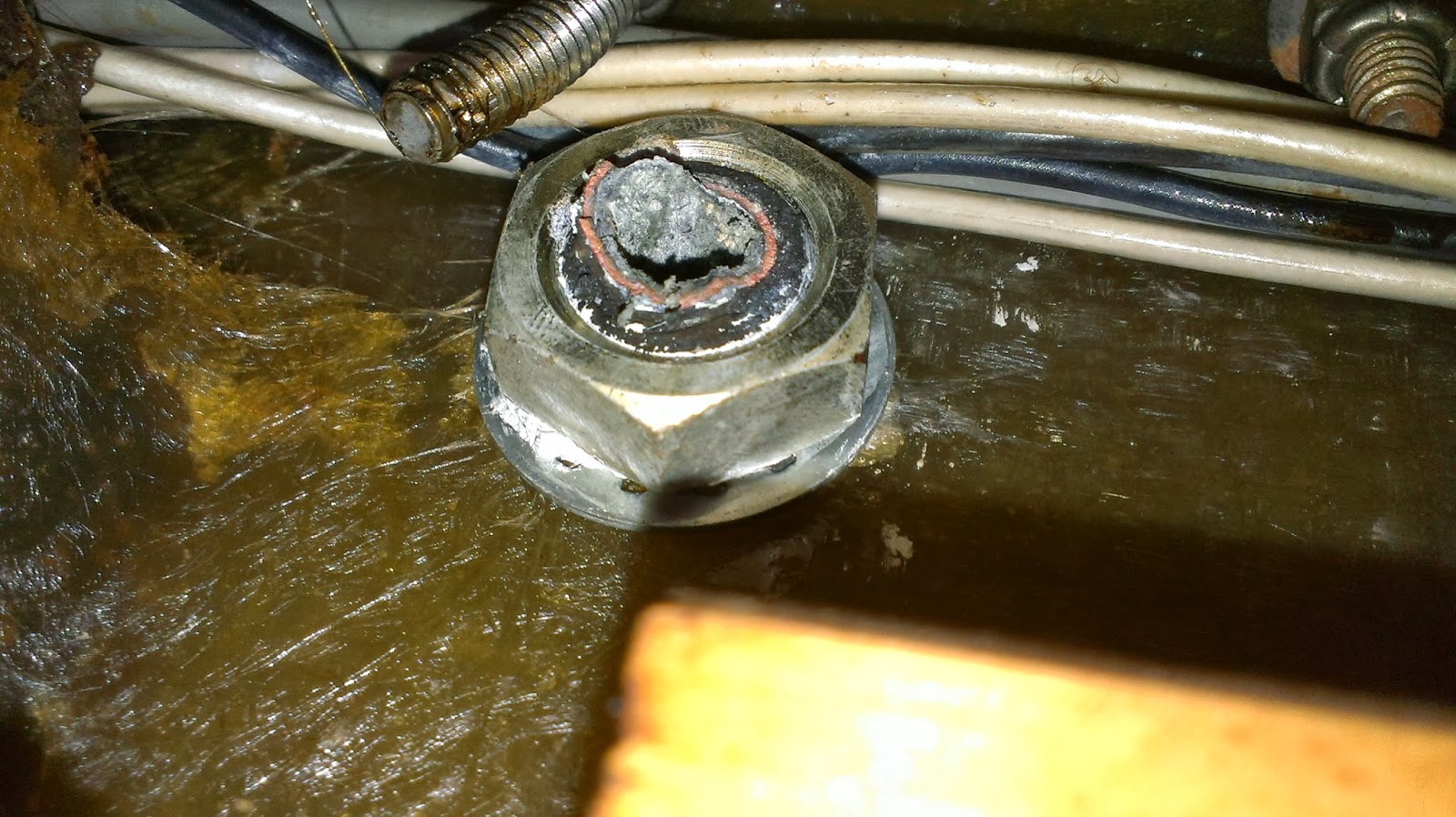 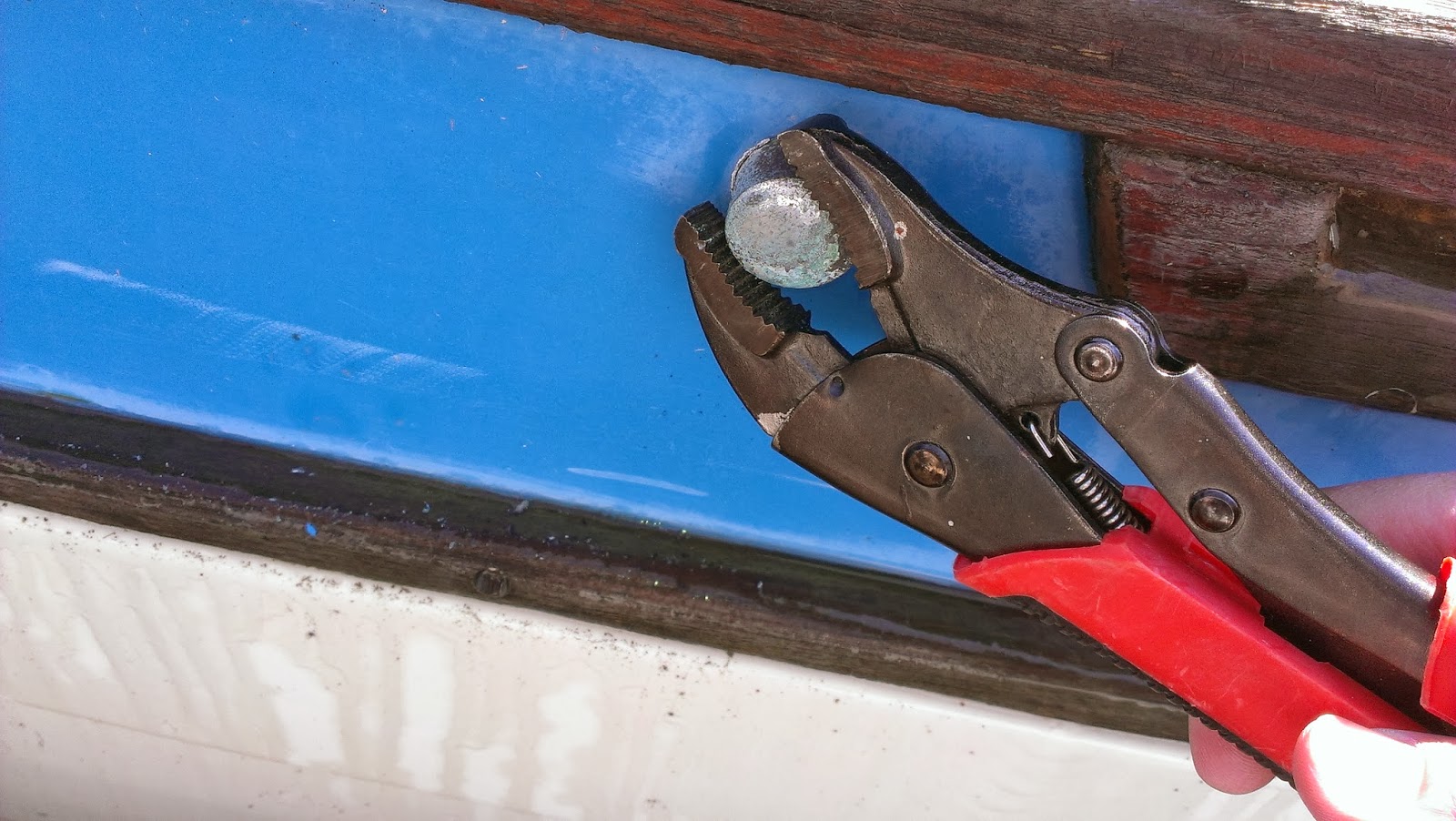 The panels didn't seem very easy to remove and I don't expect doing that again anytime soon, at least, not in the head.

Last thing I was going to do, but also didn't work out as planned, was to service the Racor 500's. There's two of them. The one on the port side didn't look too bad but it was the one I was going to do first. At first, the lid wouldn't come off but had to pop it off with a rubber mallet. Then, I was going to remove the little bolts holding the bowl in, then realized I didn't some tools that I don't currently have. So that project is on hold for now. The starboard side looks to have more debris so I hope to clean that one up soon too.

With that, there wasn't anything else I had plans to do so I packed up and went back home.

Overall, it was a nice day. There were other people at the marina getting their boats ready to sail. I also met a guy a couple docks down who said he was from Poland. His English wasn't too good so we didn't talk long. He was also busy breaking ice off the dock.

Spring will be here soon and it's about time!
Posted by Dan at 9:17 PM 2 comments: