There are two batteries on Rhapsody. Battery 1 is the house battery. It's used to power lights and electronics. Battery 2 is the starter battery which is used for starting the engine.


I knew the batteries were dead since none of the interior lighting would turn on. I just wasn't sure how dead they were. From what I've read, a 12 volt battery is considered dead if it falls below 10 or 11 volts. Using my volt meter, I checked the two batteries and found out they were significantly lower. One was .9 volts and the other 1.1 volts. I thought of using my truck to jump start but with how low the batteries were, I wasn't sure how safe it would be. Since one battery was covered with beeswax, I wrapped it up in a trash bag and turned it in at Wal-Mart for disposal.

The house battery is a Group 31. 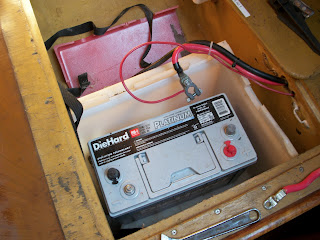 The starting battery I had to look up but seems to be a Group 24. I'm thinking to switch to Group 27. 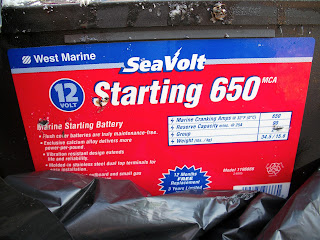