I decided to do a video this time showing my removal of the handrails.


One of the bolts I could not wedge the nut to loosen and I stripped the head trying to get it out. Now, it looks like I'm going to have to resort to drilling out the bolt or get a small fine tooth saw blade and cut the head off so I can remove the rail.

The rails I did get off are now at the house so I can refinish and prepare them for reattaching to the deck. So far, things seem to be going well. Just need to get that one bolt out so I can get to work on the other handrail.

Considering the bolts are phillips head, I'm now considering the possibility of changing them to a hex head. I wonder if that might make it easier for removal in the future, if it was needed. Either way, as long as things get bedded down good in the first place, it should be good as it is. If I'm going to drill out or cut the one bolt off, I'll need to find a replacement anyway for that one.
Posted by Dan at 7:09 PM No comments:

For the first time in a long time, I have a birthday on a day that I'm NOT working (as in, paid employment). Yep, today I'm 34.

It was a nice day today, and being a weekend, I decided to go do some work on the boat.

I've been looking at the teak handrails for a while and doing a little work to rebed them to prevent additional damage to the interior. I guess you could say that today I had a crazy moment and decided to ruin the nice handrails down below, gut out the plugs and unscrew everything so I could get to the bolts holding down the handrails on the top.

Here is the nicely finished plug down below. 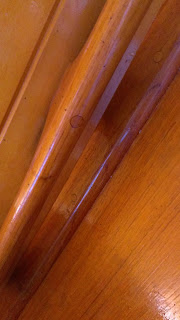 And here's how it looked after I took one of them out. 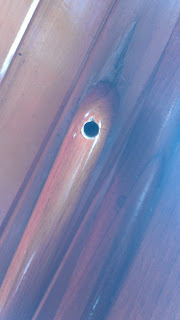 Everything was going pretty well. Still, it wasn't easy. My hand are hurting from trying to chisle everything out with screw drivers without causing too much damage during the removal.

One of the plugs on top had to be removed in order to stop a nut from spinning with the bolt. 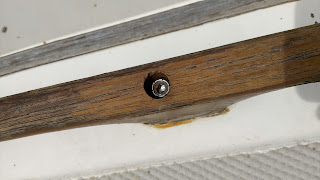 I ended up having to use a painters spatula to wedge it to keep it from moving. At the same time, I was reaching in from below through a port hole to unscrew it. 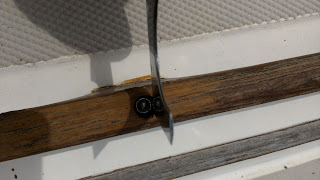 Here's the handrail sitting in the cockpit. 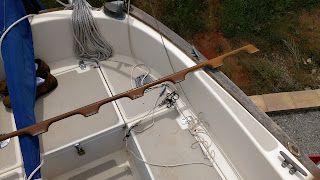 It'll take some cleaning up to do before I put the handrails back on. These, I can bring back to the house to pull the old varnish off without having to go out to the storage place to work on it at the boat.. 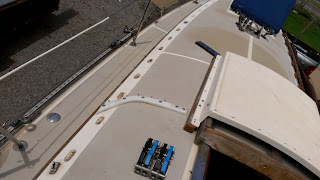 Unfortunately, The handrail on the other side was not as cooperative. There were three small handrails down below that I had to chisle out the plugs to get to the screws. Even then, When I worked on the bolts to detach everything, I have one that is spinning freely like the one I mentioned above and three of them are pretty tight and don't want to move and will require a bit more work to get it off. Since I wasn't feeling up to staying at the boat any longer, I thought it best to try again another time, probably next week. All together, I probably spent about 5 hours on all this today. It is not easy work cleaning the plugs out of the handrails.

Another reason I decided to do all this is so I can rebed everything rather than focusing on just where I see damage. This seems to be the first time they will be rebedded in 30 years or so. Then, I have to decide, do I use Butyl tape or Lifecaulk to rebed everything, as this is what I have on hand. Or, as others on the Nor'sea owners group seem to love, Dolphinite, which I also have on hand. I'm not sure of Dolphinite as it seems to have a more fluid consistancy that I expected. I first thought it would be similar to the butyl putty feel to it.

Time to consult the group. Thanks for visiting.
Posted by Dan at 7:19 PM 1 comment:

I went to the boat today to drop off stuff I had laying around the house.

Since one of the things I was looking at doing involved the compass, I took a picture of it. The lens has a bit of a haze but looking at it again, it might be the liquid(?), I don't know. It can still be usable as is. 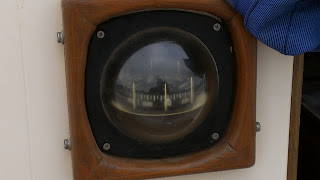 As with my other posts regarding the varnish work and the handrails on top needing rebedded, I took pictures of all the spots showing water damage. While a couple spots is only a screw head, there are other spots that are by interior handrails. I'd hate to ruin the varnish work of the interior handrails but I think I'd have to get to them anyway so I can loosen up all the rails so I can rebed the top side rails for better protection against additional water damage. 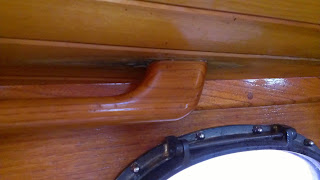 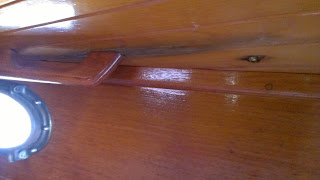 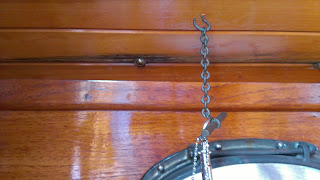 Today was a pretty good day. I drove up a little over an hour to Grand Rivers, KY and talked with a nice lady, Carol at Green Turtle Bay Marina. I talked with her about getting a slip for Rhapsody. I made reservations to start Oct 1st. I also talked with a guy, Gary, at the local boat yard about getting bottom paint. They can also setup the mast and move Rhapsody to the slip once it's ready too. Now, I actually have a date that's a little closer to getting into the water.

I think I'll have a day off that weekend of Oct 1st that I'll be able to move the boat up. I was told they would take it off of the trailer and put up on blocks to do the work. Gary said the job isn't very big for them so it shouldn't take too long to do. He also said he can order some handles for the seacocks since a few of them have gone soft.

In the meantime, Carol said she will work up a contract, mail it to me to sign and return in the next couple weeks.

I'm really looking forward to getting on the water. Even though today is cloudy, it's still a nice cool day in the low 70's. It's a nice and quiet place to relax. I'm sure Rhapsody will do well there.

Here's a video of the marina. The pier I was standing near is where I made the reservations and on the resorts map found here, it is labled "Jetty 3".