Cleaning up after the bees wasn't too bad. I ended using hot soapy water and a kitchen sponge with a green scrubber. I did most of the inside yesterday and today I did the last little bit including the battery compartment the bees used to setup their honeycomb. The battery itself was dead so I took that to a local Walmart to dispose of.


Here's what the battery box looked like when I got started. 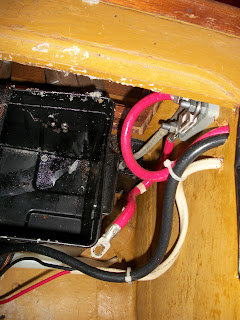 Instead of trying to clean around the battery box, I just unscrewed it and took it out altogether. Probably good that I did since cleanup went quicker and there were more bees under the box.

This is what it looked like after the box was removed. 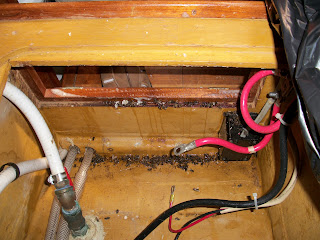 And the box itself. 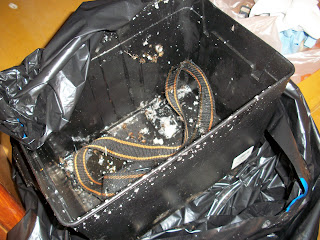 Here's another view of the battery compartment, also showing part of the floor next to the steps. 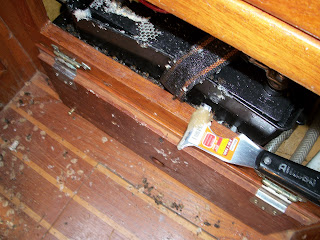 ﻿
I didn't throw out the box (yet). I was thinking I might keep it. I just brought it home so I don't have to try cleaning it while on the boat. I thought it would be easier to clean with hot water being readily available instead of hauling buckets to the boat.

After a lot of scraping and scrubbing the space, it turned out pretty nice. 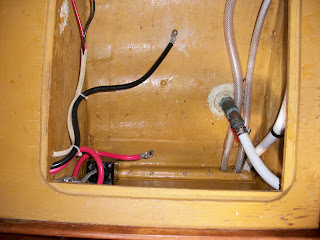 Here's a view of the floor next to the steps. 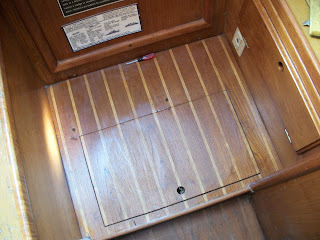 ﻿
After cleaning this area, I cleaned off the wax off the portholes. Now it's possible to see out the windows. I also cleaned a few areas with water that had some bleach in a spray bottle. Overall, I think it was a productive day.
Posted by Dan at 8:12 PM