Since I'm working below the cockpit, I wanted to remove the hoses and thru-hulls, that will be replaced anyway, so I can work on removing the fuel tank. To keep water from getting into the boat through the cockpit drains, I needed a frame and cover in the cockpit. Got some 2x4's and made a simple frame and a 12x20ft tarp. The tarp I got wasn't quite big enough, so I had to go to the local hardware store for another. Took a while to setup. Once I started putting the tarp on the frame, the wind started picking up and wanted to blow the tarp all over the place. The sides extend just below the cockpit and there's a small opening by the stern rail, but shouldn't let much, if any, rain in. 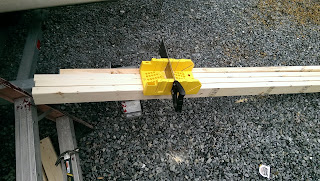 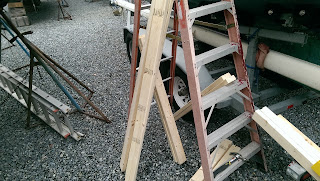 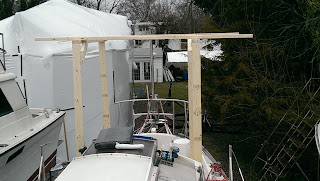 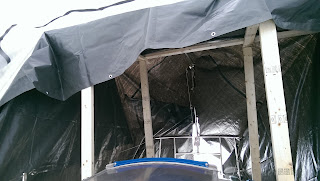 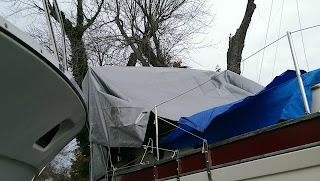 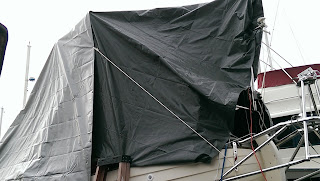 The cover isn't pretty, but hopefully it'll work long enough to do what I need to.

Didn't have a lot of time for the day but with an angle grinder I got from Harbor Freight, I started making a couple cuts into the tank. The first cuts went well, but didn't come off the tank due to the baffle in the middle of it. I made another cut behind it and came off well. Looking at the piece I remove, it appears to be 1/16" thick. I'll try measuring it next visit. From what I've seen online, a lot of tanks are made with thicker aluminum. So long as the cover works well, the tank, hoses, thru-hulls will be removed soon to make space for the next tank. 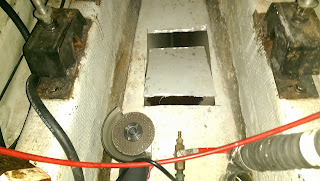 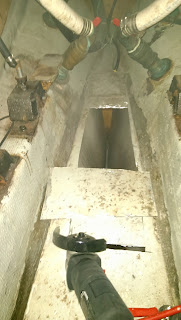 This isn't the easiest work and not a lot of space to work in, but it should work out all the same.
Posted by Dan at 11:50 AM 6 comments:

Here's a video showing where I am with this project. A LOT of cutting involved and I really hate the foam used to hold the fuel tank in place. Still plenty of work ahead of me but here's the progress I made the last couple of days. This will give anyone an idea of what's involved to replace the tank on one of these boats. Towards the end, the video ended up being shot upside down, but doesn't really mess up what's being shown.


Just to show that I haven't given up on the engine at this time. More cleaning up needed. Instead of a bunch of smaller blog posts, I wanted to do one big one for this project, that is still on-going. So here's a video showing a bit of what I've been doing. I've completed the head but didn't show that as I wanted to wait until the main post with the completed engine, and hopefully running too.