I ran the engine today for the first time since the test start I did immediately after the rebuild. Started right up and I let it run about 15-20 minutes. Out of curiosity, I decided to try out the hand crank since the engine was well warmed up. Started up pretty quickly, but I think it's only because it was warm. I'd hate to see how it would go if the engine was cold.

It's quite a work out trying to start it manually. I had to take breaks between attempts.

After several failed attempts, I was able to start it a second time, and more attempts after. Like I said, it's a work out. Heart beat pretty hard while cranking this engine.

But, I got it working. I was able to get the third start on camera.

Took some time off from work to catch up on some boat projects. Today I decided to take a break from the boat work and borrowed a kayak the marina has and went paddling down the fairway. It was bright, sunny, and windy. Great day to be on the water. I enjoyed myself. Even found a fender washed up on some rocks. 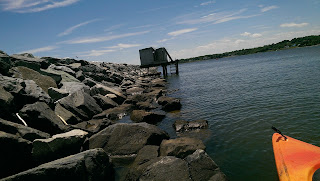 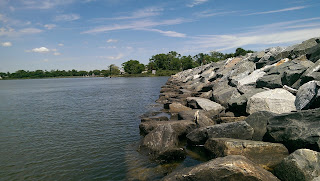 I tend to chat with other sailors on IRC online. I noticed something on my mast and figured I would share a picture of what was obviously wrong. I didn't notice it before because the mast has been under the boat, just inside the vertical supports holding the boat up and this issue was on the inside. Apparently, the marina in Kentucky put the standing rigging on the wrong side of the tang. 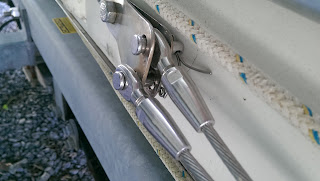 Well, one of the regular chatters noticed other things. One I had an idea about but another I wasn't really aware of. The part I had noticed was the clevis pins being a bit too long. The part that was mentioned to me is that the clevis pins are also too narrow, leaving a gap in the tangs. With the length and size of the clevis pins, I'm being told that it could wear everything out faster, even causing the holes to become elongated and/or bending the clevis pins. Either of which isn't good. So, I went back to the mast and took these other pictures to get a better view of the pins. 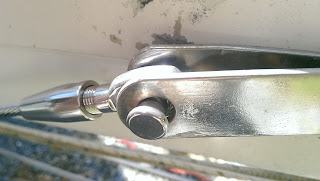 As I look closer at the mast and think about other projects while taking a break from the current project (fuel tank related), I look at the electrical connectors that run the lighting and feel that these should be replaced as well before using the mast again. I'm on the hunt for connectors that could be used. At the same time, I'm looking to replace the RF cable running up the mast. It's RG-8X and probably 35 years old as well. I'm looking at using two types of RF cable for my refit. Since the RG-8X is a narrow cable, I'll probably stick with something just as narrow. I'm now looking at LMR-240 Ultraflex to run up the mast since it'll still be fairly lightweight. From the mast step and down into the boat, the cable is thicker and since I'm rerouting the RF Cable inside the boat, I'm going to go with LMR-400 Ultraflex. All of this together will give me a much lower signal loss than whats here now getting more power out to the antenna. Being a ham radio operator for the past 20yrs, I should know how to improve the RF system. But doesn't hurt to see what others say. :-)


Plenty of other work to take care of in the meantime. But this is something I'm looking/planning.

It's Getting Hot in Here

Getting hot on the boat lately. The work I'm doing on the boat now requires a tyvek suit which is making it feel hotter. Decided to install an air conditioner in the forward hatch to cool things down. After a day of using it, I'd have to say that it's better than nothing. While it's only marginally cooler, it does help make it more bearable inside.

Looking at using this only as my refit continues during the summer. 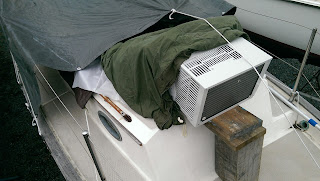 I may not have posted in a while, but believe me, I've been BUSY. Not going to go too far into it, but the current work on Rhapsody involves fiberglass and requires me having to wear this: 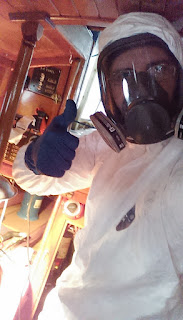 Now, it's warming up a lot lately. I put a small thermometer on the boat to see how warm it gets. The last couple visits have seen 84F/29C inside. Wearing that Tyvek suit and full face mask, and not having much of a breeze through the boat, it gets toasty. While I'd like to keep the boat from having too much "stuff" on board, I'm thinking an AC unit will be very handy. It's a consideration at least, to make it more comfortable while I continue my work on the boat.


By the way, things are a bit disorganized, but for good reason... Isn't that supposed to happen during a refit anyway? 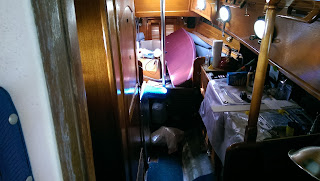 I haven't used the dodger that came with the boat (yet). When I was looking at the frame and the spare hardware left by the previous owner, I didn't see anything that could be used to mount anything. So I took a piece of the frame that bolts together and the picture below, and went to West Marine to find the right size I needed. Got the sizes sorted out for what I needed and hope to put it all to use as the boat gets closer to splashing... (don't ask when, I don't know yet). 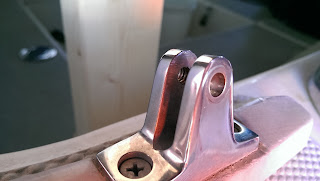 Sometimes, it helps to take a break on the foredeck and imagine how it would be anchored out somewhere away from it all. 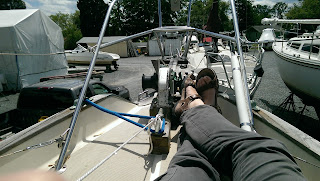 Here, you can see I still haven't replaced the panels behind the nav. desk since replacing the chainplates. Oh well... Other priorities right now. Anyway, I am looking to move the VHF from the companionway to just above this desk. I got a new VHF, a GX1700 with internal GPS, along with a remote hand mic. The VHF will go to the nav desk, where the remote mic will go somewhere near the companionway or in the cockpit which has the same display as the radio itself. No chartplotter, for now, even though that's on the list. Just one less thing to mess around with for now. 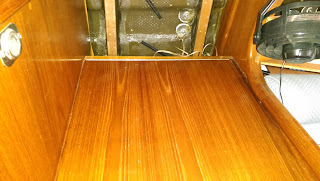 Anyway, behind the nav desk, there's space behind it for storing some things. I decided to mount a barrel connector for attaching the RF cable from the radio. While more connectors between the radio and the antenna is not necessarily a good idea, I wanted to have a connector mounted somewhere in case electronics were to be swapped without having a huge cable pig-tail. 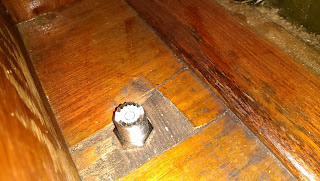 Plenty of other things being planned and I have been asked by several people if I'm looking at getting the boat in the water this year. Right now, I can't say that I'll be able to. It would be nice though. The work I'm doing now needs to be done right the first time. There's no do-over's here. I'm not expecting to be sailing this year, but if I can get the current project done this summer, then I'm sure I can get the other projects taken care of and on the water about middle of next year.


Don't hold me to it, but just an idea of what could happen.


Maybe after a while, I could turn this from a refit blog into a sailing blog, as it was intended. I'm happy I have the support and encouragement from others who are looking forward to seeing me out on the Chesapeake Bay.
Posted by Dan at 2:32 PM No comments: