It has been a good weekend. In an update to the previous post, I did some more wiring on the boat.

Spent a few hours today working on actually mounting/installing the Pronautic 1230P charger I bought TWO years ago. I recently ordered a couple of Firefly batteries for my new house bank. Since I want to make sure the batteries are taken care of, I had to get the charger set up. I ordered some 10/2 wire and some ring terminals from Genuinedealz to connect the charger to the batteries. While time consuming, it wasn't too difficult. I mounted the charger to a couple pieces of oak I had laying around and went head first into the starboard quarterberth to mount the setup to the bulkhead. A little tight but manageable. 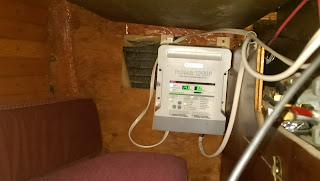 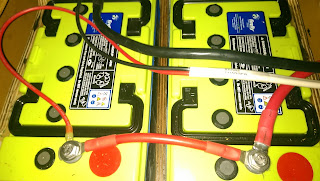 I routed the new wires the same way they were with the old charger directly to the battery bank. When I flipped the breaker on the panel to turn on the charger, a fan started and in a moment, a click started charging to the batteries. Very happy this worked out. I don't have a starting battery yet and will run wires for one when the time comes. When I left the boat today, I turned on the vent fan that came with the Airhead for ventilation. The Airhead website said the fan draws .08 amp. So I figured even leaving it on for the week, or even two weeks, it wouldn't drain the battery too much, too fast. And now the charger is in place, I can top off the batteries during my visit.

In my last post, I mentioned ordering a panel from Front Panel Express using their software. Well, it came in and I'm pleased with how it turned out. Black anodized aluminum with engraved letters filled in with yellow, 7"w x 3.25"h. Everything lined up nicely for the toggle breakers. I'd say this was a good test panel for the possibility of changing the main breaker panel by the companionway. Changing the main panel isn't a near-term project but something I can play around with in the design in the meantime.


This panel will be mounted just under the front of the nav desk where an old cassette car stereo was mounted. This will be used to wire the VHF in its new location, just above the nav desk. Later, perhaps other items. At least it won't require multiple wires to be sent back the main panel, keeping the wiring clutter to a minimum.

Lastly, the mast. The shop I'm having do a paint job is also doing a few modifications. They changed the setup by the masthead. This will help keep wires and halyards from interfering with each other. They're changing the location of the conduit for running wires up. Instead of being on the back side where the track is, they installed a new one on the front side of the mast.

The anchor/tri-color light was in the middle of the masthead and now on its own pedestal on the side. The wires will run up the middle of the tube instead of being external. They also patched up a lot of holes, the largest being the hole from the baby forestay that I didn't intend on using and also a hole used for a box sheave. They patched up a few smaller holes around the mast and boom that were mostly unused. A new location for the VHF antenna is also installed. Soon, it will be sent for painting and then the hardware will be reinstalled.

The guy at the rigging shop suggested connections shouldn't be outside of the boat. So he's talking about putting a short tube on the mast step that will go down a bit (maybe 1") into the deck. Then connections would be made inside the boat at the bottom of the compression post. I'll still have to see how big the holes are at the bottom of the compression post to see how feasible it would be for any connectors to pass through. Below is a picture of a tube on the mast step at the shop I used to visualize what it might look like. The final product certainly wouldn't be as high as in the picture. Should be shorter that would still allow the mast to be stepped/unstepped by an owner. 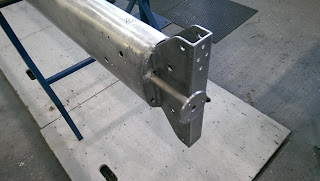 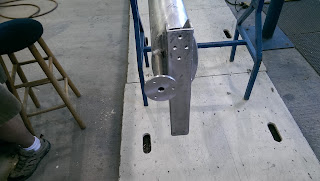 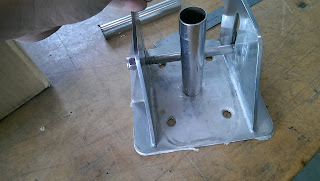 At this time, not much to update in regards to the insurance claim on the fallen tree hitting the boat. I've been told I need to contact workshops to get detailed quotes for getting the damages fixed.

Lately, I've been side tracked, or maybe distracted, from a couple projects due to focusing on the mast and the tree damaging the boat. I hope to get back on track and tackle the major projects I've been working on over the summer that still isn't quite done yet.
Posted by Dan at 9:31 PM 6 comments:

The mast is now sanded down. Used paint stripper to get out the paint in the tracks. I recently went for a short visit to the boat to talk with a rigger where we chatted about additional work to be done. All to prepare it for repainting.

They should be stopping by the marina to pick it up soon.

I setup new batteries for the house bank, in place under the starboard quarterberth. I ordered wire that will connect the batteries together and got to use my hammer crimper for the first time. I think it turned out well and finished nicely with heat shrink. I'll shorten and finish the other end when I'm at the boat next time.
﻿﻿﻿﻿

I was looking over the current wiring beyond the battery bank, on top of the fresh water tank and looking to redo some of them. Current wiring that went to the batteries had 5/16" terminals but need to be changed to 3/8". In general, I think it could be cleaned up a bit, with identifying where they go and putting some labels on them. 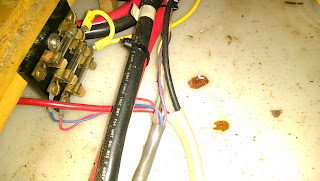 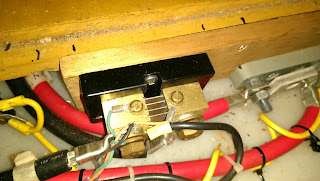 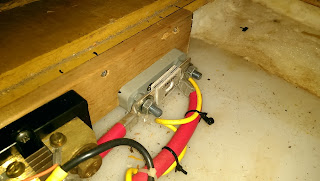 Now the mast will be away, I can get back to other projects.

One of the other projects I'm working on is putting together an electrical panel with breakers by the nav desk. I originally wanted to use a bus bar to connect the new VHF in its new position without running multiple wires back to the batteries. Someone suggested I install an actual breaker panel to make sure power is disconnected so went with that idea instead. There will be enough positions for breakers to add a few other items if/when the time comes to expand the electronics.

I ordered the panel through Front Panel Express using their free software was pretty easy to put together. Black anodized aluminum with the HIN engraved into the panel. The breakers are Blue Sea A-series. Blue Sea is nice in that they have the dimensions for hole spacing and cutout templates for their products.


Next post I'll show the panel after it arrives.
Posted by Dan at 9:02 AM 2 comments: