I went to the boat briefly today. It's rainy and windy so not much else was going on.

I have a survey left over from the previous owner when he bought the boat in 2007. The engine hours recorded in the survey says 714hrs. Since owning the boat, I've run the engine for six or more hours yet the hour meter has not moved. 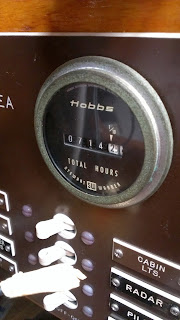 I used some spare speaker wire I had laying around the house to hook up to the meter to test whether it works. It took a couple seconds but it clicked and started making a sound showing that it did work and moved slightly. I flipped switches, turned the engine key on from the panel and couldn't see anywhere that would get it to work. I'll trace wires around another time to get it working along with the engine.

That didn't take long but the main work was to remove the tiller. The nut and bolt are made of bronze. I first used a dremel to cut a slot on the head of the bolt. Using a wrench and a heavy duty screwdriver, the still wouldn't budge from each other. I then took the dremel and cut away from the nut. I then used a smaller screw driver to pound the bolt out of the hole. The tiller was still tight between the rudder cheeks so I had to work the bolt out while moving the tiller up and down.

Now, it's at the house where I will have it kept indoors while it dries out. I can then strip it down of the old varnish, fill in some holes, epoxy a split and then refinish it. 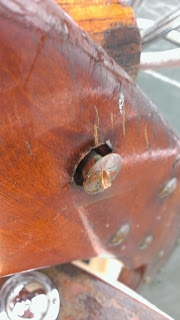 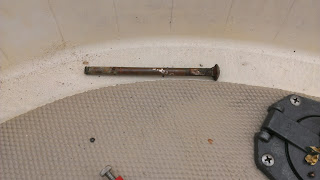 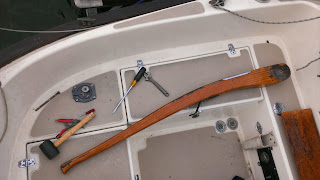 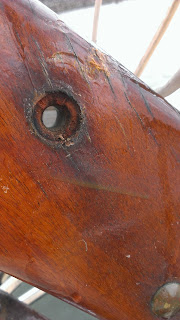