I spent a good part of the day removing the hoses from the head. Everything went well, mostly.

I first removed the vent hose. I had to route it past the other hoses and through the counter top. I ended up breaking the part the hose was attached and left the hole open. 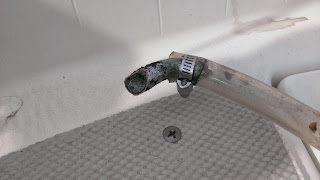 The first part of the larger hoses I removed was from the waste deck fill to a switch between deck pump-out and overboard discharge. The worst part of this was there was a little deposit left in the hose. Thankfully, there wasn't much but it did smell pretty bad for a moment. Thankfully, I had lots of paper towels and some cleaner/disinfectant. I covered the hose with a plastic bag and a rubber band.

﻿
After covering the hose with the plastic bags, everything else wasn't too bad. I removed the rest of the hose going from the manual pump to the overboard discharge thru-hull.

Here the hoses are on the deck that I soon put in a black trash bag. 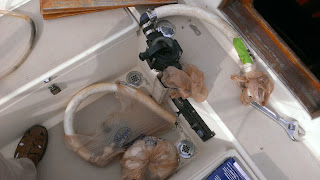 Removing the hoses from the head cleaned up the space under the counter. The white hoses that are left is for the bilge pump. The clear ones are for the sink that's in the head. I'm thinking to remove the sink from the head. With the size of this boat, it doesn't seem necessary to me to have a second sink. I also cleaned up some more of the space, like the caulk that held the head/holding tank and the dirt covering the counter. Now it's more ready for installing an Airhead. 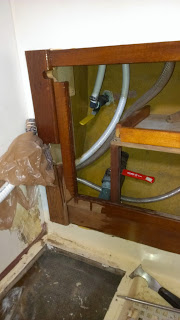 I was thinking of how it would be to remove and cover the thru-hulls when I haul the boat and make some more room under the counter. Another thought is to keep the thru-hulls in place, at least the one under the counter, maybe for a watermaker in the future. Of course I'm not going to continue with the one used for the head so it'll be replaced with a new one. The other thru-hull to consider is the one that was used for the head's water intake. It's right next to the battery so I'm thinking that can definitely be removed and covered. One less thru-hull to worry about.

I was going to remove the tiller to bring home to refinish it and fix the crack on the hand-hold end. When I went to loosen the nut, the whole bolt turned as well. Now, I'm trying to think of how to remove it. There's no way to hold both ends. The smooth side is recessed. I'll have to figure out how to remove it in order to refinish the tiller. 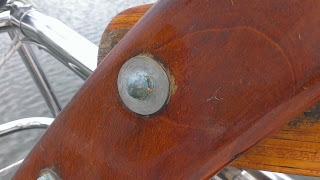 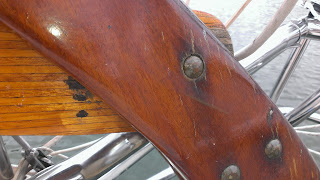