There seems to be quite a few wasps around. Last weekend, I took the mainsail cover off and found a couple mud clumps around, then raised the main sail and found more within the folds of the sail. Today, I went for just a short time and did some cleaning/organizing.

Today, like last week, there was a wasp that was flying in and out. Last week, I just sucked the thing in the vacuum and that was it. Today, I did something different. I wanted to keep things out of the boat. There's also a lot of spiders around too. It doesn't take long for them to build their webs either.

Just as I was wrapping up the cleaning, the wasp I saw today flew in as I was closing things up. I took some green tape I had on hand and used it around the opening of the companionway boards and hatch. This sealed things up pretty good, I think. The opening is about 1/4 inch so anything can fly/walk in as they please.

Here I taped it up on the inside of the cover and outside of the boards. 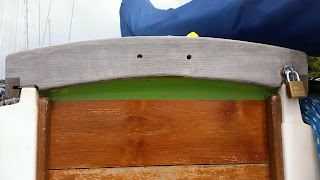 This wasp I mentioned isn't a small one either so I'm really not comfortable with them flying around me. The two holes in the front of the hatch is for the Nor'sea plate that came with the boat that I will attach after doing some finish work on the wood. So, those two holes are a little too small for the wasp to get through. I made sure to tape around side corners too.

The hatch as a clear (mostly) top that anyone could look down into. It didn't take long, but the thing was flying into the hatch. It really wasn't too happy. It was flying into it and walking around trying to find a way out.

I took some video trying to get a shot of it. it's about 1 1/2 inches long. This is a still picture of the flying visitor. 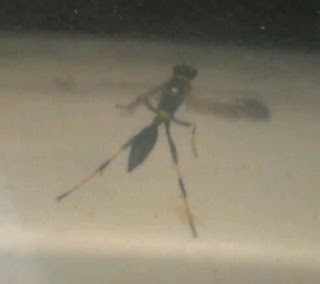 The few I've actually seen are all about the same size. When it starts getting colder, I plan on going through all over the boat to make sure there is no clumps of mud hiding anywhere. I did find it interesting that one of the clumps I found last week on one of the mast winches had dead spiders inside it. Saving for later?

Creepy little things. Now if only I could get rid of the spiders, that would be great too.

In hopes to at least keep the flying critters out, I'm thinking to make a couple hatch covers. One with Sunbrella canvas material to block some light and another made with a mosquito net I happened to have sitting around the house that will still allow airflow through the boat. I could use some sewing practice anyway.

The previous owner had the boat stored on its trailer in Arizona and it got infested with bees and now in mid Kentucky, I have wasps and spiders. How fun (sarcasm).

UPDATE: I just looked up some info on wasps. I found out that because of the mud clumps, this is actually classified as a "mud dauber".  I read stings are rare but I'm sure it's possible so I don't want to take any chances. I read that there are eggs inside the mud clumps so another good reason to look throughout the boat to get rid of them.
Posted by Dan at 11:44 PM