Got some wire supplies the other day. Had some additional wire I needed to replace/clean up. Mainly, I wanted to move the wires that cross in front of the engine out of the way. Along the way of planning this part of my refit, I saw one wire that wasn't even tinned (went to the starter), and most of the connectors didn't have any sort of heat-shrink. I felt it was a good idea to remedy those items.

I saw a lot of the wires went to a single-stud bus bar... not really a bus bar since there's only one post, but I wanted to install an actual bus bar to spread things out and have things better organized. The positive also has a cover. It was a little tight installing that one since there was so many other wires in the way but I got it where it would work out.

I found special connectors to use on this project. You'll see in the pictures below, they are 90 degree lug terminals. I mainly bought to come straight out from the selector switch to keep the wire from sharp bends. I previously had connectors touching at the battery switch so I wanted to prevent that. Now, when the switch is set to off, it's really off. The terminals are made by Panduit. The battery switch has 5/16" studs on the back so I got three of them (LCB2-56F-Q), and I bought one 3/8" (LCB2-56F-Q) that worked out well going from a fuse connected to the house battery and goes to the selector switch. (note: the description says pack of five, but the price is for individual connectors). 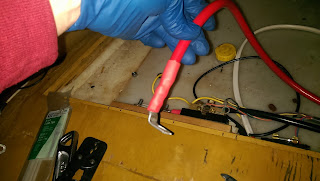 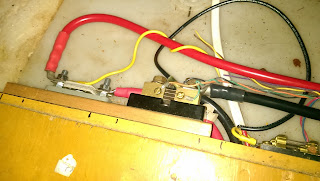 The wire supplies didn't stay organized for very long, but still somewhat grouped together. The large tool with red handles are not bolt cutters, but actually a crimping tool for heavy duty lug terminals (for wire larger than 6ga). The yellow handled tool is a wire/cable cutter. Makes some nice clean cuts. The blue handled tool is a ratcheting type for crimping smaller gauge heat shrink (not insulated) terminals (the red, blue and yellow terminals in the bags). 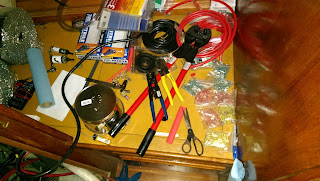 It's pretty time consuming to take old wires out, run the new one's in, set the terminals, crimp, heat shrink, then install. While it doesn't look like much, I'm just getting started. Plenty more to follow on this project.
Posted by Dan at 6:36 PM