This part of my refit plan, I'm looking at replacing the Garmin 546s and Furuno radar. Lately, the Furuno stopped working which I may just need to trace the power to see if I can get it working again. While the 546s still works, I like the idea of having a bit larger screen. 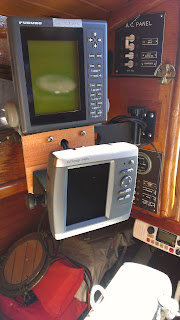 Both of these are mounted by the electrical panel on a swing out arm to be viewable in the cockpit. Both take up quite a bit of space and I'm thinking it would be nice to consolidate the two into one system.

My idea for the upgrade is to get a Garmin 4208 chartplotter with a Garmin Radar, either the 18HD or 24HD. The Garmin 740s also seems to be popular and is touchscreen and costs less. Currently, the Furuno radar antenna is mounted on a pole on the stern rail. I'm thinking to mount it a little higher with a Scanstrut mount on the mast.

I can mount this single screen on the swing mount but I'm leaning more towards the idea of placing it where the bulkhead compass is currently mounted. This way, I won't have to have it swing back and forth on the swing mount. I'll look into how it might work out later but this is my current plan.

If this new chartplotter is mounted in place of the compass, I thinking to make a new companion way panel that is low profile, but big enough to mount the compass. This panel would removable for the times when not sailing.

Garmin also has AIS capabilities that can be viewed on the chartplotter. This is something I considered adding to this installation but I may not use AIS (yet). Maybe a VHF radio with AIS receiver could be a good alternative. Another aspect of some of the equipment is the possibility of using it outside of the US. That's when the FCC comes in where a Ship Radio Station license and Restricted Radiotelephone Operator Permit seems to be needed. Just something else to research along the way.
Posted by Dan at 7:45 PM