I visited the boat a few times over the last couple of weeks. Mainly it was in an effort to stop some leaking. I've wanted to do some of this for a while anyway. Last time it snowed, it was immediately followed by rain. The snow covered the cockpit drains so the rain that followed had no where to go but through the engine panel, onto the engine and into the bilge. I was not expecting it, nor the bilge full of water. One of the cockpit lockers was full of water too. But, that was quite some time ago. It pushed up the need to seal up the engine panel a little better. So, I put some tape around the engine panel, took it off, put some 4200 around the edges and reinstalled. 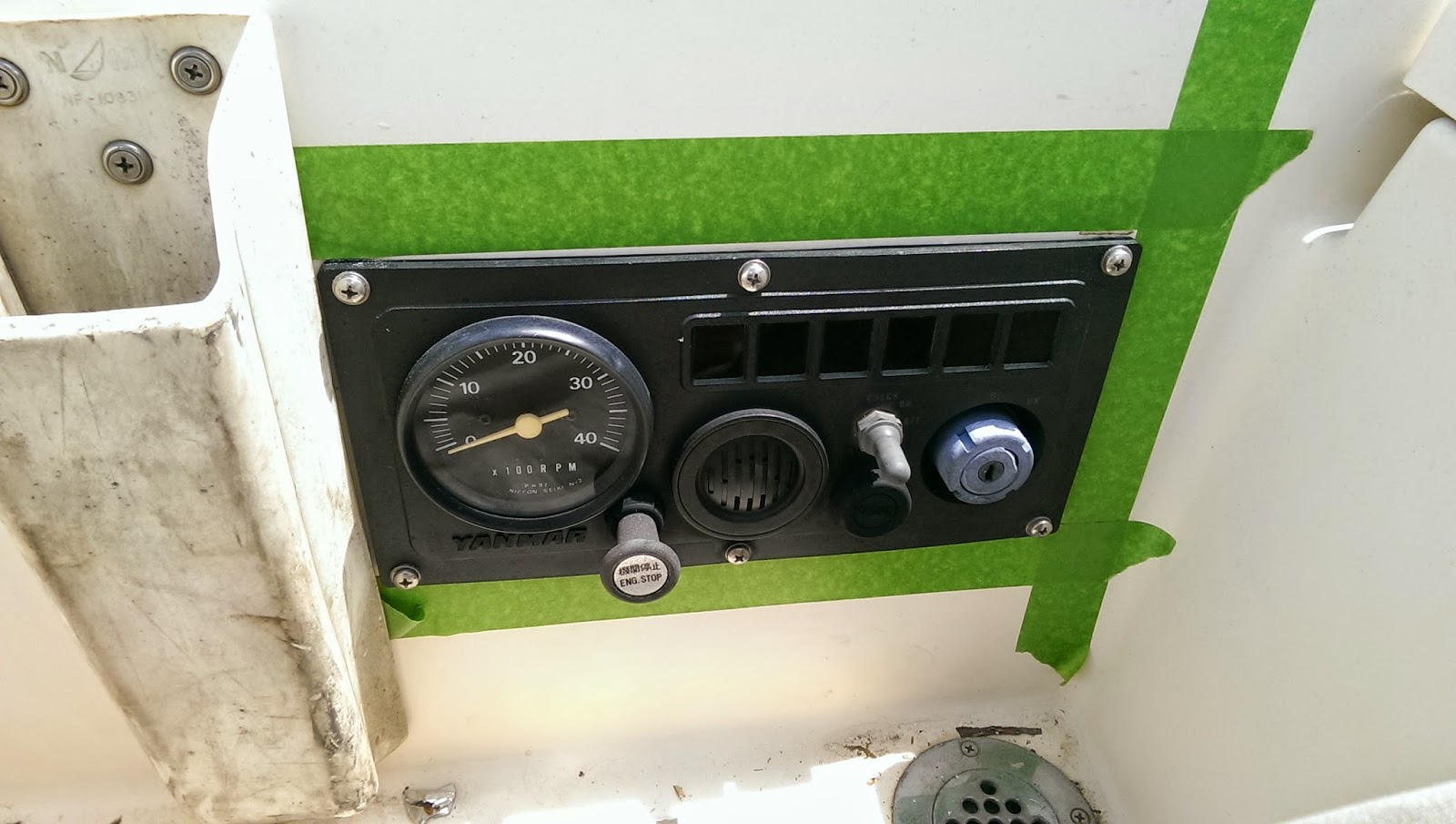 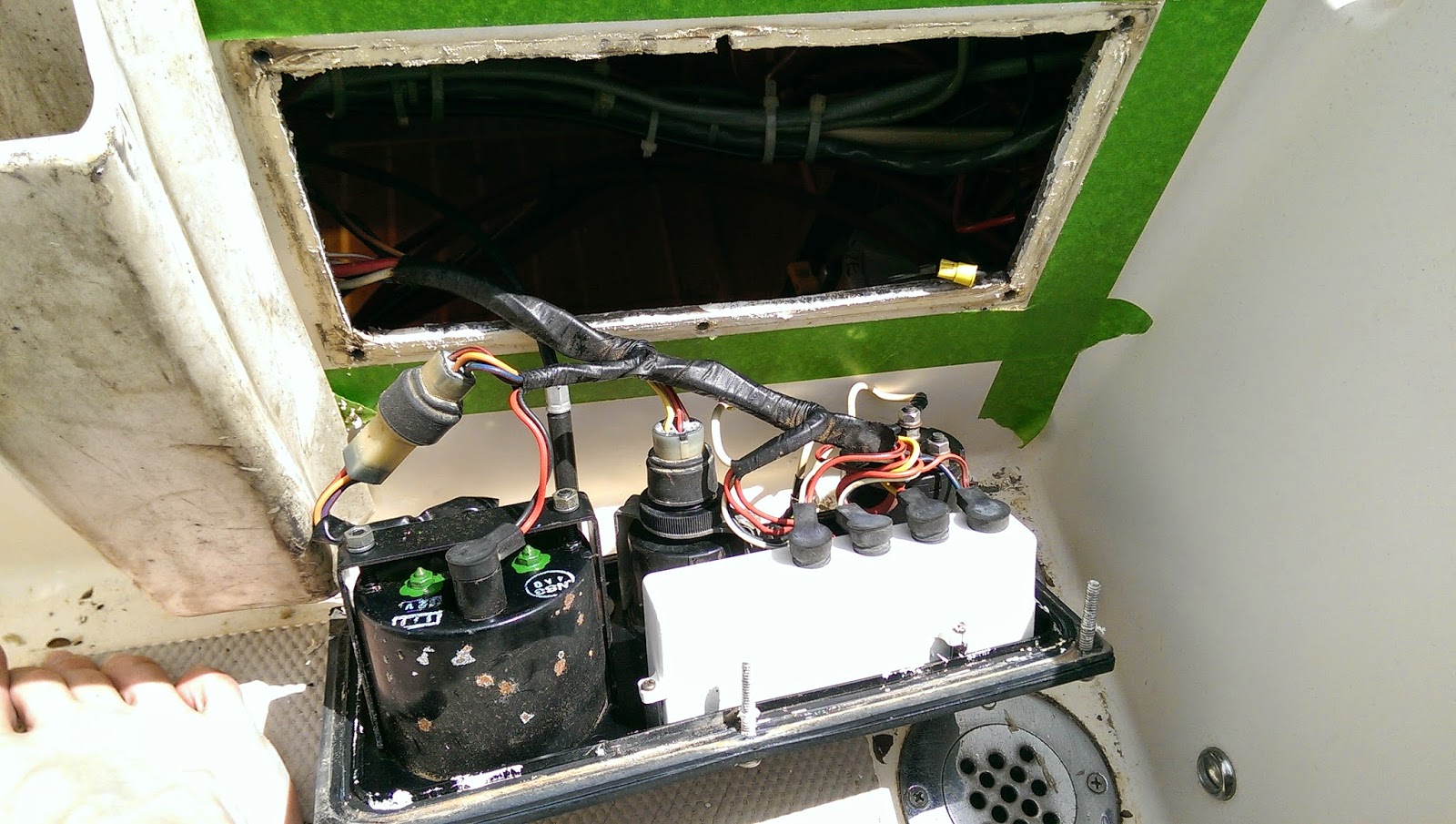 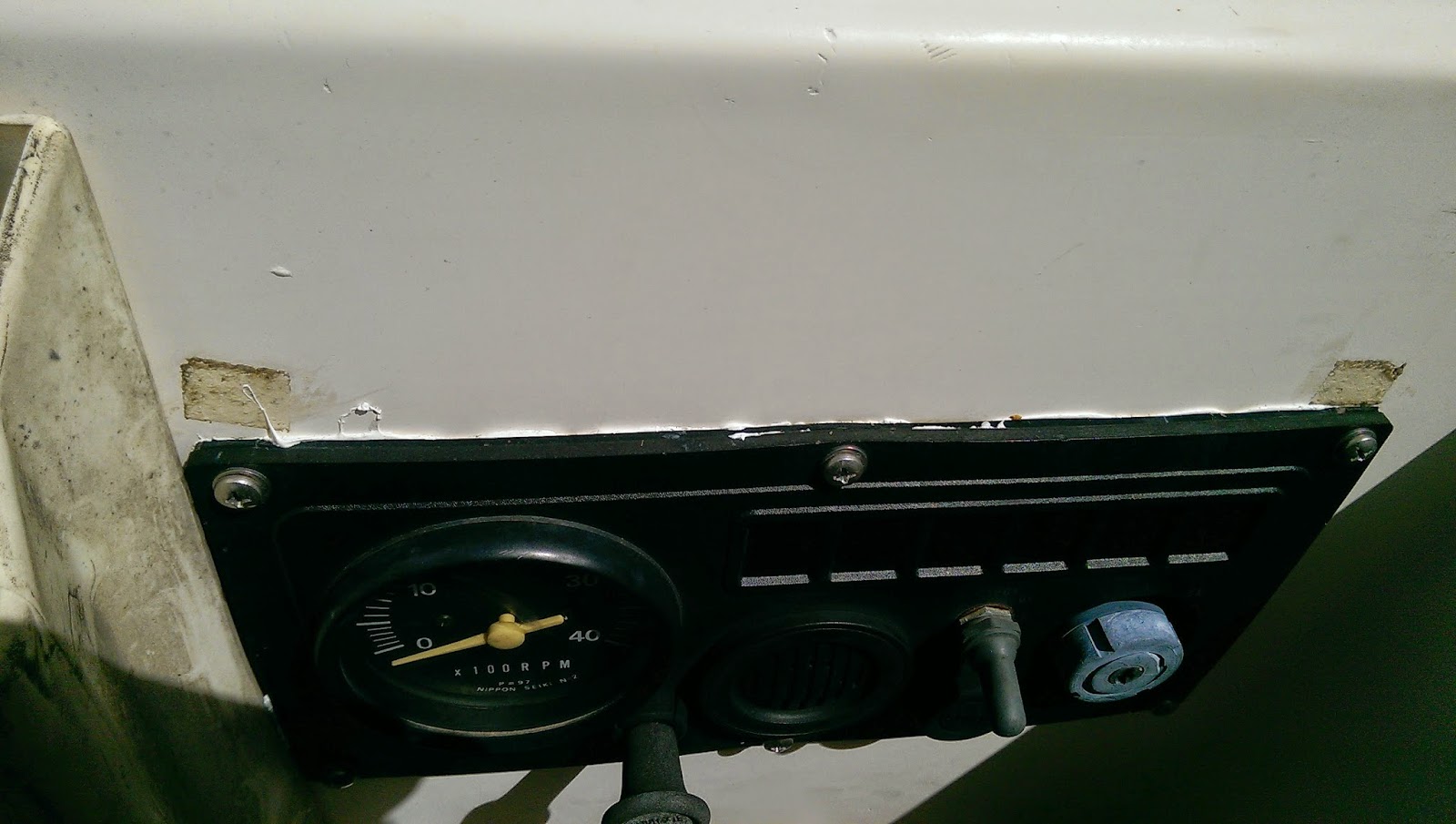 Here, you can see the streak on that one bolt where water was making its way past the panel. It was a slow drip but still needed to be stopped. 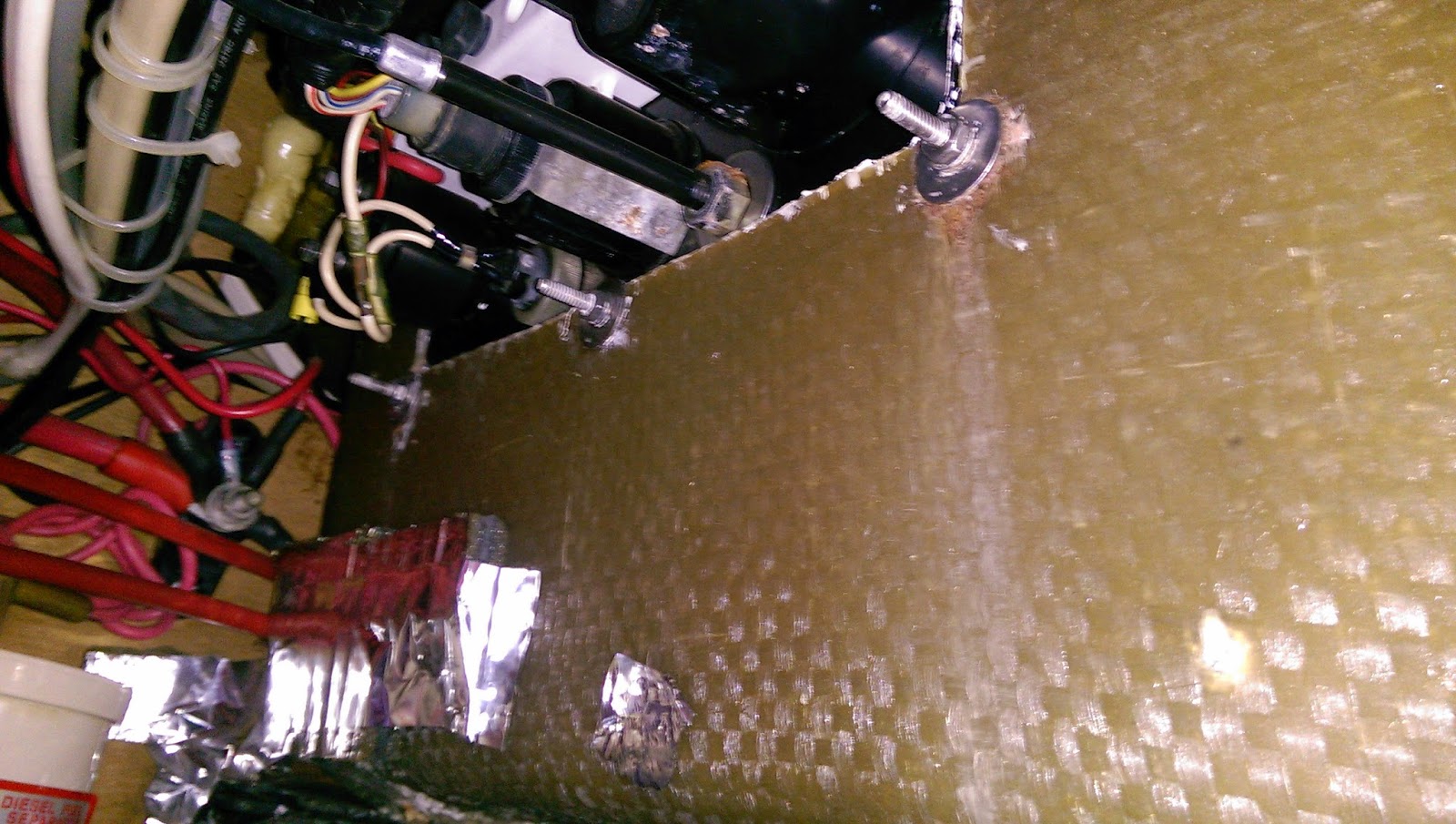 Unfortunately, the engine is right under that panel. So, any water making its way in, fell on the engine before it went anywhere else. So now I have another issue to take care of. It's not pretty but I need to Stop the engine from rusting any more and repaint/protect it in some way. 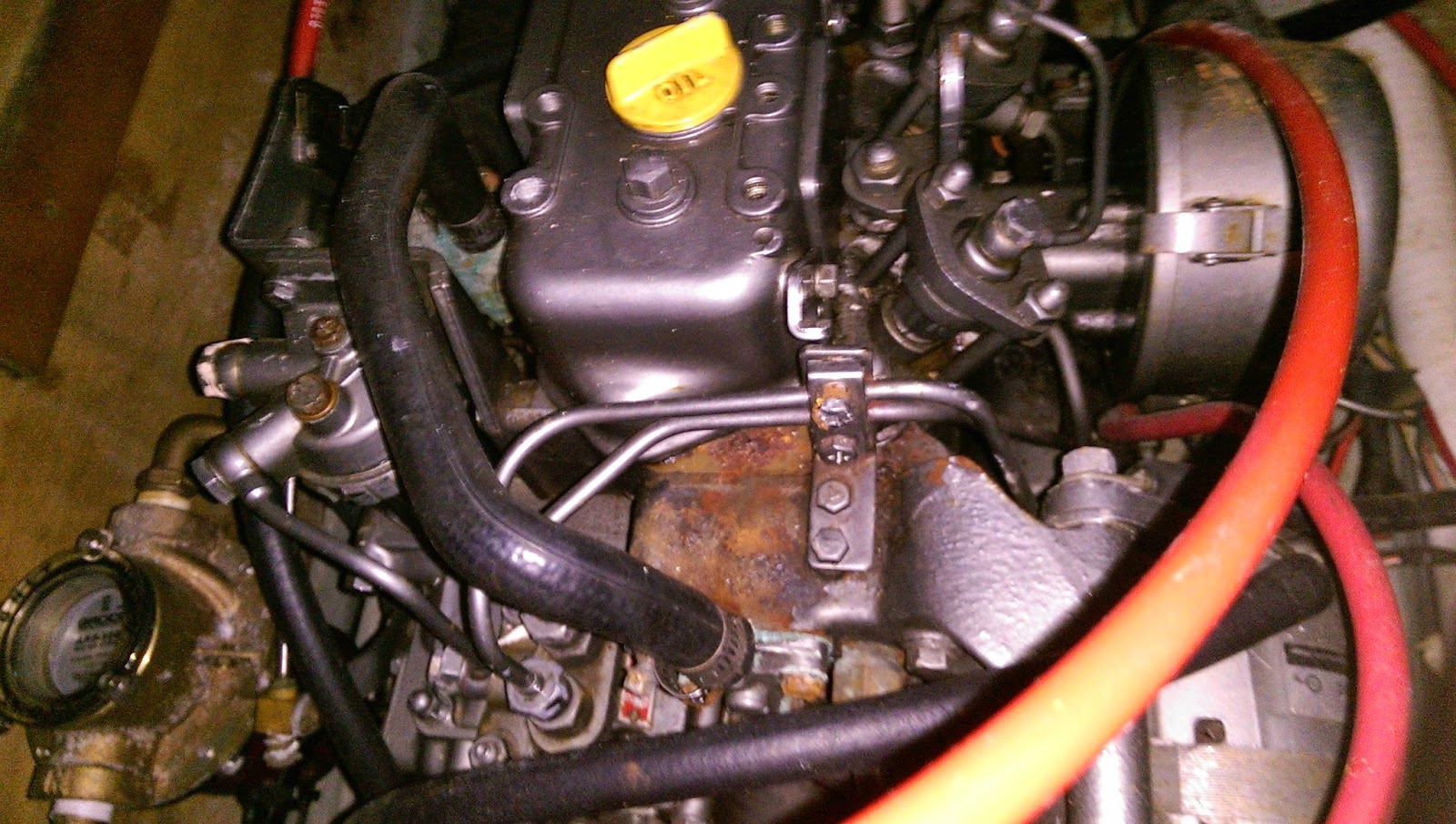 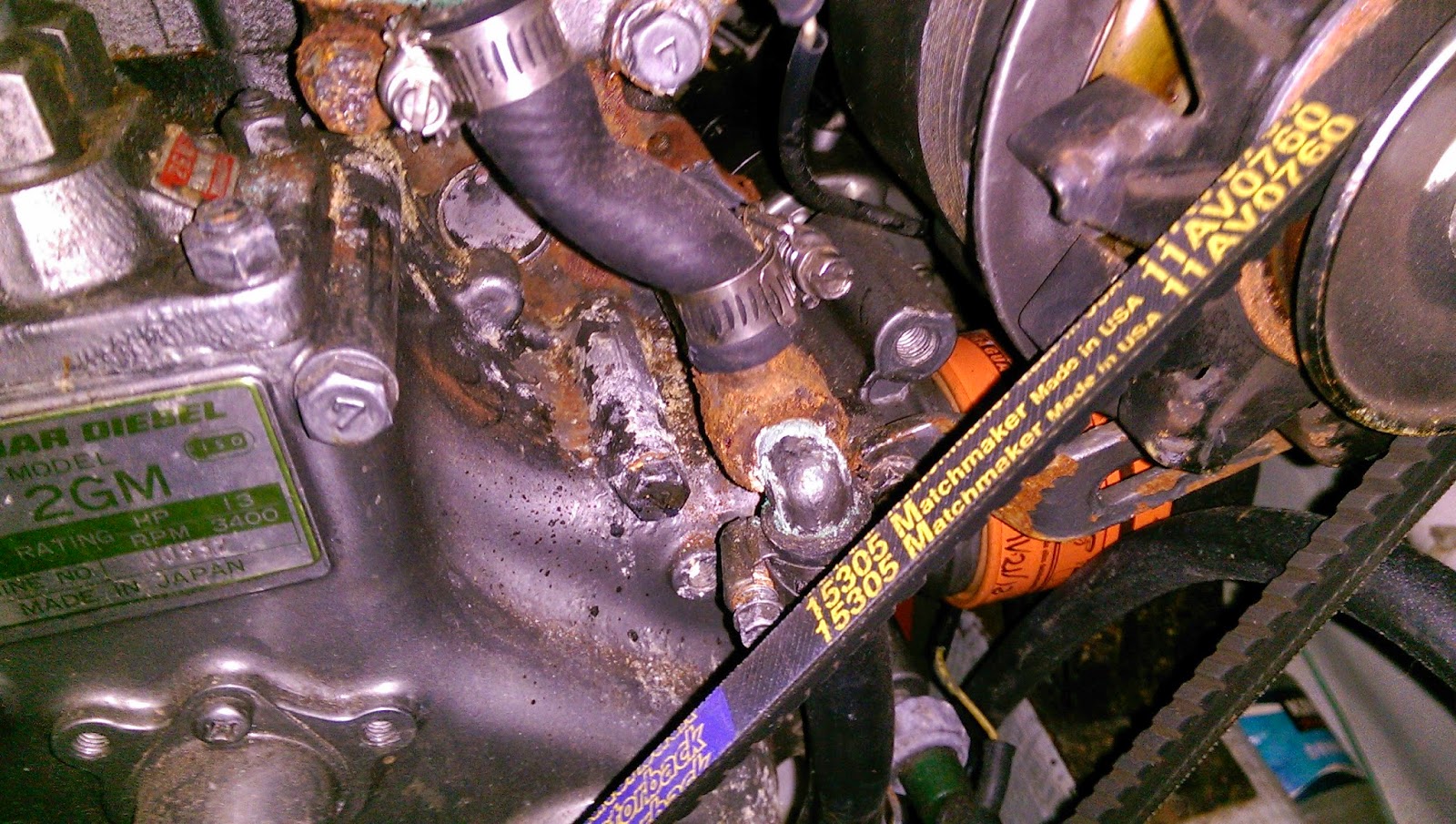 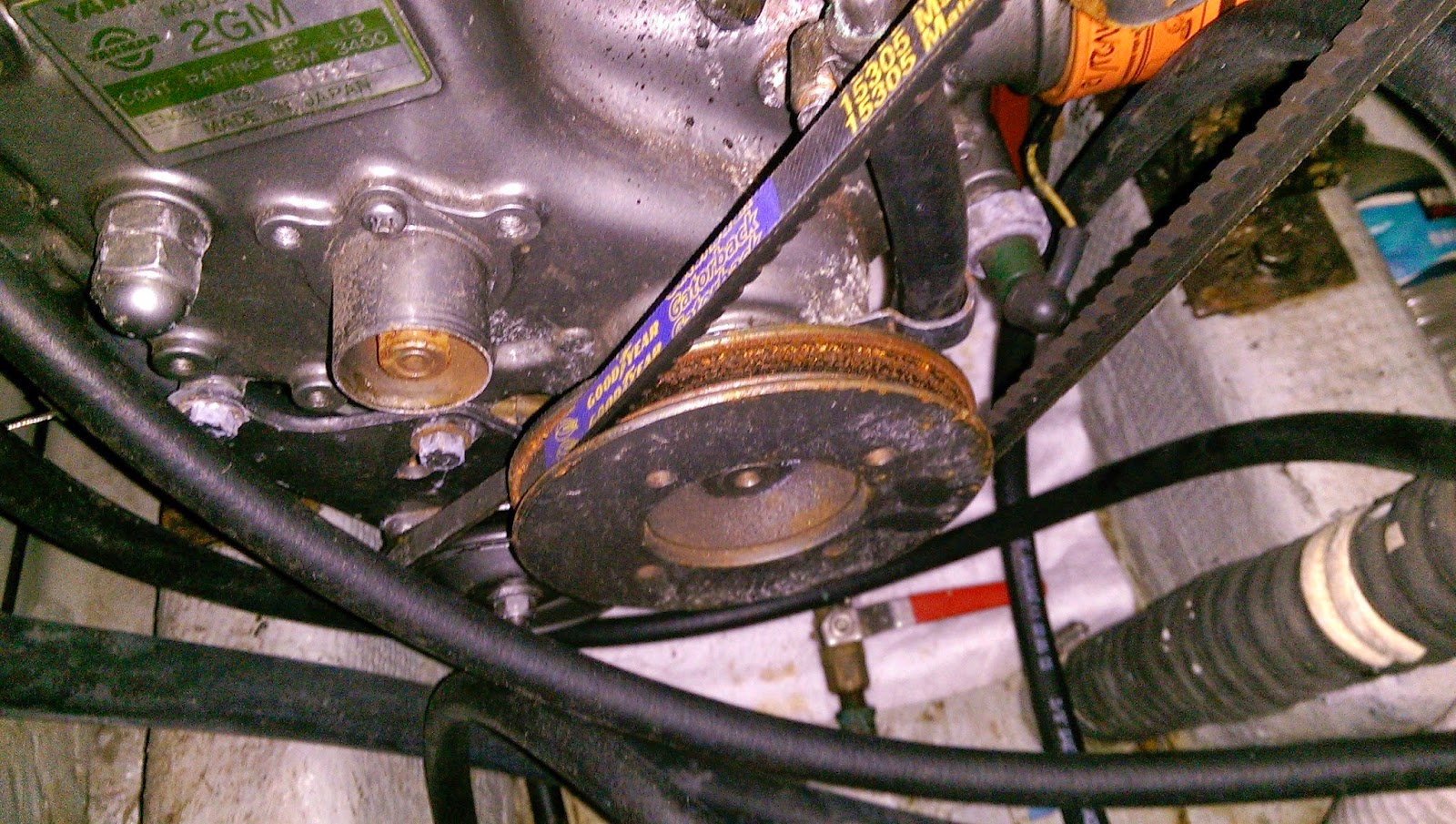 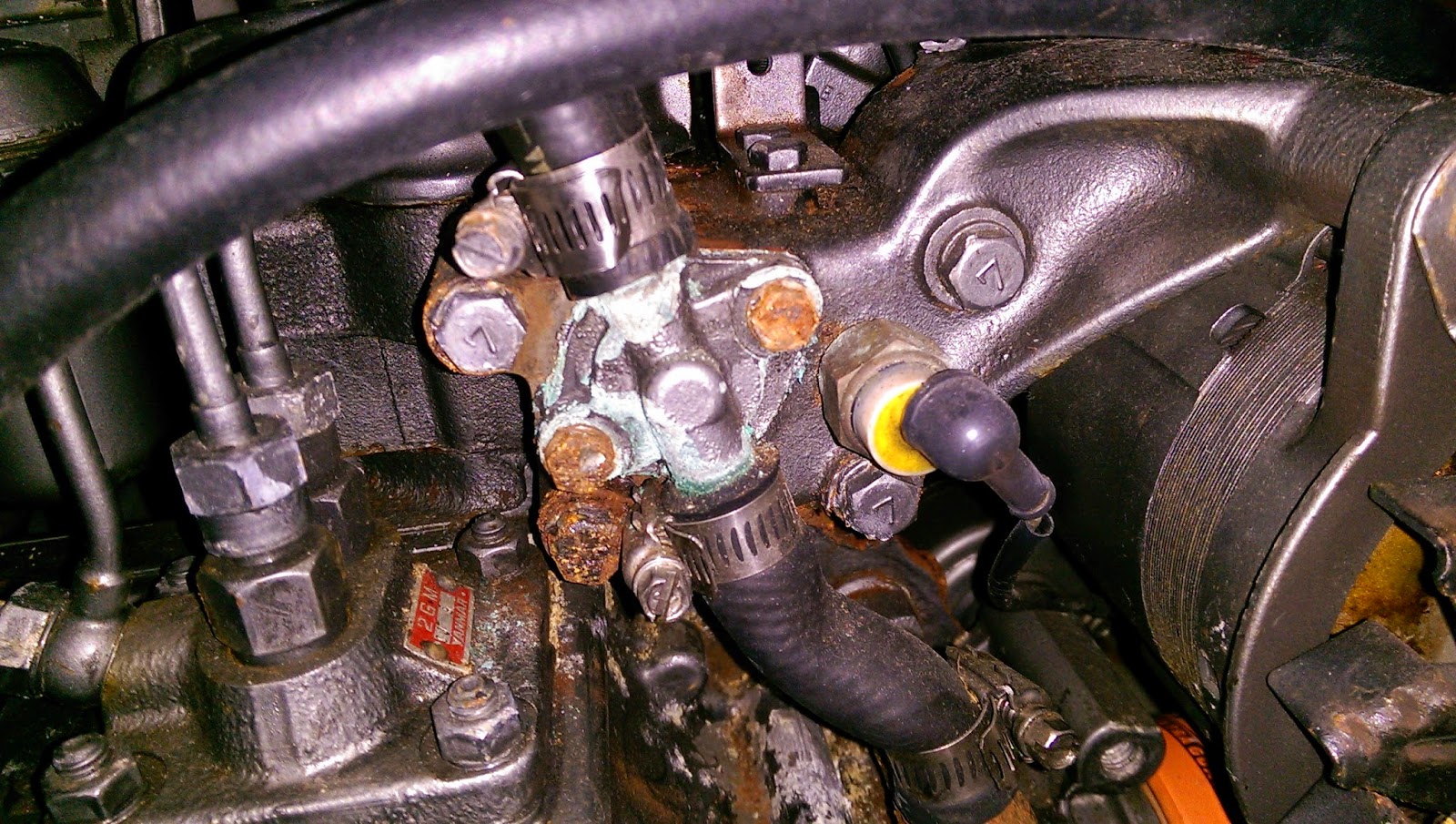 I wish that was the only leak I had to worry about but it wasn't. There's more!

The companion way has been leaking a bit too. Since the way the boat is stored, it leans to starboard. Any rain makes its way in and drips on the quarterberth. The cushion is old but still decent condition, and has been getting stained from the constant leaking. So, I dug out what I could of old caulking on the bottom of the companion way and filled the gap with some 4200 in hopes that it will help. Not only that, the starboard side has a bit of a gap with old caulking so I dug that out best I could and filled that with 4200 as well. 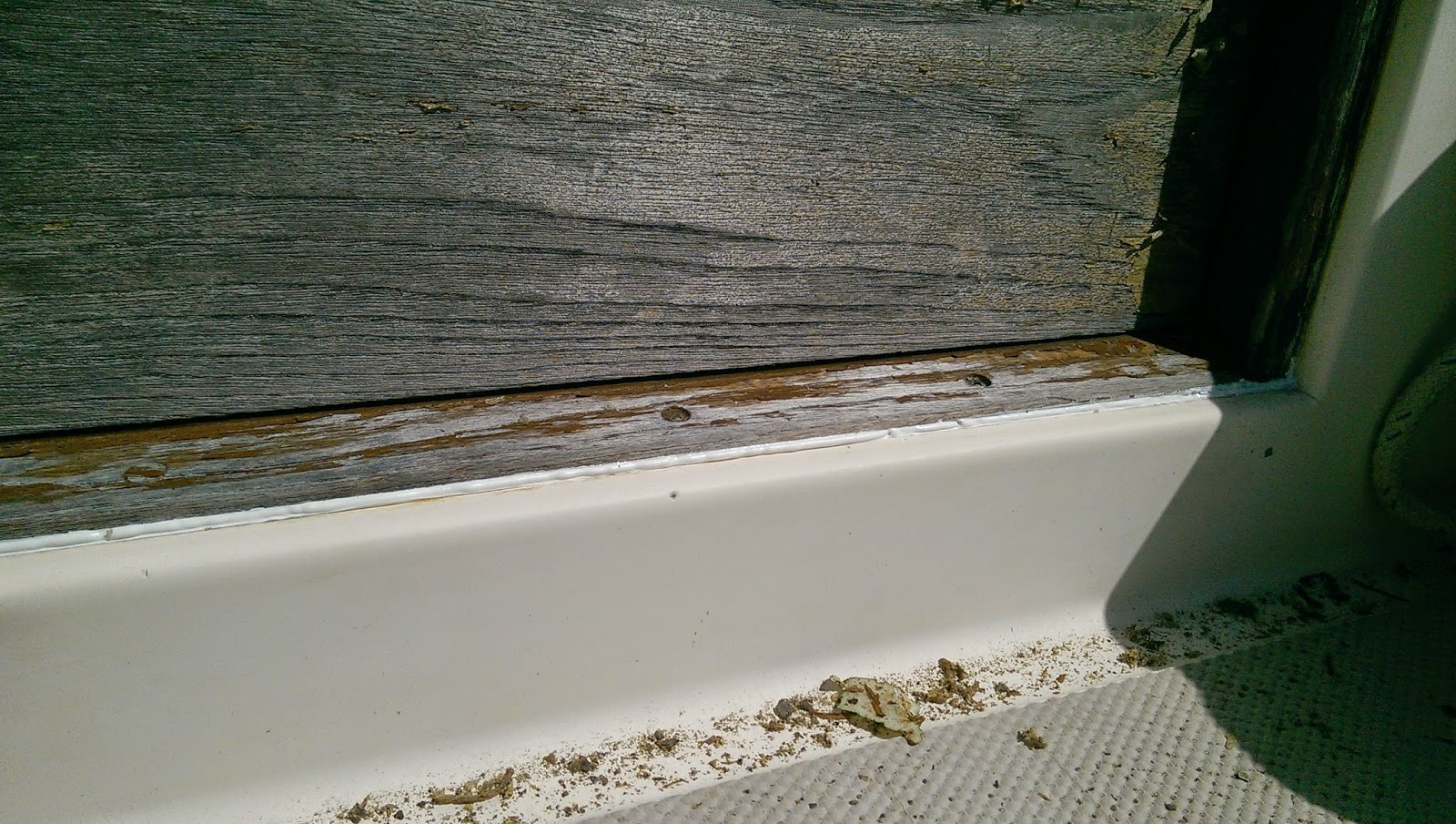 I'm sure I'll find out soon enough if this effort works out.

But the leaks don't stop there. I decided to feel around with my hands the underside of the cockpit drains and found out that there's some water making its way through them too. Not too bad, but still, enough to notice and again, I don't want anything dripping on the engine making things worse. I still have that left to seal up too.

Last, but certainly not least, the mast step. Yes, that leaks too. But this would be a bit more complicated to fix. First of all, no telling if (or how much) damage to the core there may be. Also, the wires/cable coming through the compression post and mast step on deck are old and in need of replacing. Right now, there's an RF cable (RG-8) and 5 conductor 16ga. wires. I would also like to add a power and network cable for a future radar install for the mast. I'm thinking to run the cables at one time so it's not needed to redo later if/when I want to install the radar. I haven't done it yet, but I want to get a tarp to at least cover the mast step to limit water ingress until I can get the supplies (wire/cable) so I can take care of this project.


Now the leaky parts are mentioned... I saw the LED strips that I installed in the head were not holding up as well as I expected. The double sided tape that is part of the strips were not holding well, especially the red strip. I decided to get some super glue, removed all the double sided tape for the red strip, then glued it into place. I went back a couple days later and saw that it is good and it is not coming out. 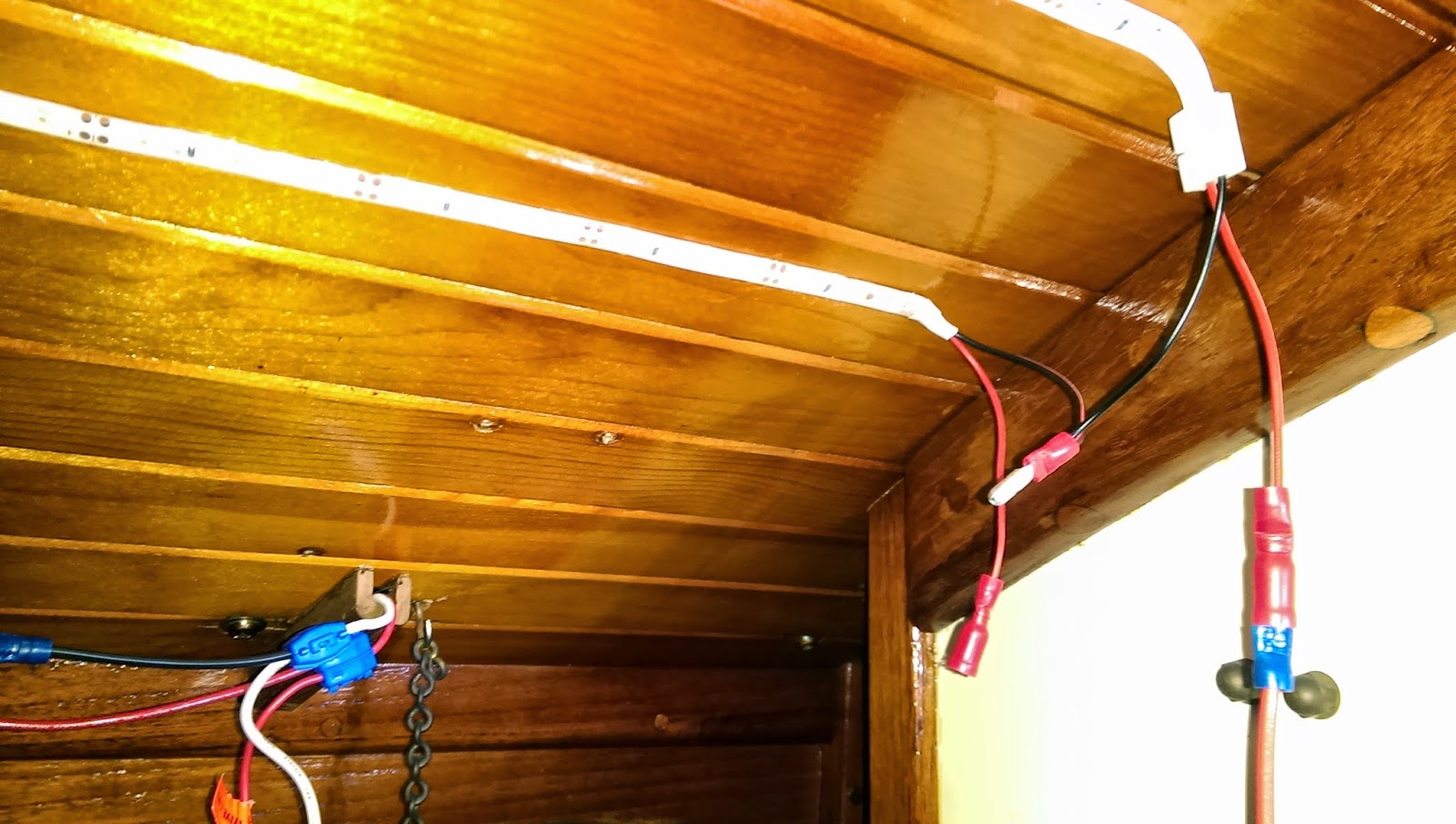 The panel that covers the front of the engine panel isn't exactly secured very well. There's a barrel latch at the top of it but it doesn't hold it in place any more. I bought some bronze Perko hooks to hold them in place. (actual bronze hooks instead of the more common chrome plated) I placed one on each side of the access panel. I also placed one on a cabinet that didn't want to stay closed on its own. I had to buy some #6 size bronze screws to go with them and everything went in nicely. I just had to make sure the placement was right in a couple spots otherwise they didn't seem to want to reach. The main reason I went with these was because the couple times I towed the boat, I would get to the destination and the panel would fall out, pushing the companion way steps out of place and I didn't want anything flying around causing more damage to an already older boat. I gotta take care of this old gal. ;-) 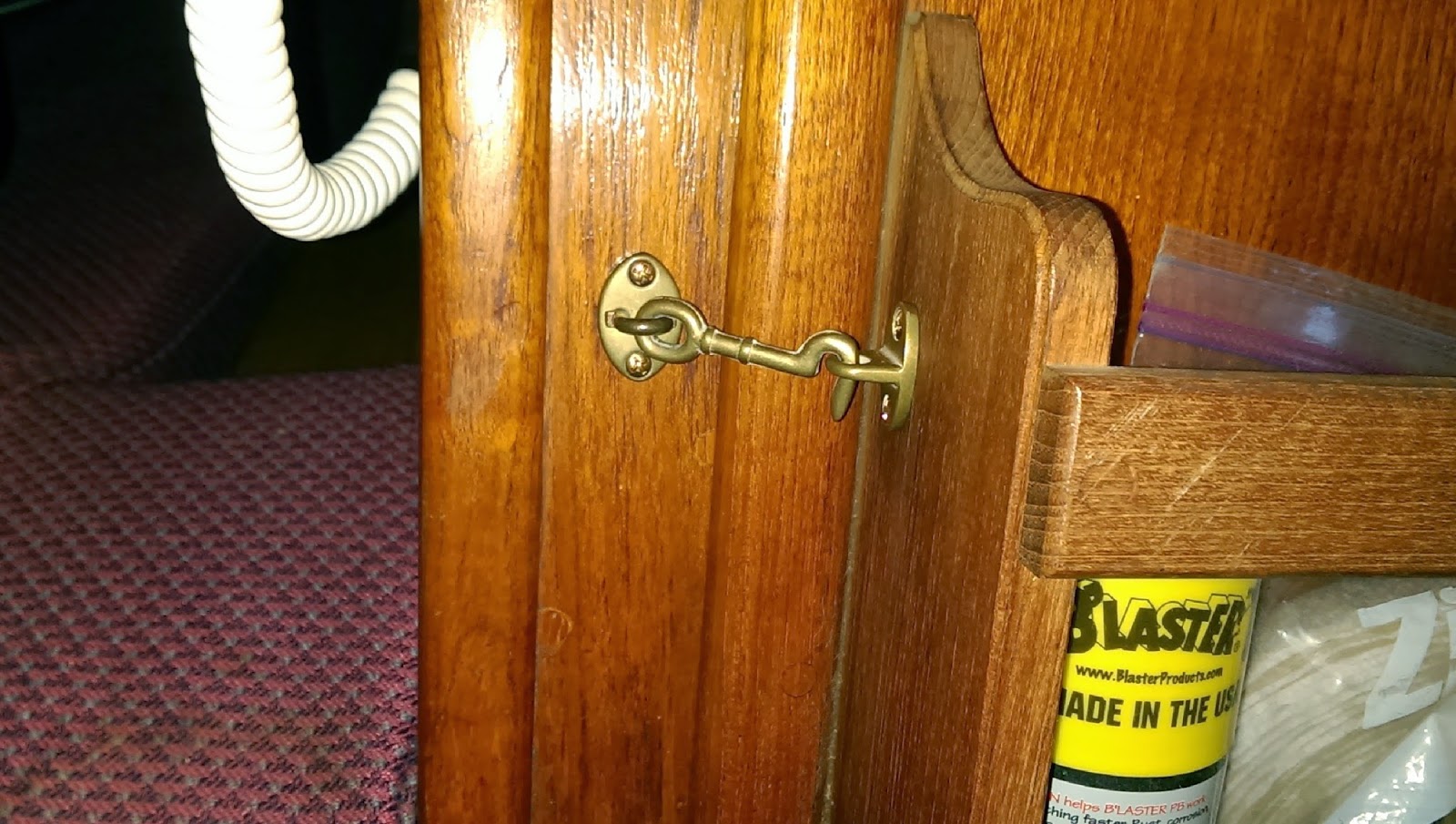 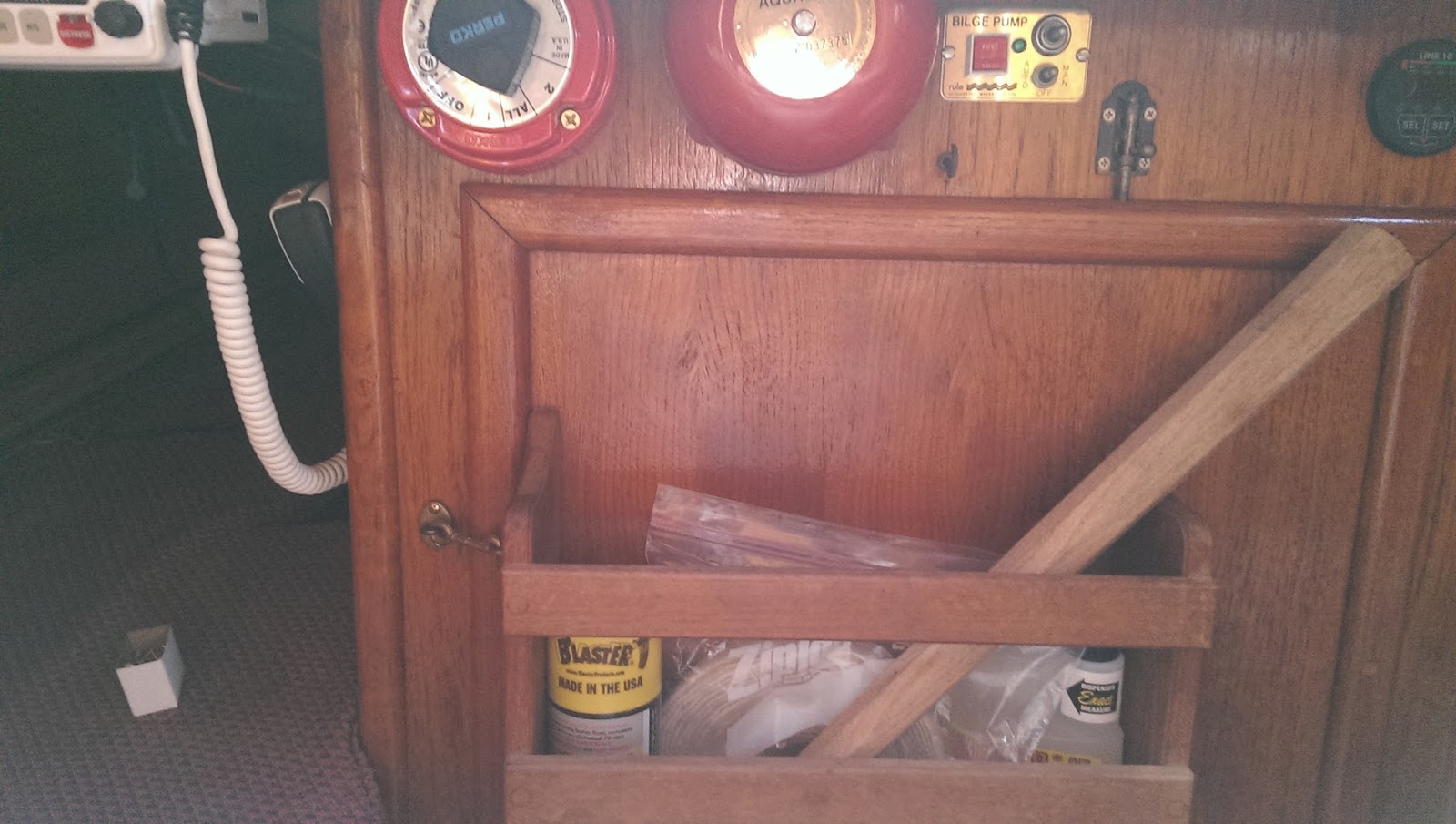 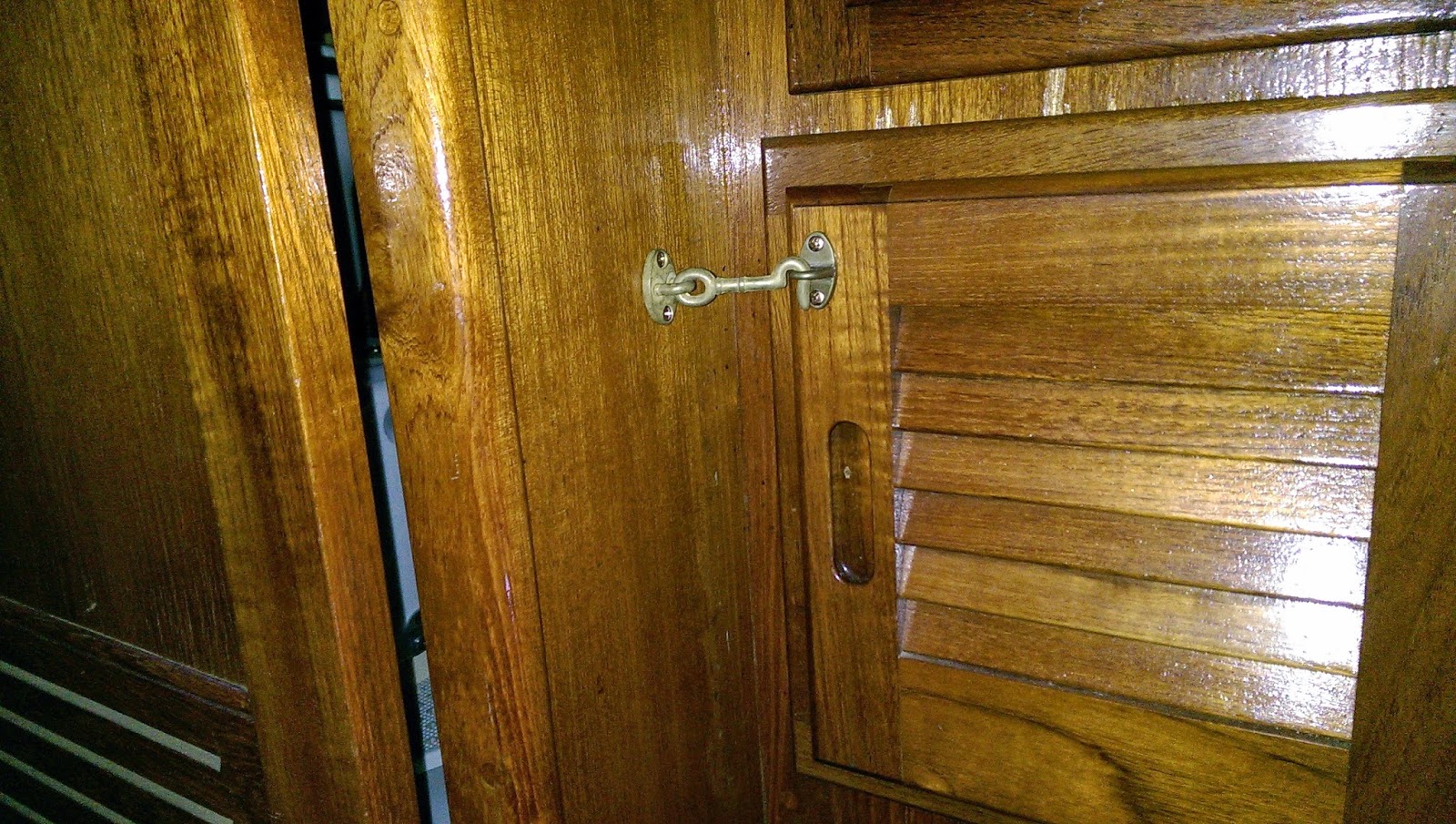 Now the worst part I discovered. I did the initial sealing of the companion way a couple weeks ago, the bottom part. This past Thursday, I stopped by the boat and found out someone had hit the trailer, bending the fender. With how it looks, I'm thinking it was a trailer that did it. But what's odd is that it wasn't in one place, but in another part of the same fender, it looks like it was pushed down. It doesn't look like it was so bad as to cause any issues with towing. I did bring it up to a lady working that the storage office but the cameras don't really pick much up. I could pursue this further but I am about to move to Northern Virginia over the next 3-4 weeks so I don't really have a whole lot of time to prepare. Right now, I may just have to push the fender out of the way of one of the tires that's about an inch and a half away. 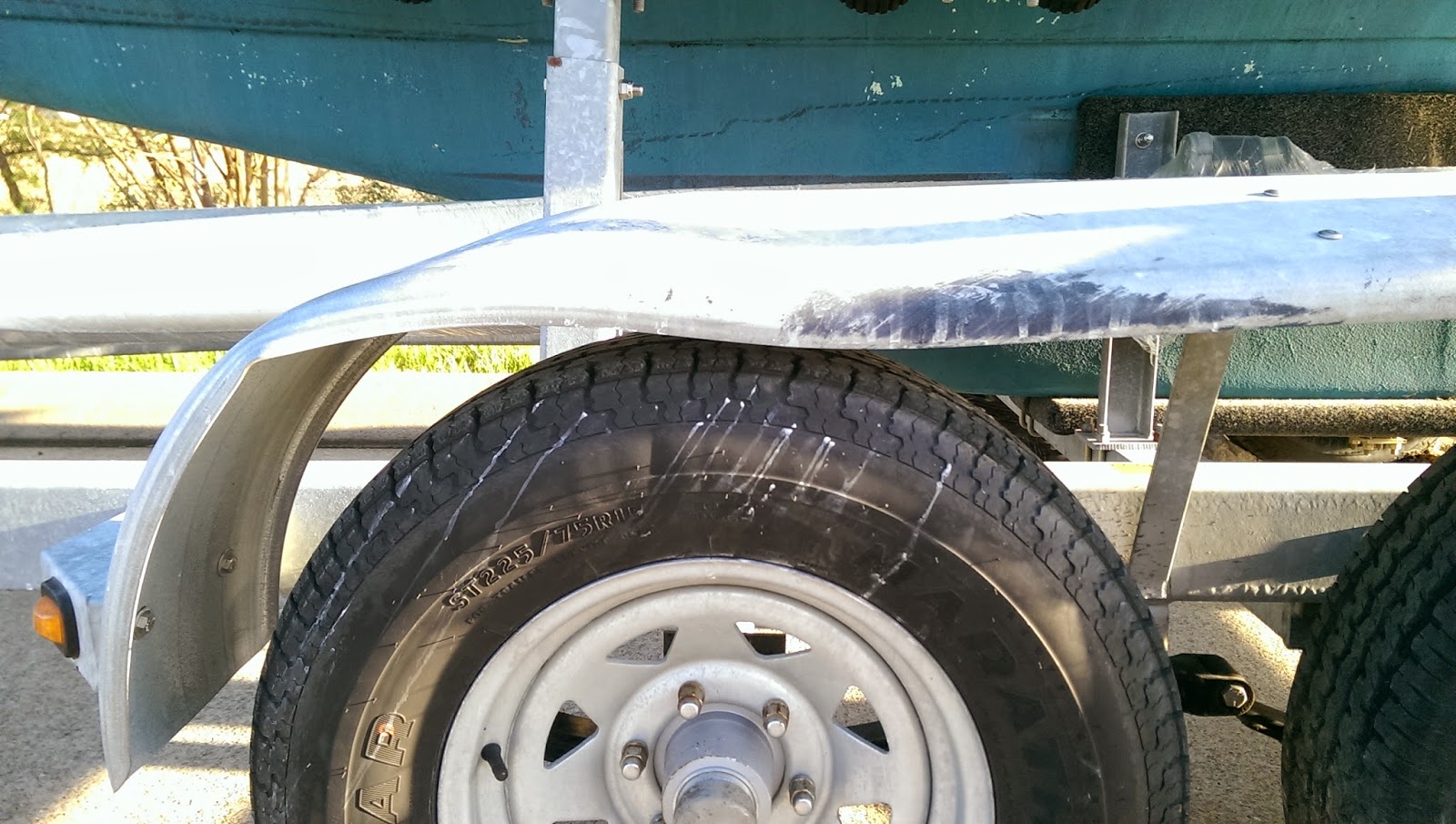 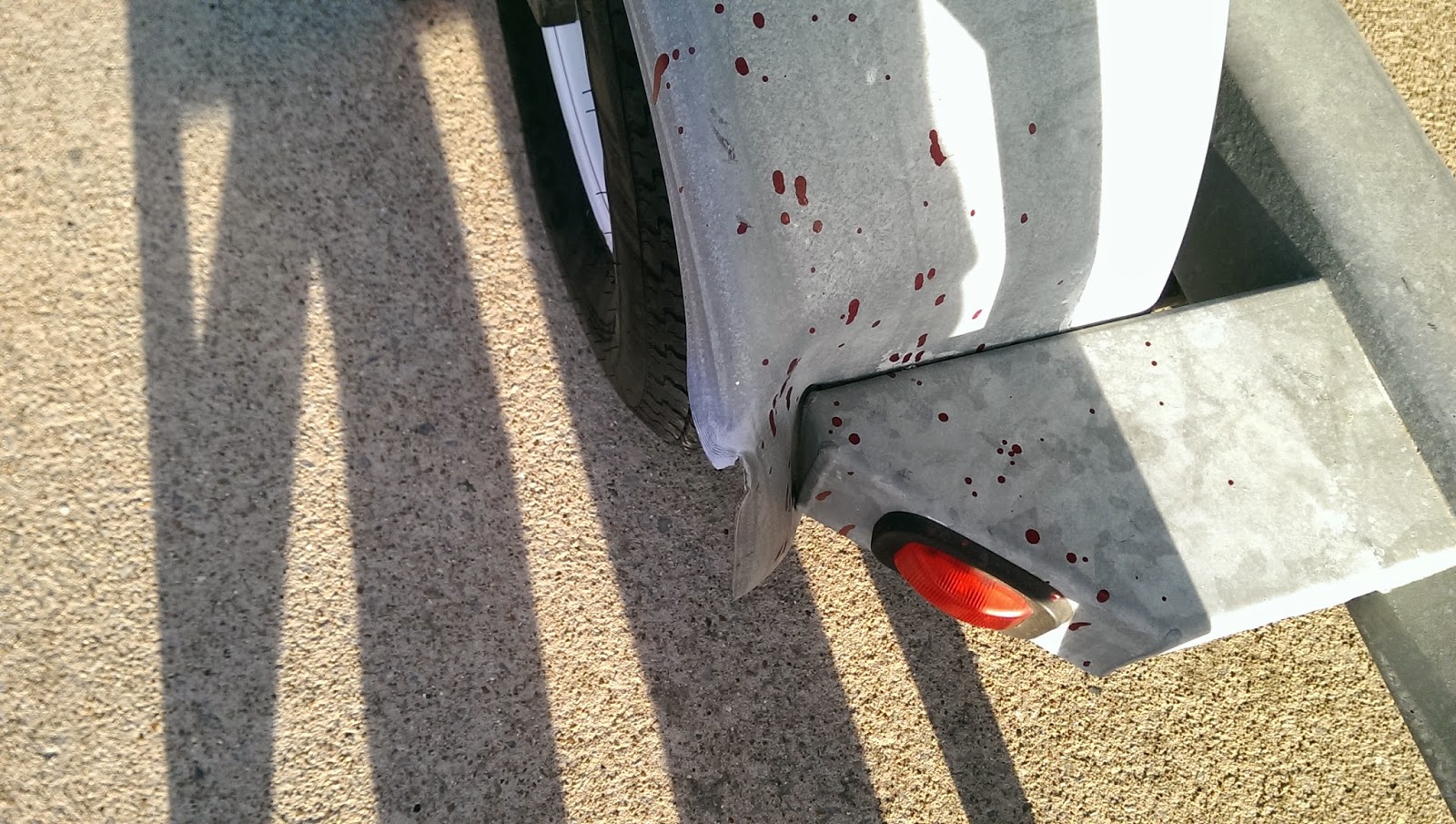 So, there it is. This week should be my last week at work, then I have a month off to move all the stuff in the house from TN to VA, find a place for the boat, and move that too. Hopefully there will be a nice day this next weekend (that's being forecasted) so I can work on taking the old bottom paint off before the move.