I finally got to go to the boat today and did a little bit of work. I had ordered some LED lights and installed them. The lights with a G4 connector had pins that were a bit long so I cut them in half and fit much better.

I took apart a winch to see its condition. It's in need of some cleaning. 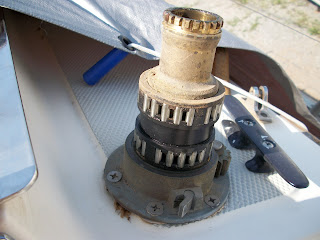 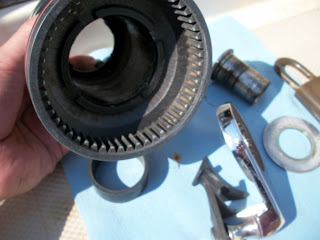 I think it needs some adjustment but I have to look closer. As it's turned, there's a spot where it gets a bit tight for a moment then spins freely again. I wiped off a couple spots but will have to do a full cleaning later. For now it functions but there's a bit too much dirt. The smaller winch, Harken 8, will also need cleaning. I'm still trying to figure out how to open up the Barient 19 winches but there's no screw in the middle of the top.

I wanted to check out the hand rail on top since one of the bolts is loose. I decided to take the whole piece off and noticed that it looks like some sort of clear caulk was used. 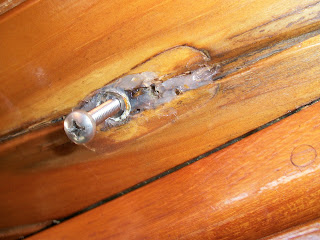 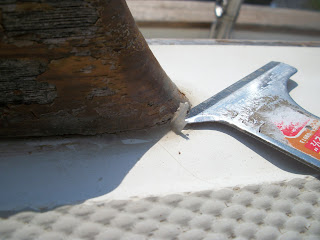 I accidentally took a piece of wood out while trying to get a washer out of the groove it was in. This spot looked to be slightly damaged from a leak but doesn't seem all that bad. 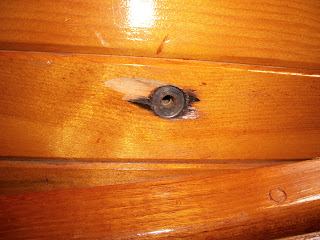 Here, you can see I took the whole handrail off and found a bunch of the clear caulking again. I have some white LifeSeal caulk that I can use to seal it up when I replace the rail. I'm thinking to take off all the rails to rebed them. 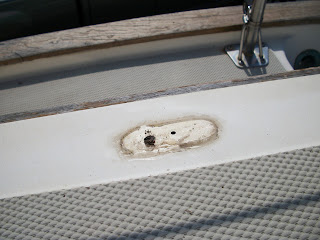 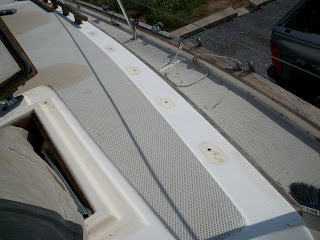 It'll take some cleaning up to get the old caulk off. Since I took the whole rail off, I decided to bring to the house so I can get the old varnish off and get it ready for varnish, whenever I get to that part. The area that is exposed is covered by a tarp. If I do take all of them off, I'll have to get another tarp to make sure I cover the rest. So far, it doesn't look like it'll be that bad of a job.
Posted by Dan at 10:16 PM