Over the last couple weeks, I have been looking at how I can at least get the mast up. Other owners are able to raise their own masts. I happen to have a video on the boat made by another owner. Have watched it several times over the past week alone.

Got some clevis pins and test fit one of the spreaders. 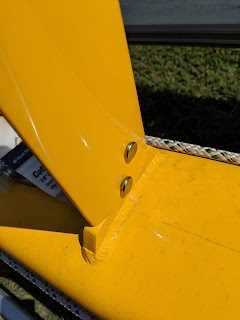 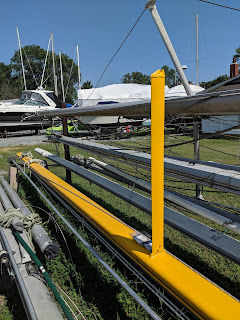 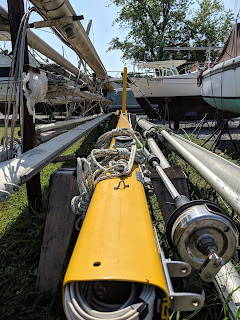 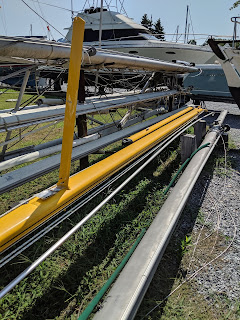 Before deciding to try self-raising the mast, I was talking to the manager at the marina about it and for them to do it, the boat would have to be in the water and they use a forklift to lift the mast.

I figured, I now have the last seacock installed on the boat. Maybe if I can get it to FLOAT long enough, I can get the mast up. I pulled out the shaft and coupler hardware to install that to the engine... But, it didn't line up. Great, now I need someone to help align it since it's pretty far off. Well, I'll figure that out later. This is where I seriously considered raising the mast myself. 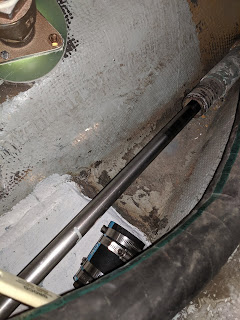 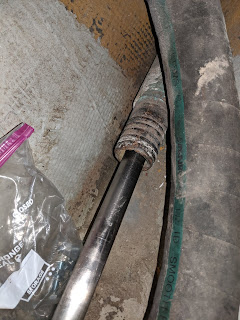 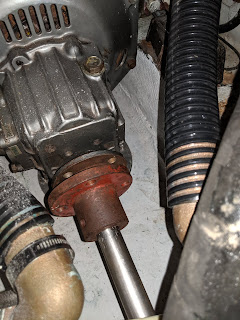 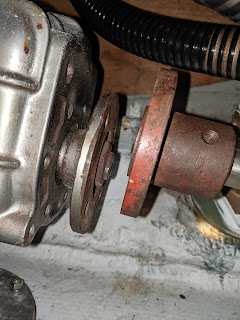 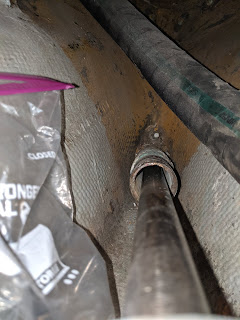 Back to the mast. Yesterday, I looked around at it. Pulled out the standing rigging to lay it all out. The main part of being able to raise the mast seems to be a modified shroud. I just need to shorten the long shroud to the level of the mast step tabernackle and add a shortened piece below it to the chainplate. Sounds easy enough but will take some planning. I looked at the video a few more times in the boat.

Aside from needing to modify the shroud, I will need to come up with a holder for the mast at the bow rail. Others have used bow rollers, but the one's I've seen are pretty expensive. I'm looking into plywood, at least for now, that can hold the mast at the bow, and prevent it from wanting to roll over.

Took some measurements around the mast bottom. I also took a turnbuckle and a triangle plate I luckily found locally and set it out trying to visualize the mod. 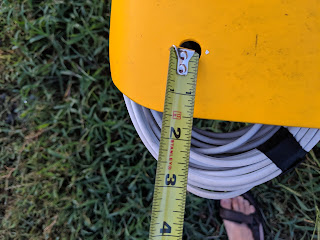 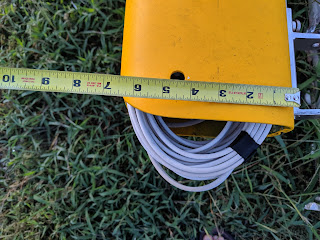 Here, I'm just trying to get an idea of how I would do this. And, where I would cut. I also looked at the turnbuckle trying to decide how much slack I should put in it. With it opened up, it was about 11 inches, but with all the threads in the turnbuckle body, it made it 3 inches shorter. Maybe I could have it 1 inch shorter and that could give me some room to tune the rig when it's up. I tried measureing the chainplate to the mast step height difference, but may need to do it a couple more times, just to make sure I cut the shroud at the right place. 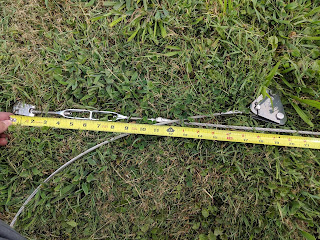 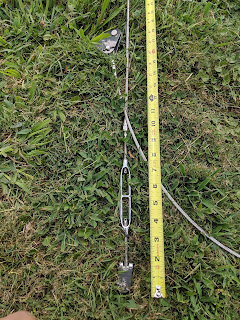 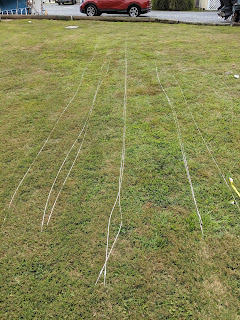 pushed the wires in, to get this measurement and something flew out and stung me. Not too bad, but it hurt for several minutes. I was getting an idea of size for bow support. 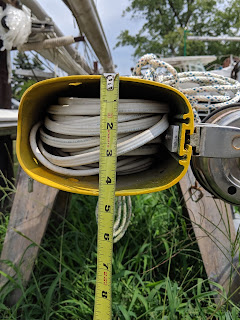 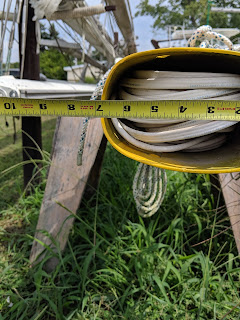 Ordered some hardware for the modification. So, until I get that and look over things some more over the next couple (few? several?) weeks, I won't be doing too much with the mast. Hopefully this idea goes well.
Posted by Dan at 11:48 AM