This past weekend was very productive. I got some work done on the electric bilge pump. Everything was previously mounted on a wooden board but got a piece of plastic board and remounted everything on it. The pump is at the bottom, with the float switch just above it. The next float switch, I used a yellow plastic scraper to mount, is for the bilge alarm. At the top, you can see all the wires, it's a relay switch. For the most part, everything is mounted the way the boat came. If you look closely at the closeup of the wiring/relay, you'll see a yellow and brown wire that isn't connected to anything. It was previously wrapped in electrical tape. It goes to the bottom float switch but no idea of its purpose. It's kept tied high from any possible water contact.

I still want to work on the manual pump by replacing the rubber pieces but the screws holding the flappers inside the unit doesn't want to budge. Going to try spraying some PB Blaster to see if that will help loosen things up. Otherwise, there doesn't seem to be much I can do with it.

After the bilge pump, I worked on mounting the base the Airhead is sitting on. All this time I've had the Airhead, it wasn't really secured. I had a small tube of LifeCaulk on hand, put a bead of it around the hole the old holding tank sat in, then screwed down the base. The vent hose was also not attached to the Airhead itself. I haven't used the head yet, so didn't have a need to. I got the hose cut down enough to connect everything together and now it's ready to use. 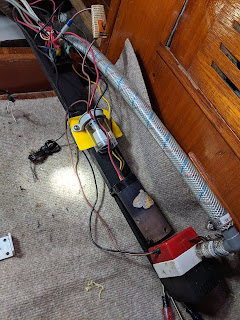 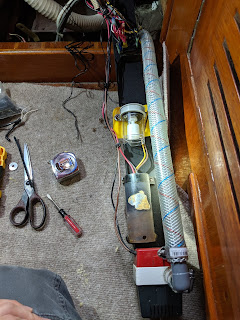 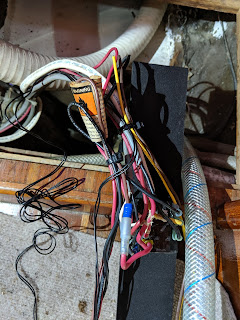 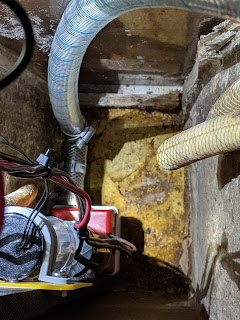 Didn't get any other pictures, but this is just screwing down the Airhead base. Predrilled the base for the screw to pass through but a smaller hole drilled below for the screw to bite into. 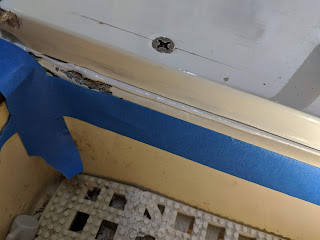