It's been a little over a month since I visited the boat. One of the inspection ports on the fuel tank, while covered, wasn't bolted down. I decided to bolt it down and saw water drops coming out from the rubber seal. I opened it up and found the tank almost full of water. Surprising as I didn't realize that much water was in there. When I first installed new seacocks for the cockpit drains, I didn't put sealant on them right away. At least, not until I saw a little water sitting on top of the tank. Didn't think then to look inside. While the tank was filled with water, the bilge was dry. So, it'll at least hold fluid. To get the water out, I decided to get one of the water hoses laying around the boat yard to siphon it out. Went to the local hardware store to get a drill powered pump and got it started. once the siphon started, I disconnected the pump so it would flow out on its own. Then went inside to make sure the hose was at the bottom of the tank. 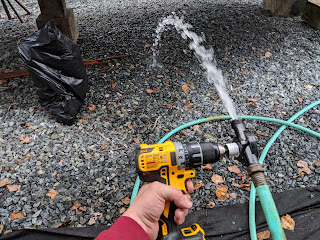 I left the inspection port uncovered so any moisture in the tank could evaporate. Good thing I removed the water when I did. The temperatures the past month has been in the 20s (highs) for quite a few days at a time. don't need that freezing.

The seacocks I installed are now sealed up, but I only have 3 installed. I still have one more to install for the cockpit drains. It'll take a little more time to get that setup as it's next to the little shelf the old water-lift muffler sat. So the backing plate is probably going to be triangular instead of round like the others. The hose on the seacocks are a bit annoying. Every time I try getting them on, they don't go very far and can get only one hoseclamp around it. For some reason, not enough hose gets on the barb for two clamps. I've been using Dawn dish soap to lubricate the hose and barb, but still nothing. They sure are a tight fit.

This weekend, or rather yesterday (20 Jan), I visited the boat and installed the wiring harness on the engine. Finally found a reference in the service manual... on the very last page... for were the wires went. The wires are color coded so that helped. There was a couple things I wasn't quite sure on so I looked at older pictures I took to see where they went. Now, the only thing left is to run a power cable from the battery supply to the engine. I have some 4 ga. wire laying around that I can use, and just need to order connectors. I'll get them from genuinedealz like I did previous times.


Some of the little stuff is what really adds up in getting things ready. So, in addition to running power to the engine, I still need to reinstall the exhaust hoses and new water-lift muffler. I also need to connect the fuel lines, make a vent hole in one of the inspection plates, install new stuffing box, replace cutlass bearing and some other things before I get to working on the bottom to prep it for barrier coat and bottom paint. I hope to launch this year, but like always, we'll have to see how things go along the way.

I recently ordered brakes for the trailer. I was thinking to work on that this weekend but right now I'm looking at putting the effort towards the boat to get ready to sail again first. Until then, the brakes are sitting at the house. I'll post more on that when I actually do the work on it.
Posted by Dan at 2:11 PM