Yeah, I know, it's been a while without any updates. Unfortunately, there isn't too much to update right now.

I moved from Tennessee to Virginia, near DC. The boat, is still in TN. So, not much I can do. I've been to a few places looking for storage of the boat. They all have long waiting lists and it is so much more expensive between VA and MD. Still, the boat will come eventually.

I do have my spreaders with me. The paint was raised in a couple spots along with some pitting. There's a high concentration of pitting around the ends. I wanted to repaint the mast, eventually, so I decided to start with the spreaders since I have them on hand. I sanded down the paint. The hard part was getting it out of the grooves around the welded part on the end.

I cleaned them up pretty good, I think. I got some Alumiprep 33 and Alodine 1201. With these two chemicals, they are suposed to clean the metal and protect it from additional corrosion. Next will be zinc chromate primer that will start the rest of the process of the paint job... which will come later. 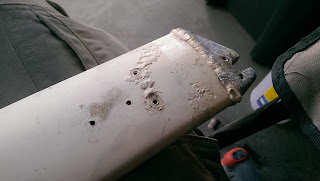 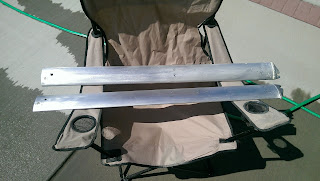 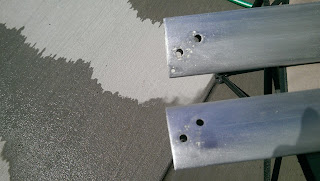 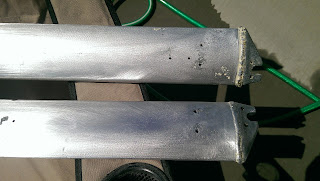 ﻿
I also have my tiller and rudder cheeks. Those are getting some coats of varnish and will be standing by until it's time to put on the boat again.

Well, I have an idea for replacing the fuel tank. When the boat is here, I'll start work to remove the engine and the old fuel tank and prepare for the tank replacement. Since the engine started to rust, I need to take care of that too. While it doesn't really need a full overhaul, I might have to, to clean the rusty areas off of it. Anyone have ideas?

I'm looking at getting some supplies, like seacocks and pump service kits (bilge/galley pumps), I can work with until I can get on the boat but some things, I need to be on the boat to confirm exactly what I need, like the water-lift muffler size.
Posted by Dan at 2:32 PM