July 7th, I got up early in the morning, still dark out, and put a ramp I made on the bed of the truck and pushed my engine into the bed. This day was to put the engine back in the boat. The engine, a Yanmar 2GM, has been sitting in the garage at the house for the past 1.5yrs.

The marina staff were busy a good part of the day launching three boats so I had to wait a while. Once they got to me, the owner put a boom on the end of the forklift, got the engine out of the truck and into the boat. The engine was set just below the companion way, where it sat for two weeks. 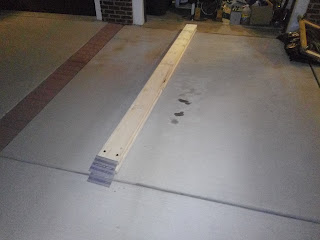 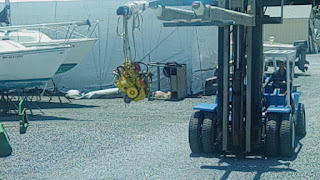 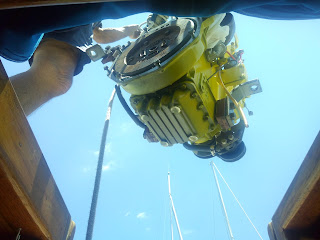 Fast forward to 15 July, I left the house early, again. It takes about 1.5hrs to get to the boat. By the time I arrived, it was almost 7am. The tarp I had over the cockpit last visit wasn't doing too well. Water was pulling it down and stretched over the rails, it was tearing apart. I was sure water got in the boat from recent rains.

Once the tarp was pulled off the boat, I got to work. I've been doing a lot of work on the boat for the past couple years so it was getting dirty. I took everything off the boat that wasn't put away somewhere. I vacuumed then cleaned/dusted the galley and the salon/v-berth areas.

Next thing I did was having to move the engine. While I can write about it, this video explains how that worked out.


Once the engine was in place, I started to put things back into the boat. I started by vacuuming the cushions. Not only were they dusty, but they also had some fiberglass pieces on them that needed cleaned up. I plan to replace them in the future but they will be usable for now. I started to clean things and put things away, but after a while, the sun was getting low so I just piled stuff into the quarterberths where I will organize during future visits.

One thing I should mention, it was HOT out. The thermometer on the boat said 95-97° most of the day. I was sure I was drinking water about as fast as I was sweating it out. My clothes were getting soaked and my eyes were burning from the sweat and red/sore from wiping it off.

I cut out the old seacocks and hammered out the thru-hulls from the cockpit drains. I used a reciprocating saw I just bought in order to cut through them, then a dremel to cut through the nut holding the thru-hull out. I ended up going to Home Depot to buy some 1.5" hose and using that for now to keep water draining out of the cockpit when it rains. This solution will work out temporarily until I can get the new seacocks installed.

With the engine out of the way, I was able to check the bilge. Turned out, it was full. I routed the hose for the manual bilge pump back into the bilge, went up on deck and pumped out most of the water.

Lastly, before leaving, I decided to try setting up the dodger for the first time. The previous owner told me a little about how it went together, but I haven't set it up myself yet. Trying to get the hand-holds on were frustrating so I left them off for now. I'll try looking at them again next time. The cover was very tight against the frame. I'm looking to replace the dodger canvas in the future to a different color. Right now, it'll work out for now to protect the companionway and to divert rain water away from a couple spots that are a little leaky.

I didn't take pictures of the dodger but will post here when I visit next time.

But here is the dodger laid out in the driveway as I was identifying the pieces. 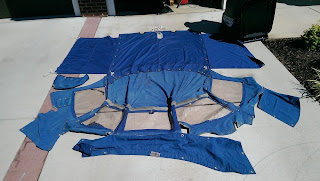 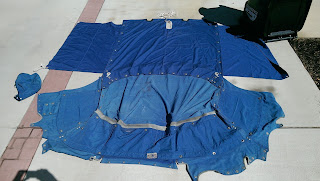