Last weekends visit to the boat didn't go as planned. I ended up leaving my cordless drill AND the drill bits at the house. Still, I didn't waste the day. I decided to look at one of the two light fixtures by the galley. This one I looked at has a rocker switch that goes one way for white light, and the other way.... didn't work.

Took it apart to see little compact fluorescent lights. One, on the side that wasn't working, with a red cover over the light for night time viewing. When I took down the fixture, I saw on the circuit board what looked like a diode had burned up and melted part of the fixture housing. Now, this side of the light has not worked since I bought the boat, so someone somewhere was probably very lucky to not have an electrical fire on board.

I thought of replacing the whole fixture but then talking with someone about that possibility, it was suggested I do something with LED strips... then remembered I still had some left over from lighting up the head. So, I got right to work taking out the circuit board out, and putting in a couple strips of LEDs. So, like it was originally intended, one side is white, and the other side is red. 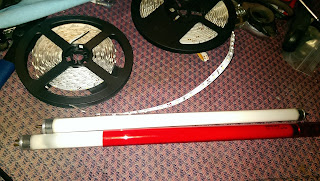 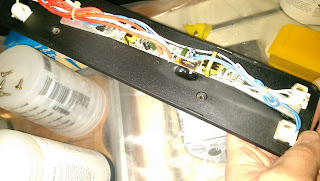 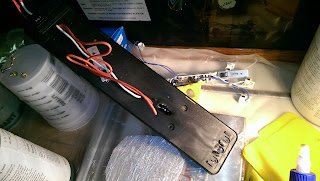 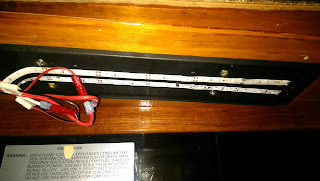 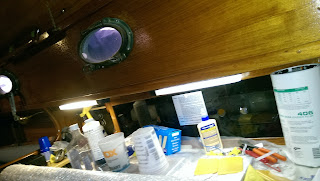 So that was last weekend. For this weekend, so far, I finished the last bit of wiring today. Since I had a breaker panel made for the nav desk, I still needed to get power to it. I took 4 gauge wire and with some drilled holes, routed it halfway down the boat to the nav desk.


So now, I have a working VHF radio. I still need to route new RF cable between the radio and the bottom of the compression post where the cable going up to the masthead antenna will be connected.